You are here: Home>Places>Places of worship>St Mary's, architecture and monuments>The History of St Marys: A Personal Interpretation

The History of St Marys: A Personal Interpretation 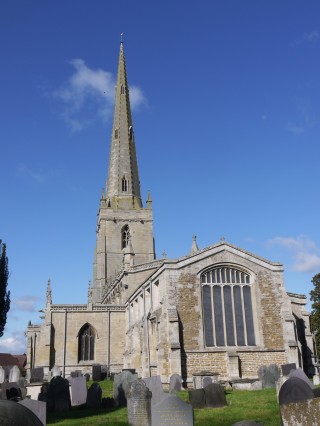 St Marys from the east. 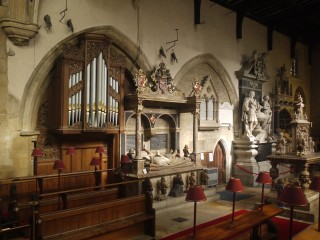 Two early arches in the north wall of the chancel. 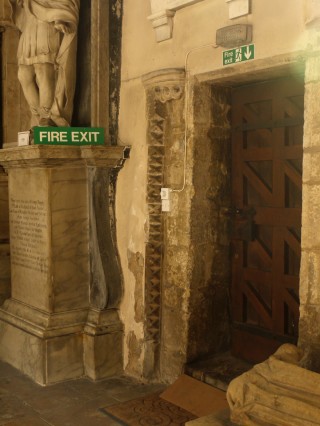 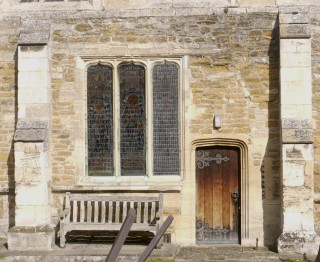 Exterior of the chancel showing traces of dog-tooth ornament and the line of an early arch embedded in the masonry above the more modern doorway. 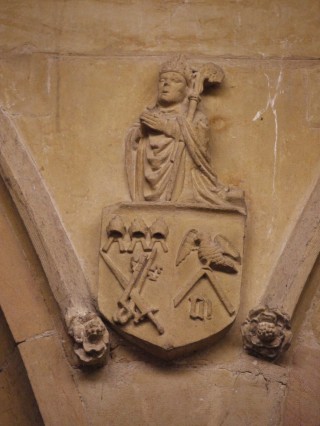 Above the eastern column of the S arcade of the nave: shield bearing the arms of the diocese of Llandaff and of the Marshal family, surmounted by a copy of the tomb effigy of Henry Marshal, Bishop of Exeter. 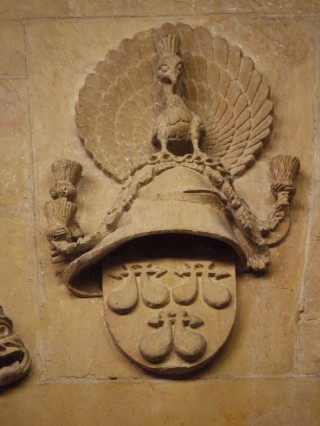 Above the eastern pillar of the N arcade of the nave: shield bearing the arms of the de Roos, beneath the Cap of Maintenance and the peacock resplendant.

In St Marys we have a beautiful medieval parish church, aptly described as “The Lady of the Vale”. It is about eight hundred years old, spanning over half the entire time since the Saxons converted to Christianity. It is larger and more ornate than other village churches in the vicinity, and in its detail is well preserved due to the extensive use of hard-wearing Ancaster stone and the location of Bottesford away from sources of acid pollution.

It is clear that St Marys was built in stages over a prolonged time starting around 1200. However, in simplified terms we can say that three successive medieval churche buildings have stood on the site, which was probably also the site of a Saxon church of which nothing remains. The third of these medieval churches is substantially what we see today, though it has undergone further alterations during the 16th Century and at intervals since then.

In discussing St Marys I am drawing on a variety of sources including John Nichols’ History and Antiquities of Leicestershire (Volume II part 2, 1795), E.A. Shipmans’ Guidebook to St Marys and his Gleanings about the Church of St Mary the Virgin Bottesford, Michael Honeybone’s The Book of Bottesford and The Vale of Belvoir, M.W. Tisdall’s God’s Beasts (1998), plus many talks by and conversations with Mike Saunders, John Daybell, Bob Sparham and many others, to whom I am greatly indebted. Other sources include Wikipedia and the Oxford Dictionary of National Biography. All the mistakes, muddles and oversights are of course my own.

The underlying idea that I am pursuing is that the building and decoration of St Marys reflect the history of the Vale, in particular the ambitions of the successive lords of Belvoir, owners of Belvoir Castle and its estates which include the parish of Bottesford. In this view, the development of St Marys resulted from the interplay between the mission of the Church itself and the need of the lords of Belvoir to cement their status and authority. Though these overlords had already established a Priory at Belvoir itself in the 12th Century, the major concentration of estate population was around Bottesford, and they had a manor house at Easthorpe. Establishing a single central church at Bottesford, replacing older, smaller churches at Easthorpe, Beckingthorpe, Wimbishthorpe, Normanton and Bottesford itself, reinforced their authority and simplified administration. Attendance at mass was compulsory for all 500 or so people in medieval Bottesford, so the new church would have had to be large simply to cram them all in.

Bottesford is well represented in the Domesday Book. Michael Honeybone pointed out that ‘Bottesford’ is an anglo-saxon place name (‘Botelesford’ – the house by the ford), whereas the three ‘thorpes’ suggest settlements of danish people during the time of the Danelaw. Bottesford was right in the middled of the Danelaw. Normanton was where the norman knights named in Domesday settled, according to Nichols.

There was evidently a substantial community by 1086 which may have had one or more churches, possibly located in separate communities of Easthorpe, Beckingthorpe, Wimbish(West)Thorpe (The Nook), Normanton and Bottesford. These may well have been built of timber and thatch. Interestingly, traces of old churches were visible at Normanton and Wimbishthorpe within the 19th Century and perhaps into the 20th. Writing in 1845 Andrew Esdaile also referred to separate churches in each of the villages in the Bottesford area. A saxon font dug out of the garden of Rutland Flats by sexton Tommy Robinson during the 1930s can be seen today in the south transept of St Marys. St Marys may be on the site of the saxon Beckingthorpe church.

Relicts of an early medieval church building are preserved at St Marys in the form of two arches enclosed within the north wall of the chancel and traces of a pillar and arch with dog-tooth ornament seen in the south wall of the chancel inside and out. These have been interpreted as remains of an early nave, which would have been flanked by aisles that have since disappeared. They thus indicate that the present chancel is on the site of, and preserves the width of, the nave of this early building. It was evidently a substantial building, but its full size is not known, and no archaeological investigations appear to have been made. Did it have transepts or a tower? Did its sanctuary and altar extend further east than the eastern wall of the present chancel? These early arches have short pillars, much shorter than those in the nave of the present church, suggesting a lower roof. Those in the north wall of the chancel are smooth and cylindrical, in contrast with the dog-toothed decoration of the pillar and arch opposite. They may represent two phases of this early church building, a transitional-romanseque south aisle and somewhat later Early English north aisle.

According to records in St Marys, the first rector of Bottesford, installed in 1209, was Nicholas d’Albini, youngest son of William d’Albini III. He was succeeded in the same year by one William Capellanus, yet it was the original rector Nicholas d’Albini who surrendered Belvoir Castle to King John during the wars of 1216, before being excommunicated and then imprisoned by King John. In 1220 Ralph de Albini became rector. He could have been one of the family of Ralph d’Albini, brother of William d’Albini II (hence an uncle of William III), though the genealogical table in Nichols (1795, Volume I Part II, p.27) does not confirm this supposition. At any rate, Ralph was succeeded in 1224 by one Henry Bokeby, and then in 1234 the next rector was Nicholas de Belvoir, presumably another member of the d’Albini family. There is thus the strong indication that the d’Albini lords of Belvoir built this church around 1200 and remained its patrons until 1257 when Isabel d’Albini married Robert de Roos.

It has been said that the church was in fact founded by Henry Marshal, Bishop of Exeter. In Gleanings about the Church of St Mary the Virgin Bottesford Ted Shipman tells us that “three natives of Botteford named Mareschall are recorded in the church’s history between 1193 and 1497. They are: Henry Mareschall, who was the Prior of Abergavenny in 1193 and became Bishop of Exeter 1194 to 1206; John Mareschall, who owned a manor in Bottesford in 1282 [see also Nichols, p.87] and who left money for an early church in 1295; John Mareschall, who became Bishop of Llandaff from 6th September 1478 to 1494 and who died after 1496.” Ted Shipman adds that “John Nichols records that the north side of the church can be ascribed to the Roos family and the south side to Henry Mareschall. The arms of Roos and those relating to the Mareschalls are appropriately displayed above the eastern pillars of the nave.” [The old form of the name, Mareschall, was used rather than the modern form Marshal]

Ted Shipman’s Church Guidebook says, “Note the two shields above the most eastern pillars. The one on the north shows the de Roos Arms (three bougets) above which is the cap of maintenance, and this is topped by a peacock in full pride which is the crest of the Duke of Rutland. Above the south pillar the carving shows Henry Mareschal (Marshall), Bishop of Exeter 1194-1206 and a native of Bottesford, kneeling on a shield which depicts the Arms of the dioceses of Exeter and Llandaff. In 1193 he was prior of Abergavenny and his monument is in Llandaff cathedral. John Mareschal, also a native of Bottesford, was the Bishop of Llandaff about 1495.”

This seems to be a bit mixed up. Henry Marshal, 8th Bishop of Exeter, was the youngest brother of William Marshal, 4th Earl of Pembroke. William was a famous baron and a mighty warrior. Stephen Langton, Archbishop of Canterbury (1207-1228), described him as the “greatest knight that ever lived”, and he is said to have defeated over five hundred other knights in the tournaments. He was a powerful, influential, supporter of four kings, Henry II, Richard I, John and Henry III (whose survival he ensured by leading his victorious army against Louis at the Battle of Lincoln, 1217). He was one of the signatories of Magna Carta, along with William d’Albini III.

Henry Marshal was Dean of York (1189-1194) then Bishop of Exeter till his death in 1206. This period coincided with the building of the first St Marys, but the first rectors of Bottesford were d’Albinis, not Marshals. In addition, the records tell us that there was a man named Henry de Abergavenny who was Prior of Abergavenny and then became Bishop of Llandaff, 1193-1218, but he was not Henry Marshal.

There was a John Marshal who in 1282 owned a manor in Bottesford and left funds for “an early church”, presumably St Marys, on his death in 1295. This was within the era when the de Roos family had become lords of Belvoir and were probably rebuilding the original c.1200 church.

It is reasonable to conlcude that the Marshal family held land in Botteford in the 12th Century and contributed to the building of the 1200 church, alongside the d’Albinis. Then near the end of the 13th Century they again gave money towards the re-building undertaken by the de Roos.

There was another John Marshal, who became Bishop of Llandaff in 1478 and died in 1496. Provided that the coat of arms of Llandaff in the shield above the south pillar of St Marys do indeed commemorate this bishop, then the shield confirms that this John Marshal was connected with Bottesford and may well have been a descendent of his namesake of 1282. Mike Saunders has pointed out that the figure of a bishop displayed on the upper part of the shield is a copy of Henry Marshall’s tomb which can still be seen in Exeter Cathedral.

The attribution of the shield to John Marshal Bishop of Llandaff would also indicate a date after 1496 for it and by implication for the other carvings on the pillars of the nave. This is consistent with the shield on the opposite side of the nave, which combines emblems of both the de Roos and the Manners families. Around 1500 Edmund de Roos, last of the direct male line, was still alive but Sir George Manners was residing at Belvoir Castle and had the title Baron Roos, being the son of Sir Thomas Manners and his wife, Edmund’s sister and coheiress Eleanor.