You are here: Home>Places>Places of worship>St Mary's, architecture and monuments>A guide to Hatchments on display in Bottesford Church

A guide to Hatchments on display in Bottesford Church 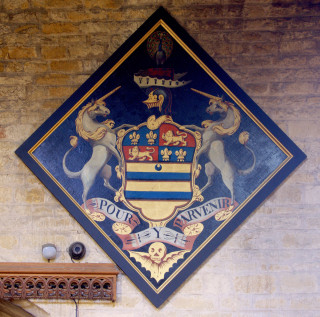 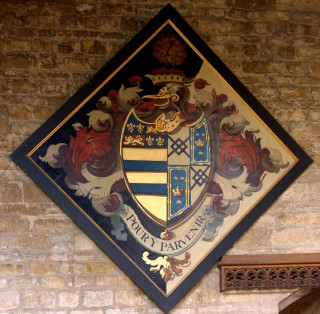 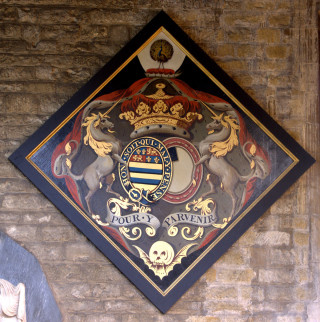 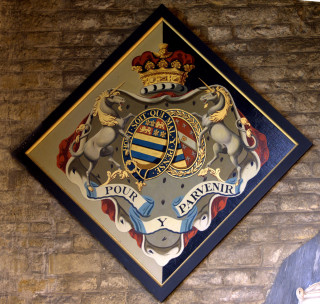 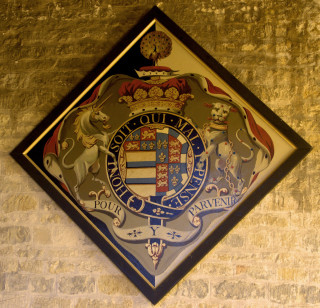 Throughout the country one can see hatchments on display in many parish churches. Few church visitors are aware of the origins of these diamond shaped panels attached to church walls or hidden away in inaccessible places. Encased in a wooden frame and made of canvas or wood, the panels exhibit heraldic details, insignia of the person to whom they relate.

It is believed that hatchments originated on the continent of Europe and were carried in procession at the funeral of a Knight or Noble in Medieval times. Hatchments were erected in churches following interment. In some cases a hatchment was commissioned and hung on or over the door of the house of the deceased during a period of mourning and later taken to the church of burial.

The word hatchment is derived as a corruption of a Knight’s Achievement, the insignia on his shield and helm (helmet), his individual identification.

In some cases, surrounding the Coat of Arms, a death’s head and crossbones would indicate that the deceased was the last of the family.

This page reproduces a display mounted in the church in November 2013 on behalf of the Friends of St Mary’s Bottesford.

Elizabeth Howard, daughter of Frederick the 5th Earl of Carlisle, came from Castle Howard, Yorkshire. In 1799 at the age of 19 she married John Henry Manners, 5th Duke of Rutland K.G. It was Elizabeth who remodelled Belvoir Castle to her own designs in the early 19th Century. Her funeral procession in 1825 was the largest event ever organised at Bottesford Church.

The Hatchment depicts a white background dexter (left as you look at it) and a black background sinister (right as you look at it). Above the centre of the shields is a Duchess’ Coronet. The shield to the left is the Manners Coat of Arms, bars blue and gold surmounted by lion and fleur-de-lys, surrounded by the Garter.

The shield to the right bears the Howard insignia impaled by Manners. A white diagonal bend on a red background bearing the augmentation of Flodden (a small rampant lion on the white bend). Note six silver cross crosslets fitchy on the red background.

A keen hunter, the Duke was responsible for establishing a pack of hounds at Belvoir from which the present packs of Belvoir and Cottesmore are descended. Affectionately known as “John of the Hill”, he was also an accomplished painter and collector of art works, and father of the famous Marquis of Granby.

In 1765 John married Lady Louisa Tollemache, afterwards in her own right Countess of Dysart. There is another hatchment for John in Grantham.

This Hatchment, with a black background dexter (left as you look at it) and white sinister (right), is a single shield surmounted by a peacock standing on a chapeau. The shield to the left (dexter) depicts the Manners insignia and to the right (sinister) the Tollemache arms, a black fret 1st and 4th quarters, second and third quarters an imperial crown between stars within a double border (tressure flory, counter-flory).

Thomas was the second son of John 1st Duke of Rutland and Catherine Noel, daughter of Baptist Noel, Viscount Campden. Thomas Baptist Manners died unmarried in 1705 and was buried at Bottesford.

Charles, son of the famous Marquis of Granby, inherited the title from his grandfather in 1779. He was passionate about the arts, a friend of Joshua Reynolds and an ardent gambler. From 1784 until his death he was Lord Lieutenant of Ireland. He married Lady Mary Isobel Somerset, youngest daughter of Charles, the 4th Duke of Beaufort. Lady Isobel was a renowned beauty and society lady of her day. The duke died in Ireland and many hundreds of mourners lined the route of his funeral procession on its way back to the family mausoleum from Bottesford church.

The Hatchment, within a black background dexter (left as you look at it) and white sinister (right), surmounted by a Duke’s coronet and within the Garter, depicts Manners impaling quarterly France and England within a border blue and white Somerset. Note the supporter to the shield, a unicorn and a panther collared and chained.

Motto – “Pour y Parvenir” – literally ‘In order to achieve or succeed’ but better translated as “To Attain” or “Strive to Attain” (look it up in Wikipedia!).