You are here: Home>Topics>Friendly Societies>"That was a day for a top hat"

"That was a day for a top hat" 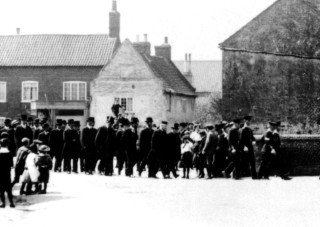 The tradition of self-help
Before the rise of the familiar institutions of the Welfare State, people had good reason to look to their own resources to cope with sickness, unemployment and insecurity. All over the country, clubs were started for the purpose of pooling cash to create a fund that could be called upon during periods of hardship. Bottesford was no exception, and by the end of the 19th Century there was the Bottesford Friendly Society, branches of the Oddfellows and the Forresters, a Cow Club and a Pig Club.

It is clear that the Bottesford Friendly Society was the earliest, and perhaps the longest lived, but its membership appears to have been smaller than that of the Oddfellows by the end of the 19th Century (Honeybone states that they had 175 members by then), and Forresters were also well supported. The Cow Club was intended for cottagers and small farmers who kept one or two cows, and were therefore particularly vulnerable if one of their animals became sick or died. The Pig Club was similar, again reflecting the extent to which villagers still kept one or two animals for fresh meat.

An eye-witness account
The Late John Sutton described the annual parade and meeting of the Oddfellows and Foresters, on successive days just after Whitsuntide during the late 1900s. His remembrances, written to his niece Dorothy Brewster in the 1930s (and reproduced by Michael Honeybone in the Book of Bottesford), give a vivid picture of one of the high days of village life during Queen Victoria’s reign:

“The Bottesford Feasts
I think the best two days in the year when the people enjoyed most was the Thursday and Friday after the Whitsuntide bank holiday. They was the days when the Oddfellows and Forresters held their annual Club meetings. For several weeks people was preparing for it. The shop keepers had to get in extra rations. The two Red Lion & Rutland Arms had to do extra brewing. Scrubbing brushes was worn out by people cleaning their front door steps. Flags was got out and put up, the Union Jack on a long pole tied to the cross. A large booth was put up in the Rutland yard the length of which is now the car park, and a smaller booth in the Granby yard. That was a smaller club. The food for the meal was roast beef baked by Mr Martin in his bake house opposite, vegetables done at the Rutland. Cold apple pie and cream. Thursday was the special day. Members who had left the village came to take part, and a good many wifes with children in the pram, as they knew some relations would make them welcome. The gathering started at 11 o’clock in Queen St. The crowd was a sight, every body in their best clothes. The only day in the year some of the farm workers could dress up. One or two, I really did not know them. A good many in top hats, that gave a good many a good laugh, for some hats was too large, some had a small one, some was like a chimney pot straight. Nothing mattered. That was a day for the top hat. Then there was the large banner, a lot of the members wearing rosettes, sashes, all a very grand sight. The secretary called out the name of the members. I don’t think any one was missing, or the number of members about 30 I don’t know. Any way, the band strikes and the procession starts for the church. Each man has his staff with the acorn on top. Arrive at the church, the band each side of the path while members walk in, the band stops before half are in, then Mr Moore starts a lively tune on the organ. The church is half full, the middle is kept for the members. It’s just a short service and an address by the Cannon, the singing of Fight the Good Fight. I can hear it now. The church bells did not ring, but a ringer rung the chimes, six bells rung by hand. They have done away with them now. You could play hymns on them. Back to the club from church. All go back to the booth for dinner, the band leading the way. After the meal of course speeches. I have heard several talk about what took place of course for several years. They got Lord Cecil Manners for Chairman, he was member of Parliament so he had plenty to talk about, and tell them a few happy yarns. After his talk they gave him musical honours. The band starts playing them, then all sing for he’s a jolly good fellow. I should think before he speaks the secretary has read out the balance sheet. I’m sure that would not take long, many would not understand it but vote all in order and correct, cheers and drinks. The other votes of thanks to the Duke of Rutland, the visitors and others with the band, then 4 o’clock all home for tea. All meet at the Cross at 5 o’clock, a parade round the village to the Rectory for the Photo taking, and a welcome by Cannon Jackson and wife, and a great many who wished to do a little dancing. Then back to the booth for a social evening, singing and dancing, to end a very happy day for a good many.
Friday’s club was on a smaller scale, not such a large club, but carried on the same way as the day before. The dinner was held in a booth in the yard at the back of the Granby in Queen Street. To keep us boys out the gates was closed and locked, members had to go through the front door. We did not mind, for during the three days in Dan Daybell’s stack yard and a lot of fun in his paddock was every kind of amusement, the only draw back was the shortest of pennies. “