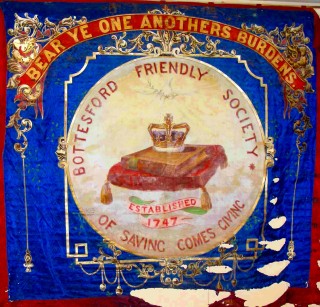 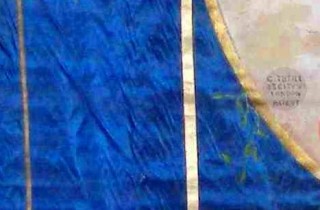 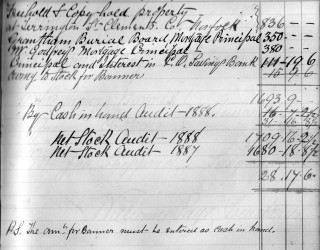 The Bottesford banner gives C. Tuthill, 83 City Road, London as its maker. The date of manufacture is unclear. However, research shows that a banner-making firm was established by George Tuthill in 1837. Could  ‘C.Tuthill’ be from the same family?

Originally made from pure silk woven by Huguenots in London, a banner would be composed of a central panel bearing the motto or name in ‘strap lines’. They would often have a vignette on either side. Many designs were taken from the Bible.  They hung from a horizontal rod supported by two vertical poles.

In the 19th Century over 75% of banners were made by George Tuthill in Chesham, Bucks. Tuthill’s methods grew out of  fairground traditions from which he developed the technique of oil painted, double-sided silk banners which continued to be used for 150 years. While few Union banners survive from the 19th century, there are significant numbers of surviving Friendly Society banners.

A marching banner would be a valued possession. Expensive to produce, they were very vulnerable to fading and damp. The signs of such damage are clearly visible on the Bottesford banner.

The Bottesford Friendly Society’s purchase of this regalia would have been a major investment. The design and the date 1887 suggests it was bought in celebration of Queen Victoria’s Golden Jubilee.We do not know if this was a replacement for an earlier banner. There are some references to this banner in the accounts, though no straightforward note of its purchase. The first reference we have found so far reads:

The Stock Account is an old form of account showing what the organization owns, like the ‘assets’ section of a modern balance sheet. Perhaps in January 1888 it had to be shown as ‘cash in hand’ because the society had paid for it but was awaiting delivery. As an asset it was ‘written off’ over the next three years, like a modern depreciation adjustment. It then became a ‘hidden asset’. The £15.9.6d paid for the banner in 1888 represents four months earnings for the average manual worker.