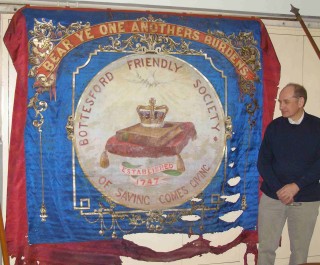 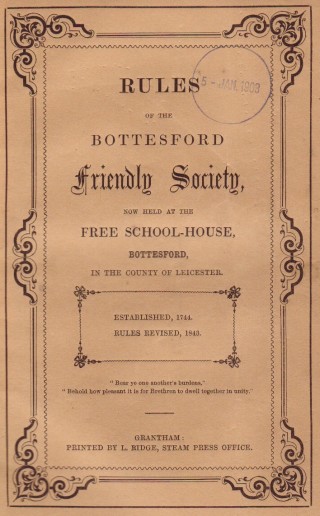 The Bottesford Living History Project has had the opportunity to examine The Rule Books and Account Books of the former Bottesford Friendly Society. These give us a list its members and their contributions and benefits during years from 1875 to 1944 and again from 1963 to 1972, when the Society was finally wound up. In addition, one of the Society’s marching banners has been displayed and passed to the Bottesford Local History Society for safe keeping. The banner had previously been in safe keeping by Mr Ian Norris. We are greatly indebted to Mr. Mike Saunders for preserving these items and granting access to them.

The records allow us to gain a clearer picture of the way the Society worked. In the following paragraphs, the accounts for 1900, 1930 and 1971 are compared.

In 1900, the Bottesford Friendly Society had 124 members who ranged from 18 to 78 years in age, all male. Most paid between 6d and 4s 6d, more or less fortnightly. A typical donation was 1s 6d paid twice a month. Most contributions amounted to about £1 1s 6d per year. The Society’s total income from member’s contributions was £132 8s 2d for the year. There was an additional investments income of £59 1s 7½d from property (at Terrington Saint Clements), mortgages and a Post Office Savings Bank account.

The Society divided its finances into two accounts, the Sick and Funeral Account and the Management Fund. In 1900, the Society’s Sick and Funeral Account recorded a loss of £46 5s 8½d, because its income was less than its payments of £184 17s 0d sickness benefits plus £25 0s 0d funeral donations. The separate Management Fund met expenses of £27 18s 6d, including £18 3s 0d surgeon’s fees.

Michael Honeybone records that the Oddfellows had 175 members at the end of the 19th Century. Adding 124 Friendly Society members and some more members of the Forresters gives an estimate of over 300 members of one society or another, not to mention the Cow Club and the Pig Club. The 1901 census recorded a population of 1221 in the Parish of Bottesford, and 268 in Muston. This suggests that a very high proportion of households included a member, probably the main wage-earner, of one or other of the Friendly Societies. However, this assumes that people only joined one of the Societies (no multiple membership), and that there was only one Society member per household – neither of which are safe assumptions at present.

In 1971 contributions were £20.38 from the 23 remaining members. Sickness payments were £31.87 and there was a funeral donation of £20.00. The Bottesford Friendly Society was dissolved by unanimous ballot at a Special General Meeting held on February 1st, 1972, in the Victory Celebration Hall.

The rise of Friendly Societies

The rise of the Friendly Societies in the 18th and 19th Centuries was of great importance in protecting working families from hardship and insecurity during illness, and helping them bury their dead with dignity. There was neither sick pay nor Welfare State provision, so that when illness prevented people from working they and their family were at risk of becoming paupers, dependent on Parish Relief or losing their home and entering the Workhouse. Friendly Society members made regular contributions, and in return were able to receive payments during periods of sickness, plus a single payment towards the member’s funeral expenses. A Society would hold monthly meeting for the purpose of collecting contributions, and these occasions were also the opportunity for a convivial social evening.

Thousands of local, self-governing Friendly Societies or Clubs sprang up especially in the 18th Century. Many were very small, and the average size has been given as about 90 members. Though most were in the industrial areas of the North and Midlands, there were also many in rural areas such as the Vale of Belvoir. With time, many such Societies realized that there would be benefits in pooling their resources and spreading their risks. Extensive multiple-branch Societies developed, notably the Manchester Union of Oddfellows and the Ancient Order of Forresters, both of which had branches in Bottesford. Oddfellows Halls and Forresters Courts became features of towns across much of the country. Other examples include the teetotalers of the Independent Order of Rechabites. Indeed, the “convivial” aspect of many Friendly Society meetings was seen by many as a misuse of resources. There was the growth of societies which concentrated their efforts almost exclusively on providing sickness and death benefits, as in the Hearts of Oak and, later, the Prudential. The Savings Banks and Life Assurance industries owe much of their origins to the Friendly Society movement.

One of the earliest

Bottesford was one of the first places in Britain to establish its own local self-help club, the Bottesford Friendly Society. Records indicate that this it started in 1747, and that it continued to operate up till the early 1970s, spanning over 200 years. Gosden records that the main period of expansion of the Friendly Society movement dates from the 1760s. Few were created before this time. The oldest was started in Bethnal Green in 1685. Gosden reports that only three were registered in England during the decade from 1741 to 1750: it is likely that the Bottesford Friendly Society was one of these. Gosden also states that by 1815 there were 17,217 members of registered Friendly Societies in Leicestershire, and that by 1821 membership had reached 10 in every 100 people in the county.

It is worth asking why the Bottesford Friendly Society started so early. The reasons are not obvious. It is tempting to suggest that in rural areas the sense of insecurity resulting from the Enclosures spurred working people into clubbing together, but Bottesford was not enclosed until 1771, more than 20 years after its Society started. Of course, agricultural work was always hard and physical, but was this more so in the 1740s than at other times? One suggestion is that the spread of education and collective skills that came with the rise of Methodism about this time may have provided the impetus, but there may be other interpretations.

At any rate, the Society met a real need within the parish, and became popular and well supported. Its longevity also suggests that it achieved a good balance between the level of member’s contributions and the benefits they received, such that it did not go bankrupt. Many such friendly Societies did go under, not least because there was no reliable means of judging what their liabilities would be. There were no actuarial tables for this purpose until some time in the 19th century. If member’s benefit claims exceeded what a Society could provide, then it went bankrupt. When this happened, members not only lost their rights to sickness and death benefits, but they also lost all the contributions they had paid in. Bottesford appears to have avoided falling into this trap, though we do not know how this was achieved. Perhaps the risks of agricultural work, unlike those of mining or factory work, were sufficiently predictable. Perhaps they were just lucky. Alternatively, it may be that the benevolent Duke shored the fund up during periods of widespread illness.

During the Napoleonic Wars, it is reported that many in the ruling class suspected Friendly Societies of being seditious organizations, resisting authority or even bent on republican goals, and wanted to see them repressed. Paradoxically, others took an almost opposite position, seeking to encourage their spread, because they saw Friendly Societies as a means of reducing pauperism and dependence on Poor Law relief, thus reducing the cost of paying the Poor Rate. Neither view prevailed. The Poor Rate continued to be paid after the Poor Law Amendment Act of 1834 (the New Poor Law) had consolidated parish-level responsibilities into the larger units of the Poor Law Unions. The rise of industrial protest and trade unions also proceeded separately from the Friendly Societies, which continued carrying out their work on their own terms but within the legal framework set by Parliament and the Commissioner for Friendly Societies.

Into the 20th Century

It is also worth asking why the Bottesford clubs and societies continued as long as they did, into the 20th Century? In the case of the Cow and Pig Clubs, there was a strong incentive to continue to provide home-grown assurance, as long as there was enough cottagers who continued individually to keep one or two animals for their own benefit. At the other end of the scale, the attraction of savings banks, life insurance and other such schemes is self-evident, so long as unemployment pay and the state pension were (and still are) set at fairly low levels. The case is perhaps harder to make for the Bottesford Friendly Society to keep going into the second half of the 1900s, in that it remained a small society with only limited resources. When finally wound up in 1972 its remaining funds were divided up between the 22 last members.

This account draws on “The friendly Societies in England, 1815-1875” by P.H.J.H. Gosden, published in 1961 by Manchester University Press (and available from Leicestershire County Libraries) – an extensive reading list is given in the project Bookshelf.

We hope that local people with personal knowledge will add to this account and help us to correct its mistakes. Registration as a contributor to this project is simple and free, and you will be able to place your words and pictures on the internet for all to see.