Ladies and children in Chapel Street, Singleton's farmhouse on left 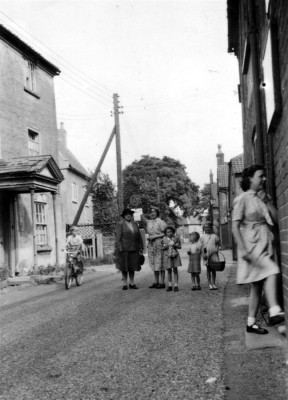 Taken in the years afer the end of the Second World War, this picture shows the old farmhouse known as ‘Singleton’s’, though at this time the occupant was Mrs Lotte Tinckley (nee Singleton). The two ladies in the picture are Mrs Welbourne (left) and Mrs Pearson (later Pat Taylor) on the right. The girl holding the shopping basket is Brenda Sellers (Brenda Turier) and next to her is her brother Richard. The Singleton family ran horse-drawn wagonettes which, among other things, took visitors from the station to view Belvor Castle.