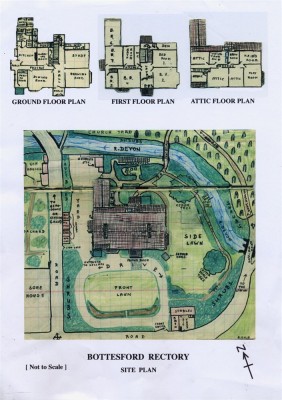 Drawn from memory by Stanley Blackmore in 1943, when he returned to school in Oakham following his first school holiday spent at Bottesford Rectory. It depicts the location of Bottesford Rectory with respect to the River Devon and surrounding village streets, and also its internal layout, as it was when the Blackmore family lived there during and after the Second World War. It is interesting to make comparison with the Rectory and its grounds as they are today, following its redevelopment around 1989 as flats and maisonettes for retired persons.