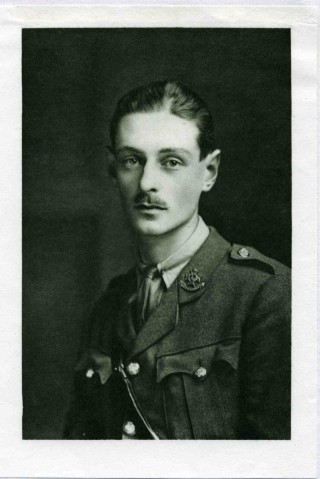 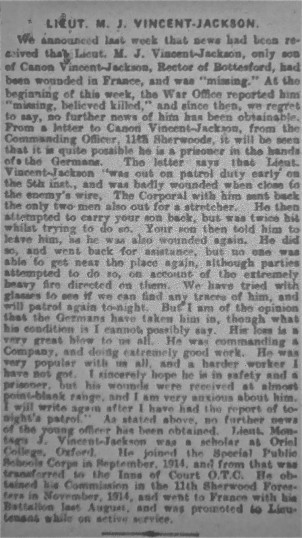 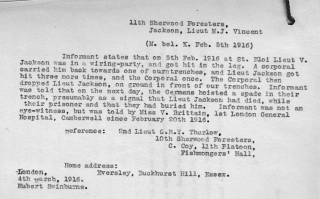 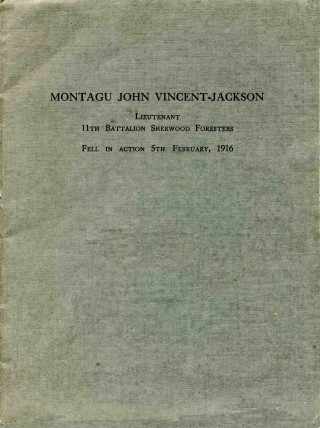 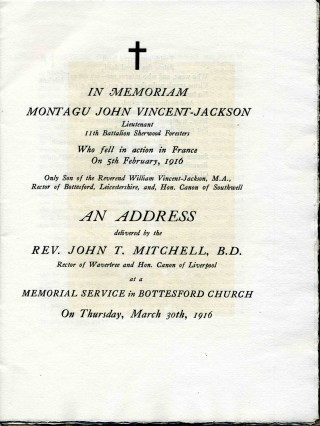 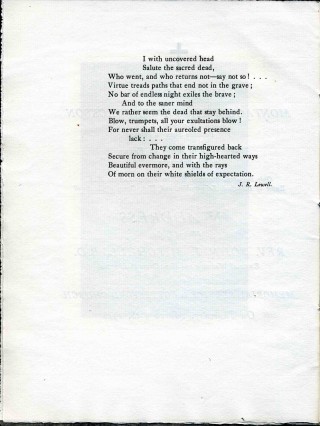 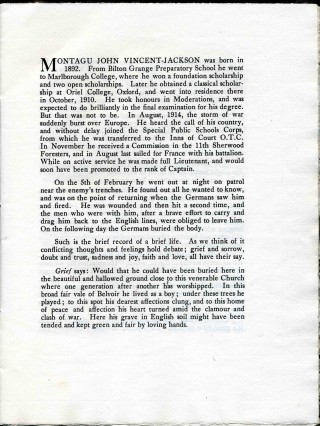 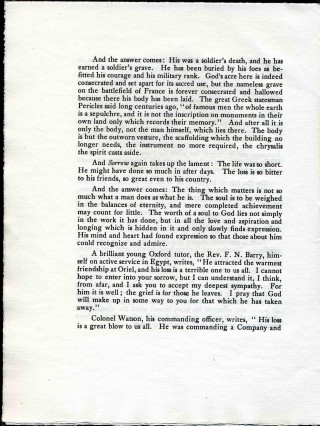 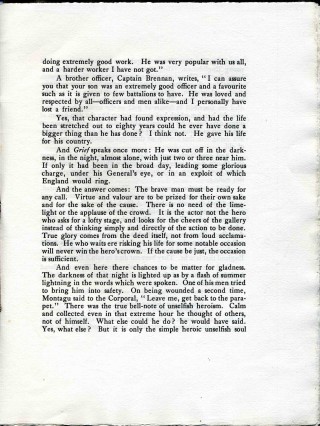 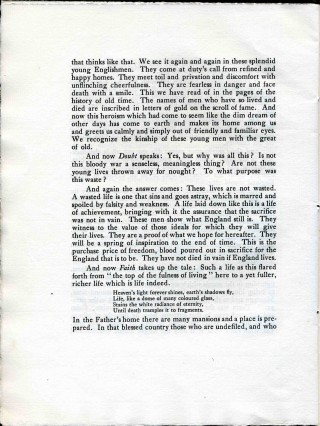 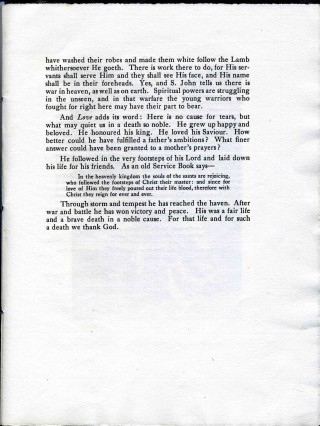 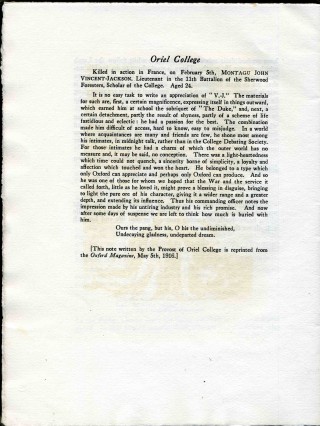 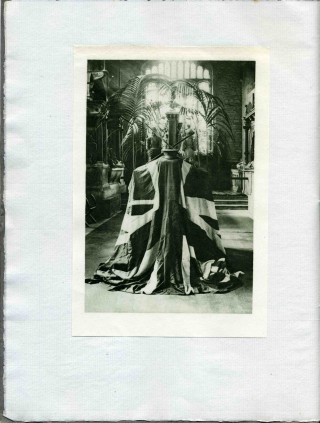 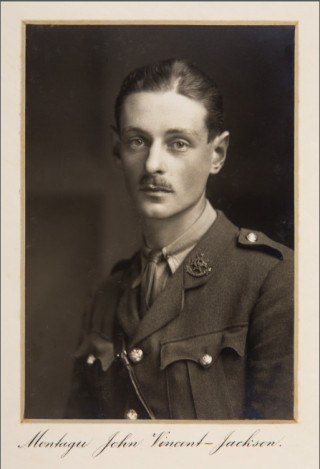 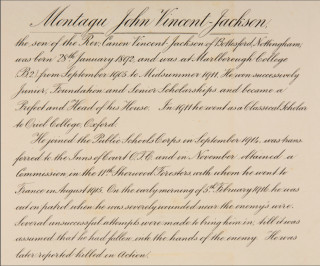 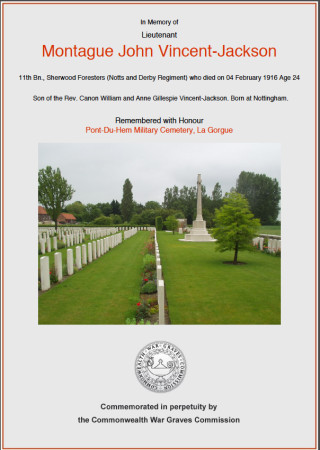 Montagu Vincent-Jackson, the only son of Rev. Canon William (the then Rector of St Mary’s Church, Bottesford) and Anne Gillespie Vincent-Jackson was killed in action on the 4th February 1916.

From Bilton Grange Preparatory School he went to Marlborough College from September 1905 to Midsummer 1911 where he won a Foundation Scholarship, and two open Scholarships. Marlborough College archives record that he was ‘Prefect and Head of House’. In 1911 he won a Classical Scholarship to Oriel College, Oxford where he took Honours in Moderations (twelve three hours examinations over six days forming the first part of a Classics degree).

The declaration of war interrupted his undergraduate studies. In August 1914 he enlisted in the Special Public Schools Corps, later joining the Inns of Court O.T.C. as a Private. He subsequently obtained a commission as a Second-Lieutenant with the 11th Battalion Sherwood Foresters on the 13th November 1914, and served with the Expeditionary Force in France and Flanders from the end of August 1915. Promoted to full Lieutenant he was soon to be made Captain in 1916. Standing 6 foot tall he would have made a commanding figure.

The Parish Magazine for October 1915 edited by Canon Vincent-Jackson carried the following report. Its introduction gave the following details:

The following extracts from letters, dated September 15th and 16th, from a Bottesford man, may be of interest to Bottesford people

It was most likely written by his son Montagu.

‘This is now my third night in the first line, and I am getting almost used to the incessant ping of rifle bullets, and the dull thud of cannon. I wish you could see me now, lying on a wooden bed in my dug out, surrounded everywhere with sandbags, shells and rifle bullets. Night is like daytime here, and all officers are on duty in turn for three hours, which are spent in continually patrolling up and down the trenches to see the sentries are on the alert. Sniping and machine-gun fire goes on all night, mostly directed against working parties, gun-fire is restricted to the daytime. Our right-half battalion was badly targeted during the day, but escaped scot-free. Our company mess-room is a cellar of a house which forms part of our line. It has been much bombarded, and the cellar is the only room with a roof to it, also having no windows, it can show no light at night. Two snipers live in the wooden framework, which is all that remains of the roof, and, as a result it attracts many shots. I had rather a thrilling time last night, when I took out a party to reconnoitre the grass between our trenches and the Germans, who are not more than 75 yards away. We crept out on our hands and knees through a tunnel, and I then spent an hour crawling over masses of barbed wire and rattling tin cans. I came back with my clothes torn and covered in mud, but without being hit. Whenever the Germans send up a flare light, one has to lie flat down and keep still for fear of snipers, and if you happen to be lying on a piece of barbed wire at the time, it is not very comfortable. There were also two unpleasant moments, when I saw a rifle pointed at me from our own trench only 20 yards away, and had to shout to stop him firing: and when I could not find the entrance of the tunnel! I saw a German aeroplane brought down by machine-gun fire three days ago, and there is nearly always an aeroplane being fired at by shrapnel.’ (Extract courtesy of George Waudby)


Such reconnaissance would no doubt become routine rather than a “thrilling” feature of his life as a junior officer. Sadly early in the morning of the 5th February 1916, on night patrol near enemy trenches, he was wounded and then hit a second time. Heavy fire foiled rescue attempts to bring him back to safety. He was officially assumed to have been killed on or about that date.

His Colonel wrote, ‘his loss is a very great blow to us all: he was commanding a Company and doing extremely good work. He was very popular with us all, and a harder worker I had not got. A brother officer wrote, I can assure you that your son was an extremely good officer, and a favourite such as it is given to few Battalions to have. He was loved and respected by all, officers and men alike, and I personally have lost a friend.’

His records show that his father made enquiries about the possibility that he might have been taken prisoner. Detailed casualty reports and eye witness Red Cross statements revealed that this was not the case.  In March 1916 one of these witness statements was a report from 2nd Lieut G.R.Y. Thurlow (10th Sherwood Foresters) giving information recorded from a nurse working at the 1st London General Hospital – a ‘Miss V Brittain’. An Oxford undergraduate herself, who had also given up her studies to nurse the wounded, Vera Brittain, the mother of Shirley Williams (The Rt Hon. the Baroness Williams of Crosby),  would become a prominent post war intellectual, peace activist and novelist. Geoffrey Thurlow, also a former Oxford undergraduate, was a close friend of Montagu Vincent Jackson and Vera Brittain’s brother Edward. Edward Brittain was posted to the 11th Sherwood Foresters a week after Montagu’s death. The collected correspondence of Vera Brittain includes a letter from her brother dated the 16th February 1916, relaying details he had recently heard about the circumstances of Montagu’s death. (see Alan Bishop and Mark Bostridge 1998 edited volume ‘Letters from a Lost Generation’, page 230). These are the details that Geoffery Thurlow reported to the Red Cross on the 4th March 1916. He wrote them from hospital in London where he was recovering from injury and shock sustained shortly after the date of Edward’s posting to France. Vera Brittain wrote to Edward on the 27th February including details of a visit she had made to see Geoffrey Thurlow at the Fishmongers’ Hall Hospital, London Bridge.

The Red Cross witness statements also reveal that it was a name sake, Drummer Albert Jackson who attempted to rescue his Officer, Montagu Vincent-Jackson. He received the Military Medal in recognition of his bravery. (Please see comment below from Ken Atkinson, Albert Jackson’s grandson).

On Feb. 5th as I and two others were going out bomb-throwing at 2.30 a.m. we had to wait for news of Lieut M.J.V Jackson and also of L/Cpl Hinnett and Drummer Jackson, who were on patrol duty, between the lines. At about 10 to 3 o’clock, the Germans started rapid fire, we knew they had been seen. In the course  of 15 minutes, Drummer Jackson came in safe, bringing with him L/Cpl Hinnett, who was wounded, and stated that Lieut. Jackson was wounded in the thick part of his body and chest and that he was dead. Drummer Jackson had dragged Lt. Jackson 60 yards from the German barbed wire.

He is buried at Pont-du-Hem Military Cemetery, La Gorgue, France.

His parents died soon after his loss. His mother in 1916  and his father in 1919. Sadly they would never receive a letter dated 4.10.1919 written to the ‘Sherwood Forresters’ (sic) by 1st Lieutenant Karl Brand resident of Siegenburg, Lower Bavaria.

In the night of the 4th or 5th of Feb 1916 about 3.30 a.m. an English patrol was discovered in the region of – La Maisnil Tronulles – France by a detachment of the 20th Bavarian Imperial Infantry Regiment. There was heavy firing, with the result that the leader of  the patrol,

fell dead in to the hands of the Germans, I beg for the address of Lieut: Jackson’s parents or relatives, as I am in a position to give them information about the hero’s death of their son, and consider myself bound to send them his watch which was hit by a bullet.

(* 11 could have been recorded as 2, explaining the wrong Battalion details in this transcribed letter.)

This order of service was kindly loaned by Mr Bernard Johnson of Orston. He believes one of his relatives from Orston attended the memorial service held for Lieutenant Montagu Vincent-Jackson on 30th March 1916.

The address given by the Rev. John T. Mitchell is printed in full. It speaks to sentiments of a time in World War 1 before the battles of the Somme and Ypres.