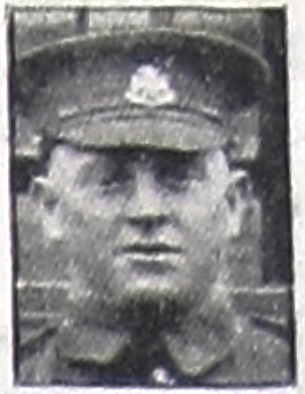 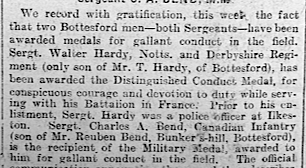 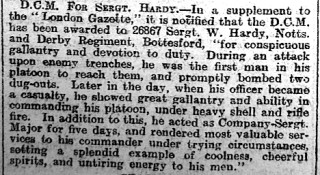 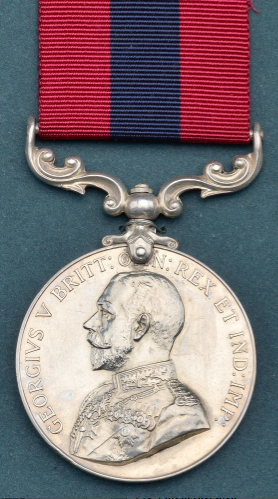 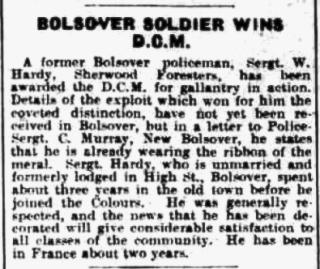 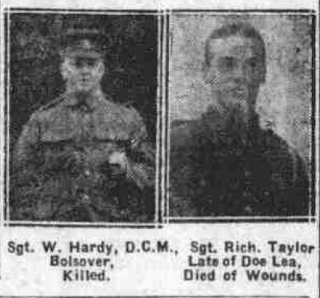 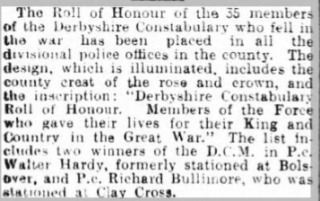 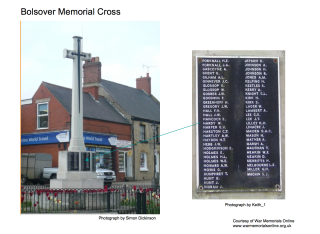 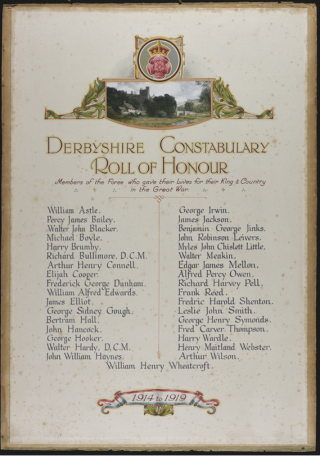 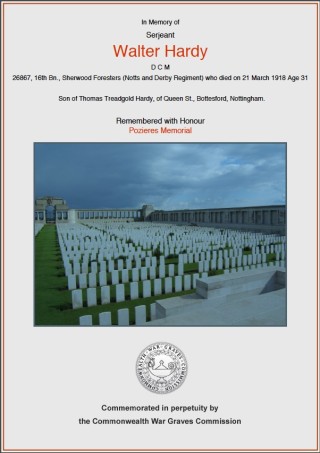 Walter Hardy was born in Bottesford in 1888 the only son of Thomas and Sarah Hardy. The Hardy family lived on Queen Street near to the Bottesford Police Station.

His grandfather was the Parish Clerk and longtime Sexton in addition to the Keeper of the Coffee House Tavern on Market Street. Walter was eight years old when tragedy struck the family in the summer of 1896. Both his mother and younger sister sadly died. Walter and his father, who worked as a horseman on a local farm, continued to live in Queen Street in Bottesford.

Walter still lived with his father on Queen Street according to the census of 1901. Age thirteen he would have left School by then. It could be that living close by the local police station brought him into regular contact with police officers. This may have influenced his future career choice. The Rev. W. Vincent-Jackson is listed on his police record as recommending him for police service. Prior to joining the Derbyshire Constabulary, at 21 years of age, on the 16th July 1908, he worked as a waggoner. By the time of his enlistment in Chesterfield on the 28th February 1915 he had served at nearly six years in the Derbyshire Constabulary, latterly at Bolsover as a Sergeant. Unmarried he lived in lodgings on High Street, Bolsover. We do not know what led Walter to move to Derbyshire and subsequent service as a police officer. It is to his credit that given what must have been difficult home circumstances in his childhood that he succeeded in his pre-war police career, receiving commendations for his service in 1912 capturing bicycle thieves in Chaddesden. On being awarded a Distinguished Conduct Medal for ‘gallantry’ in September 1917 the Belper News noted that

‘Sergt. W. Hardy (…) was generally respected, and the news that he has been decorated will bring considerable satisfaction to all class of the community.’

On enlistment Walter was 27 years old, older and more experienced than many volunteers. He would have cut a commanding figure at 5 feet 10 1/2 inches, much taller than the average recruit at that time. On the 16th June he was posted to Chesterfield to join the newly formed Chatsworth Rifles (16th Battalion, Sherwood Foresters, Notts., & Derby Regiment). Many Derbyshire miners volunteered to serve with 16th Battalion in addition to a number of police officers. Many of those former police officers would go onto to become NCOs as did Walter Hardy.

Ten months of training at various camps (Redmires near Sheffield; Hursley Park near Winchester; Aldershot and finally Witley Park, Surrey) forged recruits to the 16th Battalion into a military unit. Even during training Walter Hardy’s capability was recognised. Within 6 weeks of posting on the 7th July he was promoted to Lance Corporal and to full Corporal on the 2nd September 1915.

The 16th Battalion sailed on the 6th March 1916 from Southampton to Le Havre and thence to Flanders and the Lys Valley near Estaire. Although lacking front line experience Brigadier General P.W. Robertson, Commanding Officer of the 19th Brigade, was complimentary about their potential. His inspection report for the 10th April 1916 noted:

‘Officers.      A good keen lot (…)
NCO’s.        A far better stamp than most of the New Army Battalions
Men.        A very tough lot. Good physique generally.
They seem to have a good system of work and organisation and only require further experience’

Even before the Battalion’s deployment into front line action Walter Hardy was further promoted to Sergeant on the 15th May 1916. In a very short time the Battalion would gain front line experience. First at Festubert and then in earnest at Givenchy where they suffered considerable casualties.

Walter Hardy then saw action in 1916 during the Battles of the Somme. In 1917 the 16th Battalion fought as part of the 17th Brigade in the Third Battles of Ypres.

On the 13th August 1917 the 16th Battalion relieved the 21st Battalion King’s Royal Rifle Corp in the front line at Klein Zillebeke, Flanders. A line that had been achieved as a consequence of the Battle of Pilcken Ridge earlier in the month. Friday 14th August was a quiet day. However, the next day, ‘D’ Company, to which Walter Hardy was attached, ‘was raided by the enemy’ The Battalion War Diary gives the following details of that raid:

‘The enemy advanced in two waves at 20 paces distance through a hedge which runs 40 yards in front of and parallel to the front line. The attack was preceded by a light barrage of Rifle Grenades and Light Trench Mortars, which fell South of the point selected for entry. It is thought that the enemy was of the opinion that we did not occupy the point chosen for attack.

The raiding party advanced shouting and throwing bombs, but on coming through the hedge, met with steady fire from Rifles and Lewis Guns from the garrison and No 16 Platoon. 2nd Lieut. A.S. Mellor and his orderly went out along a Sap on the flank of the raiding party and bombed them with German Grenades which had been left in their captured dugouts by their previous occupants. 2nd Lieut. Mellor was wounded whilst doing this.’

It seems highly likely that this describes the action in which Walter Hardy earned a Distinguished Conduct Medal. The London Gazette citation for the 26th January 1918 (p. 1309) reads:

‘For conspicuous gallantry and devotion to duty. During an attack upon enemy trenches, he was the first man in his platoon to reach them, and promptly bombed two dug-outs. Later in the day, when his officer became a casualty, he showed great gallantry and ability in commanding his platoon under heavy shell fire and rifle fire. In addition to this, he acted as Company Sergeant Major for five days and rendered most valuable service to his commander under trying circumstances setting a splendid example of coolness, cheerful spirits and untiring energy to his men.’

Those actions were of such note that the Commanding Officer, Lieutenant – Colonel C. Herbert-Stepney made his way to the front line to convey the Divisional Commander’s congratulations for the way ‘D’ Company had broken the enemy raid. He did not succeed and sustained a severe bullet wound from sniper fire to his left arm. He survived but lost his arm. The Battalion was deprived of its original and much respected Commanding Officer. ‘Trying circumstances’  indeed given the demanding sector of the line occupied by the Battalion at that time. Major N. Houghton assumed command. Walter Hardy clearly impressed his new commanding officer and was awarded his medal ribbon on the 9th September by the Divisional Commander before an en masse Brigade parade.

Tragically Major Houghton’s command would only last three weeks. On the 13th September he and one of Walter Hardy’s fellow sergeants, Sgt. Pepper, were killed by a shell just outside the Battalion Head Quarters. The Battalion suffered a high rate of casualties during the the final stages of the 3rd Battles of Ypres which culminated in the action to take the Passchendaele Ridge in November 1917. Walter Hardy survived the privations and rigours of action in this sector. Many in the Battalion did not.

By Christmas the Battalion was withdrawn from the front line for refitting and training. Walter Hardy’s ‘D’ Company was at Verval, west of Boulogne. At 6.00 pm on the 25th December ‘senior NCOs and Warrant officers had their Xmas Dinner in the Village School Hall’.

The New Year brought little further relief for the 16th Battalion. They were posted back to front duty in the Ypres Salient into what was descibed as ‘a dreary waste of debris and devastation’. This final tour of duty in the Salient was ‘very unpleasant’, according to Roy Francis Truscott’s ‘A Short History of the 16th Battalion, The Sherwood Foresters, Chatsworth Rifles’  published in 1928. Yet more casualties were sustained. Again Walter Hardy survived and was granted two weeks home leave on the 30th January 1918.

We do not know where he spent that time. Perhaps he made it back to Bottesford to see his father and to Bolsover to share his experience with former colleagues in the Police Force. During his absence, on the 8th February the 16th Battalion, The Sherwood Foresters, was disbanded and amalgamated with the 17th Battalion as part of an Army wide initiative to reduce each brigade from four to three battalions. Walter Hardy returned to duty in that reorganised unit on the 13th February 1918 and thence on the 28th February to Dessart Wood Camp on the Somme for what would be the final three weeks of his life.

On the 21st March at 4.30 am., after an extended period of training and sporting competitions, the camp was shelled with high explosives and gas. The ferocity, of what became known as the German Spring Offensive, resulted in a staged retreat across the whole Western Front. Sgt. Walter Hardy, age 31, may well have been one of twenty three men who succumbed to gas attack during the 16th Battalion’s struggle to retreat in an orderly manner.

‘We started from the camp at 7.00 am. (…) we struggled wearing our gas-masks, but even so even so suffered over gas twenty casualties, while more were seized with sickness. It was soon found impossible to group our way across country with this handicap to visibility in addition to the mist itself, and a certain number of officers had to remove their masks and guide footsteps by flash guns with the nose clip and mouth piece as their only protection.’ (Truscott op cit. p. 178).

Or he may have survived the initial gas attack and been killed in the continuing enemy barrage. Through out the day the high explosive shelling continued until they finally dug in at 10.00 pm. to await the next day’s violence from the superior numbers of opposing forces. The next ten days of retreat was at a cost of 321 casualties from the 16th Battalion. Walter Hardy’s body was never identified for burial. His name is inscribed on the Pozieres Memorial.

The Battalion to which he had showed such devotion returned for one last tour of front line duty in the Ypres Salient on the Wytschaete Ridge. 461 officers men remained of the 16th Battalion as ‘A’ and ‘B’ Company in a new composite battalion. Over the ten days from the 15th to the 25th April 1918 they experienced some of their ‘hardest fighting in the whole war’ and were reduced to a final strength of just 189 men (Truscott, op cit. p. 202). They were then withdrawn from front line duties to become a training ‘cadre’ initially for newly arrived American forces on the Western Front.

Walter Hardy's name was also included on the Derbyshire Constabulary's Roll of Honour commemorating those police officers lost in the Great War. Copies of Roll were originally displayed in all Police Divisional Headquarters throughout the county. Unfortunately none of these remain on public display.
Served in
Sherwood Foresters (19)