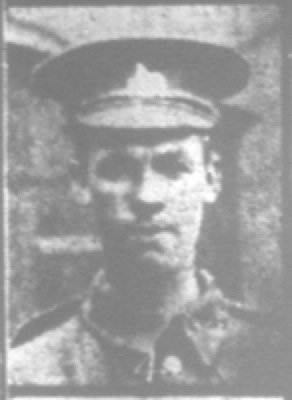 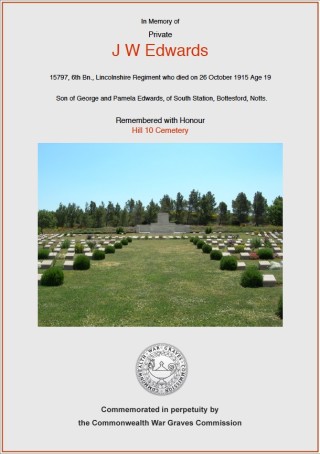 Joseph William Edwards was born in 1895 in Stowe by Chartley Staffs.

By 1911 George Edwards worked as a railway signalman in Bottesford and lived at 1 South Station Cottages, Bottesford with his family. The family, as well as Joseph, included Edith (18), George (14), Harold (9), Olive (7) and William Edwards (76) who was a visitor recorded in the 1911 Census. Also by then Joseph aged 16,  was working on a farm.

He enlisted in early 1915 at Mansfield as a private in the 3rd Training  Battalion, Lincolnshire Regiment, Service Number was 15797 and was transferred to the 6th Battalion and posted to the Dardenelles in August 1915.

C.R. Simpson gives the following account of the 6th Battalions service in the the Dardenelles in his book on ‘The History of th Lincolnshire Regiment 1914-1918 published in 1931.

The 6th (Service) Battalion of the Lincolnshire Regiment with the 6th Border Regiment, 7th South Staffordshire Regiment and 9th Sherwood Foresters, formed the 33rd Infantry Brigade which was raised at Grantham in August I g 14 and remained encamped’ there until early in April I9I 5. On the 4th of that month the 11 th Division moved to the Rugby area, thence to Whitley and Farnham, the 33rd Brigade taking over a tented cam at Frensham. Here, until the end of June, the brigade on the 1st July the brigade sailed from Liverpool, escorted by two destroyers as far as the’ Scilly Islands; but there was no escort to Alexandria or Mudros.

The “ Empress of Britain, ” carrying the 3rd Brigade, reached Alexandria on the 12th July, where it was delayed four days to fill up with water, arriving at Mudros on the I8th. The troops were transferred to small steamers there, and carried to the southern end of Cape Helles, where they moved into trawlers for landing on the peninsula.

The 6th Battalion landed at Suvla Bay on the night of the 6/7th August 1915. The conditions were dire.

They became inured to the hard conditions of the firing line and acquired self confidence. But the incredible filth, stench and flies all over the lines sowed the seeds of dysentery, from which the brigade never entirely recovered, It was no fault of our men who, when not in the trenches, had to bury innumerable dead, fill up latrines, burn rubbish and clear up all round.

The Division was informed that it would shortly take part in a landing at Suvla Bay in conjunction with an attack from Anzac, push on to the eastern crest of the Gallipoli Peninsula, and so cut off the Turks opposed to the British and French troops operating from the south.

The landing took place on the night of 6th/7th August. (…)  Beyond a few shots from Turkish. snipers, the landing was effected without opposition.

The 6th Battalion having dug in then waited in reserve until 2.00 pm. when given the order to advance on a hill position known as ‘Chocolate Hill’ (aka Hill 53). Although coming under heavy fire they were successful in their assault. The final advance to the hill position was across a dried salt lake. The young soldiers of the 6th Lincolnshire were formed to advance in extended order in absolute parade -ground formation, much to the admiration of onlooking commanders in the Australian Forces. Such order did not hold in their charge on the trenches and redoubts at the summit of the hill. It might have been as part of this action that Joseph Edwards was injured. They suffered 90 casualties killed and or injured.

On the early morning of the 9th August they were to advance on another hill position (Hill 70 or Scimitar Hill) to the North East of Chocolate Hill. They took terrible casualties from intensive fire and burning scrub land. Only 5 officers and 174 men survived out of 17 officers and 561 men who had started out. If Joseph had indeed survived the first assault on Chocolate Hill he could well have sustained his injuries in the second. The Battalion was withdrawn on the 12th August until the 20th/21st August.

The now depleted Battalion was formed into two companies for yet another assault on a heavily defended Scimitar Hill. They came under sustained shell fire which caused yet more bush fires. They never made the hill sustaining yet more casualties in the 21st/22nd August – 4 men killed, 22 wounded and six missing. Any soldier from the battalion ‘lucky’ enough to have made it to the 22nd August would now face weeks of sniping and bombing, dysentery and scarcity of food and water.

The flies were intolerable, and it became quite an art to swallow a mouthful without swallowing at least six flies at the same time, The stench of the dead, many unburied, was quite nauseating and always prevalent. The one saving grace was the sea bathing, which was not interfered with by the Turks. (C.R. Simpson, p. 155)

Notwithstanding these appalling conditions it was reported that the ‘spirit of the men remained unbroken’.

The remnants of Joseph’s Battalion were evacuated from Sulva Bay on the night of the 20th/21st December 1915. Joseph Edwards was not among them. We do not know when exactly he sustained his injuries. All we know is that he sadly succumbed to them on 26th October 1915 age just 19 years and was buried in Hill 10 Cemetery in Turkey.

He was the son of George and Pamela Edwards.
Served in
Lincolnshire Regiment (15)