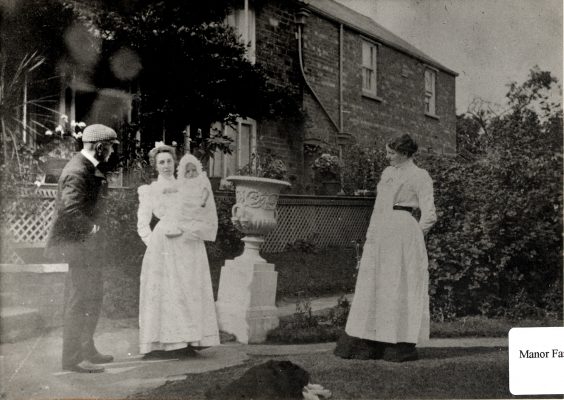 The man on the left is identified as Bennie Rooth: the identities of the two ladies and the child are not recorded on Dennis Kirk’s album picture.

Ben John Rooth, born 1874 in Plungar, married Dora Anne Hopkinson from Arnold, Notts, at Plungar church, on the 22nd October 1901, when he was 27 and she was 21. On 10th September 1902, their son, also named Ben John, was born, and was baptised on the 5th October 1902. It is most likely that this picture shows the proud father, Dora Ann (on the right) and Ben’s widowed mother,, Mary E. Rooth, holding her new grandson, wearing his baptism robes. Mary Rooth was recorded as a 49 year old farmer, originally from Mansfield, Notts.

The family moved to Waltham on the Wolds, where the census of 1911 shows that Ben innkeeper and farmer, from Stretton in Derbyshire, lived with his wife Dora, and their two children Ben John junior and Dora Mary born in 1905.

They were relatively well off. The census shows that in 1911 they were able to employ a nurse, a domestic servant and a groom.