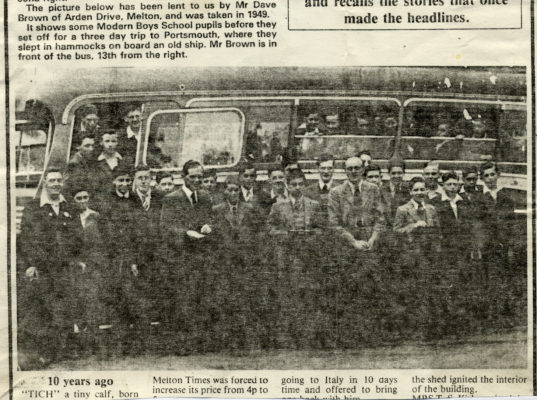 This rather poorly reproduced picture from the Melton Times shows a large group of Bottesford and Melton Schoolboys ready to depart on a coach trip to Portsmouth. The date was probably around 1950.

The caption tells us that the teachers seen at the front were Harry Hunt from Bottesford school and Mr Greenslade from Melton. The bus driver was named Topliss. Eight Bottesford boys on the trip are named: D. Bell, G. Bolland, P. Sutton (presumably Chip), B. Silverwood, J. Weatherall, M. Marshall, P. Olley and J. Gilbert.

The boys slept on board the “Victory & Albert ship”.