You are here: Home>People>Village families>Calcraft Family at Home and Abroad>Alfred Calcraft b1884 Hull and his father Thomas Calcraft b1853 Muston 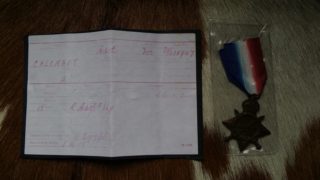 Updated November 2020: The contact from grandson Adam Calcraft (see Comments below) prompted new research about Alfred Calcraft and his father Thomas and several new facts have been added to expand the original 2017 article.

A Thomas Calcraft was born in Muston in 1853, being a brother to the Joseph Calcraft who stayed farming at Muston and whose sons emigrated to Canada. By contrast, Thomas’ sons would be Yorkshiremen rather than Canadian.

The 1861 census shows Thomas as a scholar so he would have attended Muston school. In 1871 Thomas had moved away from the family farm and enlisted with the Royal Regiment of Horse Guards in their Regents Park barracks in London – the regiment is also known as the Blues and Royals. Thomas had regimental number 548 and was recorded at the barracks building in Albany Street. He had signed up for 12 years’ service.

He was with the regiment, still with the rank of Private, in 1881 when he was based at their Hyde Park barracks. He hadn’t had an entirely smooth ride though, as in 1879 he had twice been court martialed for desertion. The first time was caused by an absence without permission over Christmas and New Year 1878/9, and was heard at the regiment’s Windsor garrison on 13 January 1879 when he was found guilty and imprisoned for 28 days with hard labour.

The second court martial was held at Windsor in early March, so he must have gone AWOL again almost as soon as he was released after the first event. He had been caught by police in Bedford and held in the gaol there until the military authorities fetched him back to barracks. Had he been heading from Windsor to his family in Muston? Or perhaps to a destination further north? Unfortunately the second page of the Court Martial chit does not appear, so the full description with the dates of the second offence are missing, but we do see that he was given 35 days imprisonment with hard labour.

Thomas Calcraft was in the regiment for two more years, the discharge ledger showing that he completed his 12 years and left on the 17 May 1881. He had not received any merit stripes but notably, given the unfortunate court-martial incidents, was said to have given long service and generally good conduct.

By 1882 he had quit soldiering and moved north, working as a coachman in Hull when he married Jane Cundill (nee Brown), a young widow who already had four children. The couple went on to have another four in the Myton district of Hull, their names being Thomas born in October 1882, Alfred in 1884, Minnie in 1888 and Edward in 1890. His wife Jane died in 1893 and Thomas remarried in 1895 to Elizabeth Chadwick (nee Nutbrown), another widow, though there may not have been a wedding ceremony as the only indication found so far is the 1901 and 1911 censuses.

Elizabeth was from the Bridlington area. She had previously married a John Chadwick in 1873 and born ten children with him before he had died in 1894. She and Thomas Calcraft originally lived at 24 Brook Street, Scarborough, with Elizabeth working as a charwoman. Thomas’ daughter Minnie and Elizabeth’s children Jane Elizabeth and Herbert also lived there, all with the Calcraft surname in the 1901 census.

For many years Thomas worked as a groom and coach driver in Scarborough, gaining a reputation for speed. Apparently when he was a coach driver he would drive the carriage between Scarborough and Whitby with more horses, going faster, and was known within his family as the maverick “mad Tom”. His employers must have rated him, though, as he was given a long service present. By 1911 they lived in Rose Cottage, Cloughton, a small village just north of Scarborough. Thomas died in 1925 and Elizabeth in 1932.

Thomas Calcraft’s son Alfred initially worked as a farm servant in Seamer in Yorkshire and married Ethel Farmeary on Boxing Day 1905 in York. By 1911 they had two children and Alfred was a groom in the employ of a Mr Ellis. He also worked as a charabanc driver for the Balmoral Hotel in Scarborough where he gained excellent references.

When the war started in 1914 he enlisted early, joining the Army Service Corps as a driver on the 12 November at the age of 29 and being given the service number T3-025947. After training Alfred embarked with the British Expeditionary Force in March 1915 for Campanelles, went on to Alexandria and by 1916 was on operations in Salonica. He was back in England in 1917, spending time in York Hospital being treated for scabies. After recovering, he returned to Salonica in August that year and remained there for the rest of the War.

By the time of the Armistice the Russian Revolution had been underway for over a year and other European governments sought to protect their commercial and political interests by supporting the anti-revolutionary White Russian movements against the socialist Bolsheviks. Alfred was one of the men in the Salonika Army who formed the Army of the Black Sea, which the British Government (and allies) sent to both support the White Russians and to manage the occupation of Constantinople. A couple of other records show that he spent time in Georgia, with a line dated 4 January 1919 seeming to mention Batum (now the city of Batumi) and a page definitely showing he had a medical at Tiflis (a.k.a. Tbilisi) on 29 May 1919.

One of the pages in his service record shows Alfred being sent back to the UK on HMT Huntspill on 18 June 1919 from Chanak (i.e. Canakkale in the Dardanelles in Turkey) via Taranto (Italy) for Demobilisation. The order is signed by a Captain in the British Army of the Black Sea. Arriving at Woolwich on 2 July 1919 he travelled to Ripon where his demobilisation ID papers were signed the next day. His transfer to the reserves was stamped at Woolwich on 31 July 1919 and Alfred was subsequently awarded the 1914-15 Star and the War Medal (see picture). He died in Scarborough in 1947 and his widow Ethel lived there until her death in 1970.

Sources useful to this article include: