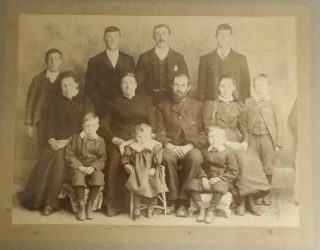 Joseph and Ann Calcraft's family circa 1899.
Courtesy of Ruby, Shirley and Michael Calcraft

This photograph shows the family of Joseph Calcraft and Ann Elizabeth Parnham. Joseph was a great, great grandson of William Calcraft who lived in Muston around 1740.

The picture looks to be taken around 1899 or 1900, not long before Tom started out for Canada, to be followed by several of his brothers.