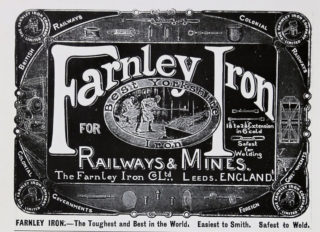 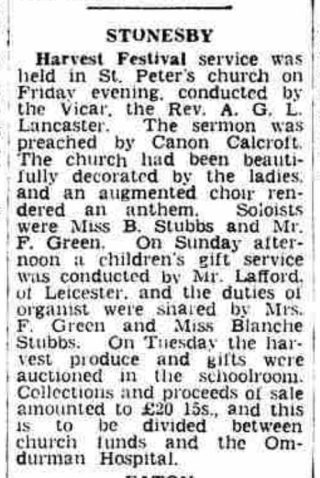 The seventh of William and Mary Calcraft’s eight children was Edward, born at Muston in 1862. After growing up on his father’s farm Edward became an indoor servant for the family of Thomas Mansell in Woolsthorpe. By 1891, as many young men in the Vale of Belvoir did at that time, Edward had joined the Great Eastern Railway and was serving as a porter at the station in Kingston Upon Hull. He met and married Hannah Ireland, a widow with three young daughters who was five years older than Edward, and they had just one additional child, their son George who was born in Hull on the 20 October 1893.

His father’s work as a railway porter would have given George a stable though simple upbringing, living in the Myton area of central Hull, close to the station. He took an interest in the local church from an early age, perhaps under his mother’s influence, and attended school at St Luke’s. George joined a Bible Reading group at Holy Trinity Church and was a chorister at St John’s Church.

He gained a place at St Johns College, Durham University to study theology but his learning was interrupted by the Great War. George Calcraft volunteered and joined the Royal Army Medical Corps as a cadet, though his records have not survived. However, the London Gazette reported that at the end of the War he was commissioned into the East Yorkshire Regiment as a 2nd Lieutenant. George returned to Durham and gained his degree in 1922. He was appointed that year to be the curate at St Lawrence Church, Kirkdale, Liverpool. There he met Edith Sanders who was from nearby West Derby and completing her own education at Morecambe Central College. Once she graduated they married in September 1924.

The following year George was able to return to Yorkshire when the Bishop of Leeds offered him the position of Chaplain to the Farnley Ironworks, located at New Farnley, between Bradford and Leeds. The factory had been established in 1844 and produced bricks as well as iron and steel components for railways. By a long-standing agreement, the Chaplain rendered valuable assistance to the work of the surrounding parish of Farnley by also acting as Curate for the church of St James, New Farnley.

The iron works was taken over by Brown Bayley Steelworks around 1927 and this may have been the catalyst for George Calcraft moving to accept the living of St Michael’s parish in Bradford, announced in the Yorkshire Post on the 27 February 1928.

In the early 1930s the Calcrafts returned to Liverpool for a while, living on Brodie Avenue in the Mossley Hill area whilst they trained to become missionaries. They were assigned to work in British East Africa and on the 16 September 1933 set sail on the SS Ussukuma from Southampton bound for Mombasa in Kenya. From there they made their way 700 miles north-west to Kampala in Uganda.

George Calcraft had been assigned to the Diocese of Namirembe by the Church Missionary Society and would be based at St Paul’s Cathedral, the oldest Anglican church in Uganda. Missionaries had been working in the region since 1877 when they were invited by King Muteesa II of Buganda to preach the gospel to his countrymen.

Although he had lived his life in Hull, Liverpool and Leeds, George was still aware of his family ties in Muston and Bottesford and during his first assignment in Kampala he worked with the Wright family to maintain links to the Bottesford Young People’s Union. In 1935, for example, the Grantham Journal reported on fund-raising activities by the YPU to support the use of a cot at the Mengo Hospital. The hospital sits alongside the Namirembe cathedral and was established by Albert Ruskin Cook in 1897.

On the 8 June 1938 George Calcraft was accepted as a member of the International African Institute, one of four new Ugandan-based members that year. George’s service in Uganda would eventually see him rise to the position of Archdeacon in the Anglican Church. In July 1938 he and Edith paid a visit back to their old parish in Bradford and George gave a speech to the annual garden party of the Bradford Missionary Society at Horton Hall to explain the work underway in Africa.

In September 1946, George and Edith travelled to Durban in South Africa, from where they sailed on the HMT Winchester Castle to Southampton to take up what they thought would be permanent residence back home in England. They moved into 1 Cairnmore Road, Liverpool 18, the Sanders family home then occupied by Edith’s spinster sister Mary. After a while, however, they returned to Uganda and George served the church there through to 1955. In 1951 they are recorded taking a short trip back to England on the SS Durban Castle, arriving in London on the 20 August and going back to stay at Cairnmore Road during their visit.

When they sailed from Mombasa to London in September 1955 on the MV Warwick Castle it would be to retire from missionary work and settle on a permanent basis. They initially stayed in London care of Barclays Bank, Gracechurch Street whilst they decided on where to live, and their choice was eventually 17 Grange Avenue in Kirby Muxloe, Leicestershire, with George given the title of Reverend Canon Calcraft. In his final years he would provide support to selected parishes in the Diocese of Leicester, for example as a guest preacher at the Harvest Festival in Stonesby near Waltham on the Wolds, as reported in the Grantham Journal of the 18 October 1957.

George Calcraft died on the 25 October 1962 at Kirby Muxloe and his wife Edith died in a Syston nursing home in 1983.