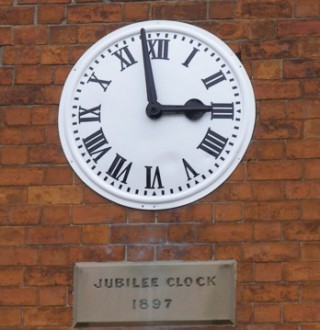 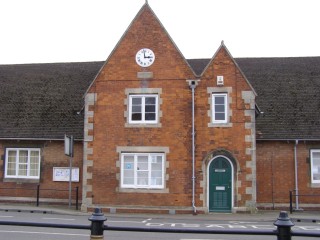 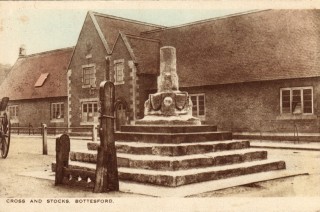 Bottesford school, viewed from the Cross and Stocks

In September, 1896, Queen Victoria passed George the Third as the country’s longest-reigning monarch. The Queen requested that all special public celebrations of the event were to be delayed until the following year, and marked as the Queen’s Diamond Jubilee.

Bottesford set up a Diamond Jubilee Committee and this met in the school room on May 19th, 1897, with Mr F.W. Robinson taking the chair. Twenty three villagers are recorded as being present and to get things started Mr Hickson proposed “that a treat be decided upon tonight“. He also offered that his wife “would provide tea for children up to 12 or 14 years of age“. The meeting minutes record that “this generous offer was gladly accepted“. Those present at the meeting, according to the notes made at the time, were: “Mr F W Robinson (in the chair), Messrs. W Page, J Wright, J Leatherland, W Norris, S King, H Sills, F James, S Baker, ? Land, R J Marriott, A Hickson, C Hickson, G Williams, W Ravell, J H Glover, J Challands, W Bend, J Baines, V Collett, J Winn, D Daybell, Mrs Howercroft.“

The second proposal shows the priorities for such events of the time; it was proposed that “a dinner be provided for men” and went on to specify that it should be “with beer“! This, remember, was in the days before equality of the sexes, though it was also the year in which the National Union of Women’s Suffrage was formed, the forerunner of the suffragettes, and the passing in 1918 of the Representation of the People Act.

But that was all in the future and Bottesford women were to be treated differently and to have a “good cake tea…with meat, if funds would allow“.

Entertainment on the day was to be provided by the village band “if terms were suitable“. Subsequently there is a note agreeing that the Bottesford Band be paid £2.10 shillings for their services, so presumably these were thought to be the suitable terms referred to.

To round the day off there were to be sports and a bonfire, the meeting decided.

The next meeting was also held in the School room on June 2nd and this was “The sub committee for victualling“.The minutes for this meeting record that three rounds of beef had been ordered for pickling, with three village ladies being responsible for one each. The minutes quaintly state that each of Mrs Charlesworth, Mrs Norris and Mrs James should each “take charge of one“.

The beef contract was to be shared around village traders and was to be ordered from Messrs Taylor, Robinson and Duffield(?).

And to make sure that everyone knew exactly what was going on Dr Glover proposed and Mr Norris seconded that “orders to shopkeepers be in writing“.

It was also decided that “people (were) to bring their own plates, knives, forks and mugs“.

Everyone would surely have known what was happening and been caught up in the celebrations, but, just to make sure the committee decided that the crier was to go around and announce the events. The final note on the minutes states that “Mr Hickson to see to the beer supply“. Let’s hope he was up to the responsibility.

A separate minute for a meeting to “decide a form of commemoration of the Diamond Jubilee“, unfortunately undated, but after the 1897 event itself agreed to the proposal from Canon Jackson that “some memorial to celebrate this unique event should be made“.

There were three suggestions. Firstly Mr W Norris proposed a clock should be provided in the gable end of the school. Mr Wright proposed a beech tree at Lynes Corner and Messrs Hoe and Chester jointly proposed a treat for children.

Some sort of compromise was suggested, that being that if funds were sufficient there should be a form of permanent memorial, with a treat for children if possible.

It was agreed that a subscription be opened to fund the project.

Mr Daniel Daybell proposed “that a committee be formed for the purpose of collecting subscriptions and otherwise carrying out the work of the celebrations“. The record goes on to say that this was agreed.

The following wording was also agreed to send to the Duke of Rutland to solicit a subscription:

“I am requested by the Jubilee Committee to write and ask you if your grace will be good enough to give us a subscription. Our list is open either for donations for a permanent memorial or a treat. The permanent is to be a clock fixed on the school. The treat will be a dinner for all over 14 years. A meat tea for all women, then sports etc.“

Presumably this all went ahead since the final note on the minute says that “children will meet the following day at 3 o’clock“.

We also know that funds were sufficient for a clock, since it is still in place.