You are here: Home>Places>Landmarks>The Market Cross at Bottesford

The Market Cross at Bottesford

Drawings from "The Northeast Corner" 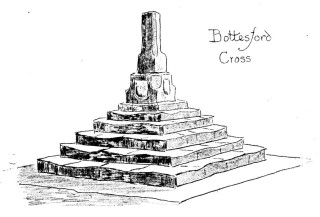 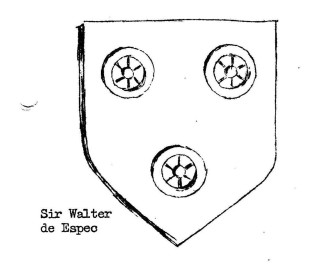 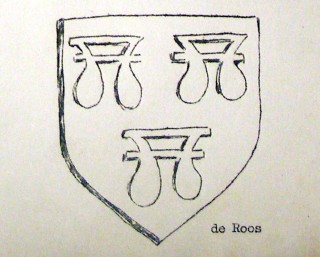 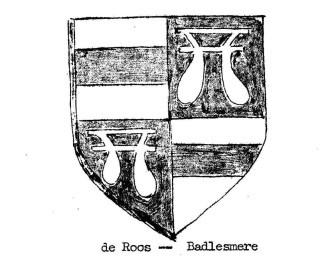 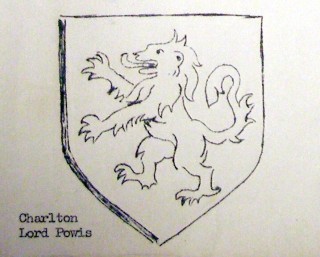 The Cross is one element in the original High Street which was as much part of the heritage of Bottesford in 1881 as it is today. It is illustrated in so many early photographs.

The right to hold a market or  “marked place”  was granted by the king in medieval times and a cross was often erected by the Grantee, who collected a fee from all the traders. In Bottesford, the cross was probably  erected by one of the De Roos family in about the year 1400  –  Sir William De Roos was a favourite of King Henry IV  at this time.

The top of the cross has been missing for many years and even in 1790 efforts to discover what it was like proved unsuccessful. The base of the cross is decorated by four  shields bearing heraldic arms, which are now nearly obliterated.  In 1790 they were still decipherable, with connections to the De Roos family as follows :

1.  Three Cart Wheels   ~   This represents the shield of  Sir Walter  D’Espec, who founded a Priory at Kirkham, and whose sister Adeline, married Peter De Roos.

2. Three  Bougets   or leather water bottles  ~  These are the arms adopted by a member of the De Roos family who had been on crusade to Palestine [William De Roos went on crusade in 1352 and his brother was a crusader in 1364]. The bottles are shown in pairs connected by  a wooden cross piece for carrying water on horse back in a hot climate. The De Roos arms consisted of  three white bougets on a red ground. This old term has passed into modern day English  –  the Chancellor of the Exchequer has a budget, or “bouget”, being a leather bag in which he carried his accounting records.

3. This shield contains the arms of De Roos and of Badlesmere.  It indicates that a De Roos has married into the Badlesmere family,  and the child of this union could display both arms on his escutcheon.

This material is abstracted from the teaching notes “The Northeast Corner” of Percy Stimpson and Lawrence Dewey, both  former headmasters of Belvoir School, Bottesford.