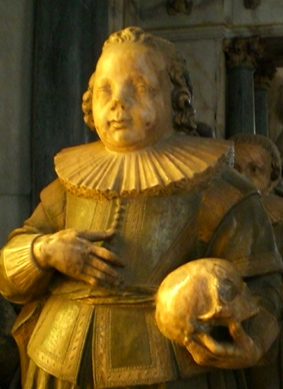 One of the most important English witchcraft cases took place in Bottesford and the Vale of Belvoir in 1618 when Francis Manners, sixth Earl of Rutland accused three local women, Joan, Phillipa and Margaret Flower of murdering his two sons, Henry and Francis  by witchcraft. The case is commemorated on the Earl’s tomb in St. Mary’s Church, Bottesford, part of his tomb inscription reading:

“In 1608 he married ye lady Cecila Hungerford, daughter to ye Honorable Knight Sir John Tufton, by whom he had two sons, both of which died in their infancy by wicked practises and sorcerye”

Most people in 17th century England believed as their ancestors had done that the world was ordered by hidden forces that could be influenced or controlled by the use of rituals and magical ceremonies. Magic was believed to be divided into two parts, white magic was the craft of healing whereas Black magic, Maleficium or Witchcraft was the craft of harming.

Witchcraft had become a criminal offence in England in 1542 and it was a capital offence punishable in the worst cases by hanging. It is estimated that around 300 people were executed in England between 1542 and 1680 (which may be compared with the estimated 20,000 deaths in Europe particularly in France and Germany). [i]

Some of the evidence of the wicked practises and sorcerye practiced upon Henry Lord Roos and his brother, have survived in the form of a pamphlet and broadsheet ballad, both written by John Burns in 1619. The pamphlet was entitled The Wonderful Discovery of the Witchcrafts of Margaret and Phillipa Flower, daughters of Joan Flower neere BeverCastle: executed at Lincolne, March 11th 1618. [ii]

2. The Wonderful Discovery of the Witchcrafts