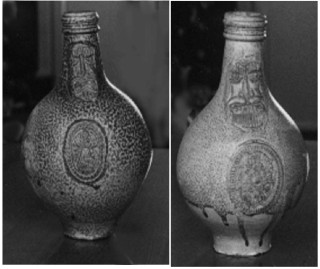 It was a peculiar feature of the ‘Image Magic’ described on the previous page, that is could be employed not only by the ‘aggressors’ in Witchcraft cases but also by the victims, as a way of defending themselves or their families. This defence was known as ‘counter magic’ and some very interesting examples have come to light with the discovery of two witch bottles in the nearby village of Long Clawson.

These bottles which are of a type known as ‘Bellarmines’ (old wine and beer bottles named after Roberto Bellarmino, an Italian cardinal of the late 16th/early 17th century) were excavated in area of Long Clawson, the ‘city’ area, when some old cottages were demolished to make way for the new Doctor’s surgery. Fortunately they were preserved as a result of being given to a local historian, Gilbert King, who used them in his talks on local history.

To explain the use and ‘function’ of these bottles it is necessary to examine the way that witches were believed to damage their victims. As we have seen, the spirit of a witch was linked to that of her victims (though not all witches were female), by some kind of contact between them, frequently effected by an animal familiar.

In the Windsor case Mother Dutton was able to kill by mixing her bodily fluids (which were magically linked with those of her victims) with the red wax of her model figures. Thus by harming her blood or saliva, she was able to transmit harm into her victims “and, the said four persons, being suddenly taken, died.”

Margaret Flower described a similar process in the Rutland case when she testified that :-

“her mother complained to the Earl against one Peake. who offered her some wrong, wherein she conceived that the Earl took not her part as she expected; which dislike with the rest, exasperated her displeasure against him, and so she watched for an opportunity to be revenged: whereupon she took wool out of the said mattress (given to Margaret by the Countess on her dismissal from the Castle) and a pair of gloves, which were given her by Mr Vavasor and put them into warm water, mingling them with some blood, and stirring it together: then she took the wool and gloves out of the water, and rubbed them on the belly of Rutterkin her cat, saying the Lord and Lady should have more children but it would be long first.” [i]

Many of the features that would later be used in a witch bottle are present in this quotation. Fabric connected with the victim is mixed with blood and water warmed and manipulated (in this case on a familiar). This key feature, is also mentioned in the Barnes text. For generations the normal remedy to employ, if you believed that you or yours had been bewitched was counter magic rather than criminal prosecution. Counter magic was the practise of turning the evil back upon the witch as in this example. When counter magic was used as ‘evidence’ against the Bottesford witch Anne Baker:-

“Being examined concerning a child of Anne Stannidge, which she was suspected to have bewitched to death: saith the said Anne Stannidge did deliver her child into her hands, and that she did no harm unto it: And being charged by the Mother of the Child, that upon the burning of the hair and the paring of the nails of the said child, the said Anne Baker came in and set her down and for one hours space would speak nothing:” [ii]

Because of the magical link between Witch and Victim, it was believed that Anne Baker could harm Anne Stannidge’s child by using the type of combination of manipulation of bodily fluids and image magic employed by Joan Flower. Equally she could be harmed in turn through the magical link, by the burning of the child’s hair and nail parings. The fact that Anne Baker was taken ill after Anne Stannidge’s counter magic was taken to be strong proof of her use of witchcraft against the child.