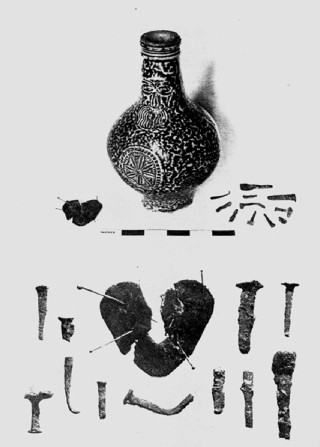 A Witch Bottle and its contents found on a Thames beach in London in 1926.

The Long Clawson ‘Bellarmines’ are examples of a type of response to witchcraft.  This method entailed heating the victim’s urine in a bottle, often mixed with human hair (as with Anne Stannidge’s counter magical defence of her child), and sometimes with metal nails and pins.  Examples have also been found with representations of the human heart cut from felt or cloth and pierced with pins. This practise must have originated with the use of pins or thorns to stab images, as in the Windsor case or the victims clothing as in our Rutland case. The bottle was then either buried under the hearth of a house in East Anglian examples, or thrown into a river or ditch as were examples found in London. The Long Clawson bottles followed the East Anglian pattern having been discovered underneath a cottage in the ‘city’ area. There are several 17th century written descriptions of the use of witch bottles and I would like to concentrate upon one of these reports in particular.

This report is by Joseph Blagrove of Reading called The Astrological Practise of Physick published in 1671. It was quoted by Ralph Merrifield in his definitive article The Use of Bellarmines as Witch-Bottles. Blagrove describes a number of counter magical techniques including the following:_

“Another way is to stop the urine of the Patient, close up in a bottle, and put into it three nails, pins or needles with little white salt, keeping the urine always warm. If you let it remain long in the bottle, it will endanger the witch’s life: for I have found by experience that they be grievously tormented making their water with great difficulty, if any at all, and the more if the Moon being Scorpio in Square or Opposition to his Significator, when its done.” [i]

He then goes on to explain why the witch can be tormented through the medium of the victim’s urine.

“The reason…is because there is part of the vital spirit of the Witch in it, for such is the subtlety of the Devil, that he will not suffer the Witch to infuse any poisonous matter into the body of man or beast, without some of the Witches blood mingled with it….” [ii]

Bellarmine bottles originated in the Rhineland of Germany and their proper name is Rhenish stoneware, they were originally very different in style from the Long Clawson examples. The mask on the vessel represents a burgher, a civic dignitary, who was intended to symbolise prosperity and good fortune. Rhenish stoneware became popular as tavern ware for storing wine or ale and from around 1560, large quantities were imported. As the vessels were mass-produced for the English market by less skilful potters, the mask became progressively less naturalistic and more stylised until it developed the forms which were nicknamed the Bellarmine. [iii] The name is a reference to the Catholic theologian Cardinal Bellarmine who had been involved in a theological dispute with King James I and who was angrily denounced by the King as the ‘ANTICHRIST’. [iv] Once this satanic name had been established, the folk traditions of English witchcraft belief were dynamic enough to see its possibilities as a new, yet at the same time traditional method of counter magic.

Although there is as yet not evidence to directly link the Long Clawson bottles with the Rutland case. However Barnes’ pamphlet does establish that between 1615-18. there were no less than 18 people, at all levels of society in the Vale of Belvoir who were believed to have been killed or seriously injured by witchcraft. The Long Clawson bottles do provide therefore evidence that this climate of fear lasted even after the real victims of witchcraft beliefs Joan, Phillipa and Margaret Flower had met their terrible ends.