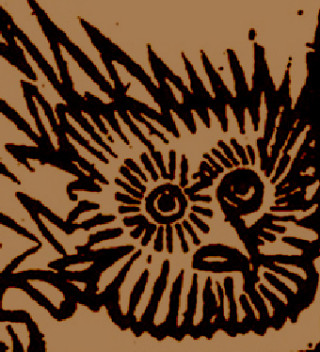 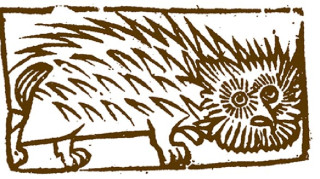 Woodcut illustration of a hedgehog (hedgepig!) familiar from the chapbook 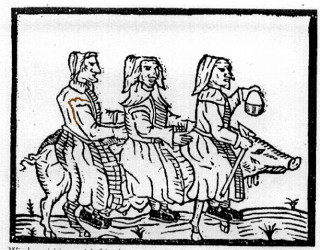 Northamptonshire Witches use a pig familiar as transport to visit a sick friend.

The idea of the witches ‘familiar’ an animal who acted as an intermediary between a witch and Satan is particular to England and was not mentioned in European cases (notwithstanding their far greater numbers).

The familiars in the Rutland case, include Joan Willimott’s cat and Mole as well as the Flower’s cat, Rutterkin and white and speckled rats who were alleged to have been suckled by Margaret and Phillippa Flower upon witches teats (supernumerary breasts which supplied blood rather than milk).

The concept of the familiar was based upon medieval English folklore which saw Satan, the Devil as the ‘Lord of the Flies’ and which argued that each individual fly was had within its spirit a tiny part of Satan’s essence and it was thus Satan who caused flies to behave as they did. Within this logical framework, it was possible to argue that animals larger than flies could equally well be the repositories of the Satanic essence but in far larger quantities to enable Satan to perform the intermediary role between the witch and the Devil. Cats, Dogs, and Rats were the most common candidates but the list of familiar animals could include Moles, (as in this case) Hedgehogs, Toads and Frogs and even in the case of the Northamptonshire witches (mentioned in Barnes introduction) Pigs. [i]

The role of the familiar was often to be the instrument of witchcraft attack. Ellen Green of Stathern testified that:-

“Joan Willimott called two spirits, one in the likeness of a kitten, and the other of a moldiwarp (a mole): the first, said Willimott was called Pusse, and Hisse, and they presently came ot her, and she departing and they leapt upon her shoulder, and the kitten sucked under her right ear on her neck, and the mole
on the left side in the like place. After they had sucked her she sent the kitten to a baker of that town (ie. Goadby) whose name she remembers not, who had called her a witch and had stricken her, and had her said spirit go and bewitch hime to death: the mole she then had go to Anne Dawse of the same town and bewitch her to death, because she called this examinate witch, whore, Jade etc., and within one fortnight after they both died.” [ii]

Barnes does not make it explicit in the text, but the mechanism of the ‘bewitchment to death of the Baker and Anne Dowse would have been that they had been bitten or scratched by the animals. Action which transferred some of the Witches malevolent spirit present in her blood and swallowed by her familiar into the bloodstream of her victims. This was familiar and was believed to be one of the methods employed by witches to cause their maleficium.