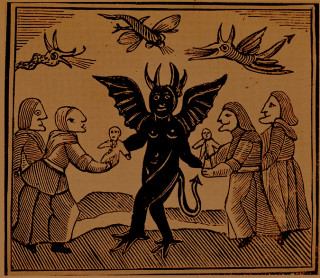 Witches receiving images from a Devil, for use in their charms.

The suspects in the Rutland case, however confessed to using another type of witchcraft besides attack by familiars, a method which is known as ‘image-magic’. This example is from an examination of Margaret Flower:-

‘She saith and confesseth, that about four or five years since, her mother sent her for the right hand glove of Henry, Lord Roos, afterward that her mother bade her go again into the castle of Belvoir and bring down the gloves of some other things and she asked “What to do?”. Her mother replied “To harm my Lord Roos”. Whereupon she brought down a glove, and delivered the same to her mother, who stroked Rutterkin her cat with it, after it was dipt in hot water, and so prickted it often, after which Henry, Lord Roos fell sick within a week, and was much tormented with the same.” [i]

This story of the glove was ‘confirmed’ by the Bottesford cunning woman Anne Baker in the following passage:-

“The said Anne Baker, March 2, 1618 confessed before Samuel Fleming, doctor of divinity, that about 3 years ago she went into Northamptonshire, and that at her coming back again, one Peaks’s wife and Dennis his wife of Belvoir, told her that my Lord Henry was dead, and there was a glove of the said Lord buried in the ground: and that as that glove did rot and waste so did the liver of the said Lord rot and waste.” [ii]

The mention of ‘Peake’s wife’ in Anne’s evidence is interesting because Barnes mentions an argument between Robert Peake and Joan Flower followed by an unsuccessful complaint to the Earl against him. (which was said to be one of the reasons for the Flowers seeking revenge against Lord Roos). [iii]

If Mrs Peake was talking about ‘stolen and rotting’ gloves in 1615, three years before the case, it does suggest that Robert Peake and his wife may have been the source of the witchcraft accusations against the Flower family.

In a more general sense however, the glove pricking is a variation of the most familiar form of witchcraft harm, sticking pins or knives into a model of the victim. A good example of this practise can be found in a witchcraft pamphlet that tells the story of a case that occurred in Windsor in 1579. The pamphlet was called ‘A Rehearsal both strange and true, of heinous and horrible acts committed by Elizabeth Stile, Alice Rockingham, Mother Dutton, Mother Devell, notorious Witches, apprehended at Windsor in the County of Berks.”

The section which deals with Image Magic reads as follows:-

“The manner of their enchantments, whereby four of the persons aforenamed were murdered was thus – Mother Dutton made four pictures of red wax, about a span long, and three of figures broad, for Langford, for his maid, for Master Gallis and for Switcher; and the said Mother Dutton, by their council and consort, did stick an hawthorn prick against the left sides of the breasts of the images, directly where they thought the hearts of the persons to be set whom the pictures, the same pictures did represent, and thereupon within short space, the said four persons, being suddenly taken, died. [iv]

4.‘A Rehearsal both strange and true, of heinous and horrible acts committed by Elizabeth Stile, Alice Rockingham, Mother Dutton, Mother Devell, notorious Witches, apprehended at Windsor in the County of Berks, in:- B Rosen, ed. Witchcraft in England 1558-1618, Op cit. p344