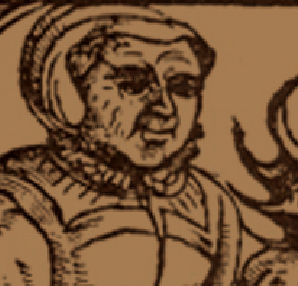 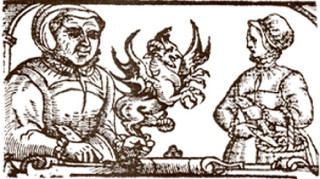 The Bottesford cunning woman, Anne Baker was widely suspected of crossing the barrier between white and black magic, which was why William Fairbarne had beaten Anne (who he believed had sent an illness called the Plannett  to his son Thomas). Anne was accused of murder by witchcraft.

“Being charged that she bewitched Elizabeth Hough, the wife of William Hough to death, for that she angered her in giving her almes of her second bread (i.e. stale): confesseth that she was angry with her and she might have given her of better bread for she had gone too often on her errands. “ [i]

This is the classic Maleficium accusation, the vast majority of English witchcraft cases are of this type. A village quarrel, (Elizabeth Hough gave Anne Baker stale bread when Anne asked her for charity) has been followed by misfortune, Elizabeth died suddenly.

Anne Baker was probably a witch in the minds of the villagers of Bottesford because she was manifestly failing as a cunning woman. Joanne Gylls asked her to discover if her sick child was fore-spoken, Anne looked at the child and said that it was, but she seems to have taken no further remedial action. She also confessed that she told Anthony Gill that ‘he might have had a Child of his own if he would have sought in time for it’[ii] i.e. employed her to find the bewitching spirit. It is probable the complaints against Anne came to the Earl from the people of Bottesford as in all probability did those against Joan Willimott come from the people of Stathern.

Joan provided the same defence to the charge of the witchcraft killing of John Patchett’s wife and baby, as had Anne Baker when she maintained that John Patchett would have had ‘his wife and child alive if he would have sought forth by it.’[iii] As with Anne, John Patchett should have employed Joan to protect his wife and new born baby who was Death Stricken and in fact both died shortly after birth.

She also sought to divert the Justices’ attention from herself by identifying Gamaliel Green, a Shepherd from Waltham who had a white spirit like a mouse which gave him power of the Evil Eye. However, she seems to have weakened at the end of the examination when she confessed that she had taken part in a witches meeting with Joanne, Margaret and Phillippa Flower. [iv]

In contrast her friend Ellen Green offered no defence at all, confessing to the Patchett deaths and other bewitchments and deaths, through the medium of the familiar spirits of a cat and a moldiwarp (mole). [v]