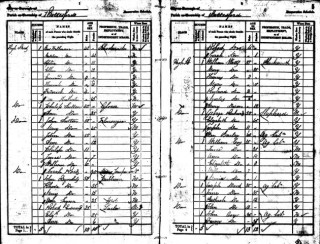 Pages from the 1841 Census of Bottesford

These transcriptions of 19th Century Censuses of Bottesford, Easthorpe, Muston and Normanton have been prepared as an aid to tracing village families and other aspects of the villages during the Victorian era.

National Censuses have been made every ten years, starting from 1841 (with the exception of 1941). Because of the 100 Year Confidentiality ruling only those from 1841 to 1901 have been available to us. Access to the 1911 Census has recently been opened up, but we have not been able to tackle any transcription thus far.

When the censuses were carried out, the country was divided into small districts each of which was covered by a single field officer known as an enumerator. During each of the Victorian censuses the parish of Bottesford was divided into two such districts, one being Bottesford itself, the other comprising Easthorpe and Normanton, while Muston was another separate district. There were thus three census districts within what is now the modern parish of Bottesford and Muston, each with its own enumerator and its own sets of census forms (forms filled in by the enumerator from answers provided on census night by the heads of households in their district).

Copies of census forms were kindly made available by local historian Sheila Marriott, and the data are also available online via Ancestry.co.uk, whose website is recommended. Information from these sources has been compiled as Microsoft Excel tables, which have been a boon to answering family history enquiries and in researching village life in the 19th Century. The tables for each census are set out in two ways. The main one reproduces the information recorded by the enumerator in the original sequence in which the households were visited. The other provides an alphabetic index of the people named in the census. The idea is that a person can be ‘looked up’ in the alphabetic index and then the corresponding information about where they lived, who their immediate family was and their occupation can be found in the main table.

These tables are being made available to users of this website. At the moment, tables for three of the censuses have been provided, being those for 1841, 1881 and 1901. The census are in the form of PDF files attached to this page: just click on the links to use them.

You will need Adobe Reader, or an equivalent, installed in order to read them.