You are here: Home>Topics>Census Information>The 1841 Census for Bottesford, Easthorpe, Muston and Normanton

The 1841 Census for Bottesford, Easthorpe, Muston and Normanton

A transcript of the census and an alphabetic index, in PDF format 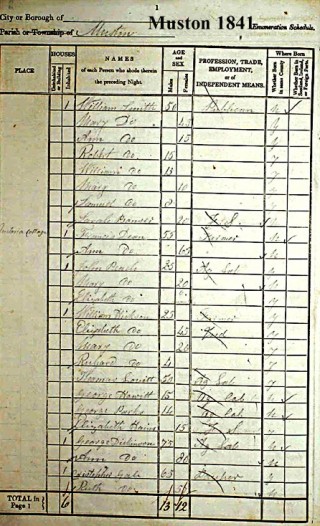 Page one of the 1841 Muston census

This page gives a transcription of the 1841 census for Bottesford, Easthorpe, Muston and Normanton.

Because of the amount of information, the tables are provided as four PDF documents that you can open using the links at the bottom of this page. Two of these contain the full censuses of Bottesford-Easthorpe-Normanton and of Muston, respectively, each in the sequence of houses in the original census. The other two documents are indexes to these tables, arranged in alphabetic order of the people’s names.

In these tables, each house (strictly speaking, each household) is indicated by a ‘Census Number’ in the left-hand column labelled ‘CNo’. This records the sequence in which the households were visited in the original census. The ‘CNo’ is also shown in the index tables, so that to find someone in the census you can look them up in the index then use the CNo to locate them in the full census to see where they lived (though this is often very imprecise to put it mildly), who their family was and what occupation they followed.

You will need to upload Adobe Reader on your PC in order to read them. This software is available as a free download from the Adobe website. With Adobe Reader installed, all you have to do is click on the appropriate document link at the foot of this page and the table will open. You can then read the transcript, print it or make a copy on your disc drive. When you have finished with the table, click the ‘return’ button on your web browser to get back to this page.

I have attempted to create an accurate transcription of the 1841 census, but there may well be errors, hopefully minor. Please use the Comments box at the foot of this page to point out any mistakes that you come across, so that I can correct them and produce an updated version.

The census completed in 1841 contained rather less information than those made later in the 19th Century, but it is the oldest complete census that is available to us. There were no house numbers in those days, and some of the street names have changed with time. Muston didn’t even have street names. For this reason, the addresses are often imprecise and hard to interpret.

As already said, I have indicated the successive houses in the census by giving each a number (a ‘census number’ indicated as ‘CNo’), starting from the start of the census. Thus B001 is the first house in the Bottesford census, while CNo’s starting with ‘E’ refer to houses to Easthorpe and those starting ‘N’ to houses in Normanton. Houses in Muston have a CNo starting with ‘M’.

There is an additional complication, in that the census indicates situations where two or more households lived in a single house. The first page of the Muston census, shown above, illustrates this. There is no house number or ‘CNo’ (though later census do number the houses). Instead, the enumerator made ticks on the line marking the right-hand side of the Houses column. Some are single ticks, others are double ticks. As far as I am aware, the double ticks mark separate houses, whereas the single ticks mark out individual households within multiple-occupied houses. So in the page shown, the first house contains the Smith family (given the ‘CNo’ M01A), and also their servant Sarah Bonser who is recorded as a separate household (M01B). The second house contains four households, respectively the Deans (M02A), the Peaches (M02B), the Hicksons (M02C) and a fourth with three agricultural labourers and a female servant sharing (M04D). Is this a correct interpretation? The census records 351 people in Muston, but only 20 actual ‘houses’. Perhaps some of these were actually small terraces which the enumerator lumped together as one ‘house’. Some households had ten or more people in them.

Similarly, in Bottesford B001A and B001B denote what appear to be separate households, as recognised by the census enumerator, sharing a single house (B001). It is not always clear what these distinctions were, as will become clear from studying the records. In many cases, it appears to have been a simple matter of two (or more) families occupying separate parts of a house, but in others the separate household appears to have been the servant’s quarters.

The index table gives all the people in the census in alphabetic sequence. It also shows which house or household they were in during the census, thereby providing the cross-reference between the two tables. Addresses are shown for the heads of household in this table.

This transcription is based on digital images of the original census pages compiled by Sheila Marriott, to whom we are most grateful, and the transcribed census data provided by Ancestry.co.uk.