You are here: Home>Topics>Census Information>The Victorian Censuses of Bottesford and Muston

The Victorian Censuses of Bottesford and Muston

Who actually lived in the villages, and what did they do? 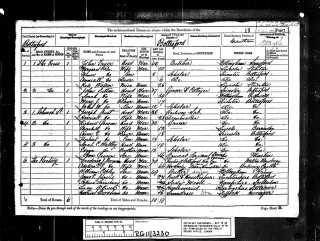 Opening page of the Bottesford 1881 census

Introduction
National censuses were started in 1841, after establishment of the General Records Office in 1837, and have been repeated every ten years since then. Those up to 1901 are open to public view, and provide an insight into village communities during the 19th century. Later ones are governed by a 100-year Exclusion Rule.

Public Record Offices, Family History Societies and the Family Records Centre
Census data are available at Public Record Offices (such as the Leicestershire PRO at Wigston Magna – a bit of a treck from Bottesford and Muston), libraries of family history societies (such as the excellent one of the Leicestershire and Rutland Family History Society in central Leicester) or the Family Records Centre in Islington, London (and you can get your Christmas shopping done while in Town).

Internet sources of records
The internet provides a means of examining censuses from the comfort, as they say, of your favourite arm chair. Pages for particular villages can be extracted and compiled, for instance using a spreadsheet program, to create a fascinating resource for further research. For Bottesford, an important source of information is that provided by the Guy’s of Bottesford website. This provides beautifully compiled census information for most of the available years, but does not include 1881, and only part of the 1901 census is included. In addition, it only covers Bottesford sensu stricto, and does not include data for Easthorpe, Normanton and Muston. Another source is the excellent and comprehensive database in the ancestry.co.uk website. The snag here is that, unlike Guy’s of Bottesford, this is a subscription site with only a limited amount of free data. Another limitation is that this site only lets you see the actual pages compiled by the census enumerator, not the report that was compiled following the census. Nevertheless, it is a very good source of information.

Changing street names
The census information is not always as clear and straightforward as you might expect. One problem is that street names have changed over the years. Many Bottesford locals will know that Albert Street used to be called Back Lane, and Belvoir Road used to be Mill Lane. How many know where Wright’s Yard, Richard’s Yard and Blue Bank were? Can anyone tell us where Huthwaite’s Yard was, or King Street? In Muston, the streets didn’t have names when the first censuses were made.

House numbering
House numbers are misleading. The censuses tell us which street a house was in (even though the street may have disappeared or its name changed subsequently), but they don’t always give actual house numbers. Houses evidently did not always have numbers in the 19th Century. The census official probably started at one of a street and criss-crossed his way to the other – or did he go up one side and back down the other? It can be very difficult to tell.

Since the censuses were carried out, houses have been knocked down, other built, and still others have been divided or, more frequently, amalgamated. There are a few fixed points, such as the Police Station in Queen Street (but not at the time of the 1841 census), but it remains difficult to work out with certainty precisely where many people lived.

Hand-writing
There is the problem of hand-writing. Reading census information depends on being able to read correctly the census officer’s hand-writing. Ancestry have done very well in building up their database of census data, but even they have understandably made mistakes. Many can be spotted and corrected with the aid of a bit of local knowledge, but there remain places where the images of the original forms are almost impossible to decipher. Ink smudges and over-writing combine with the old, unfamiliar writing style to create the problems, and we must be clear that Ancestry only show us black and white images of the original forms  (though probably better than the micro-fiche provided in libraries) where differences of ink colour are lost.

Even if we have access to the original census forms, we must remember that these are compilations made by the census officers of written information provided by each household. He may have had difficulty in reading some of these, and he was probably working against a fixed schedule. Some of the people providing the information would have had a low level of literacy, and there may have been inconsistency in the spelling of some names.

Is anyone missing?
it is apparent that the question of recording who slept under one’s roof on the date of the census was taken quite literally. Casual visitors would be recorded, but the head of household (or any other member of his family) might be omitted if they were not actually present that night. There are examples in the Bottesford records of households where no head is indicated, presumably because this person was away that night. Therefore, the census cannot be an exact record of everyone living in Bottesford or Muston, but it is a pretty good record, and the best we have.

The compiled records for Bottesford and Muston
Despite these problems, census records have been compiled so far for Bottesford and Muston in the 1851, 1881 and 1901 censuses. Records for the “Extraparochial Place of Belvoir” (Belvoir Castle and adjoining buildings) have also been added for 1851. This has been a major undertaking, and work is still ‘in progress’. The tables cannot be presented on this site for the moment, but enquiries will be answered as best we can.