You are here: Home>Topics>Transport>Bottesford's Railways 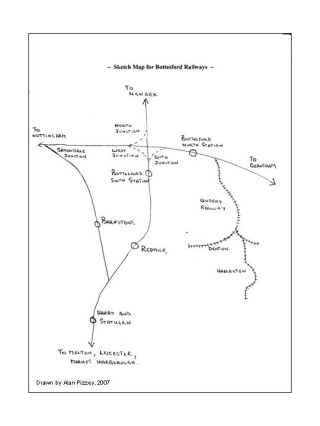 A sketch map of railways in Bottesford 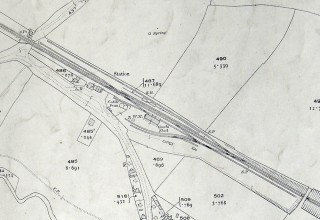 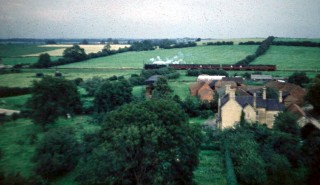 A train seen from 'Holliers' 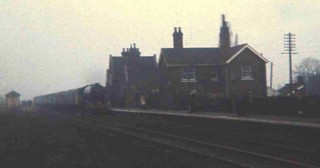 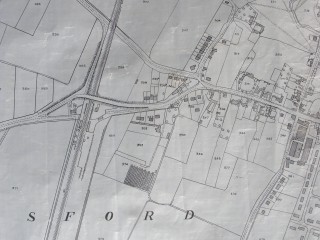 Map ca.1960 showing the site of Bottesford South Station at the west end of the village. 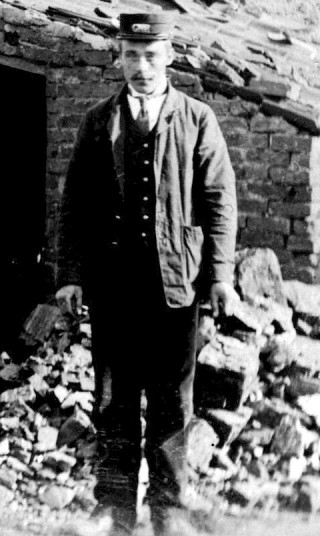 A local G.N.R. man. Can anyone identify him? 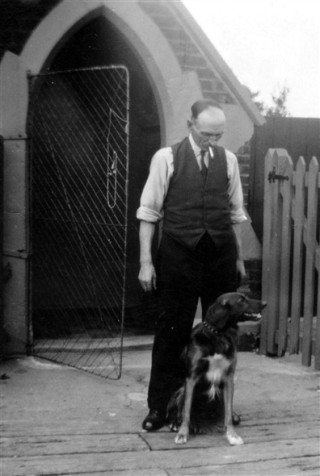 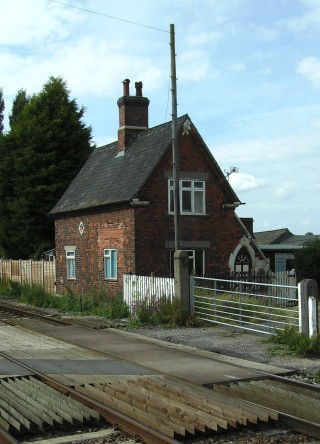 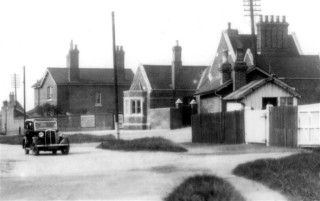 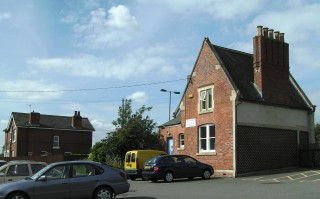 The remains of Bottesford Station today. The building was probably designed by the Nottingham architect T.C. Hines. 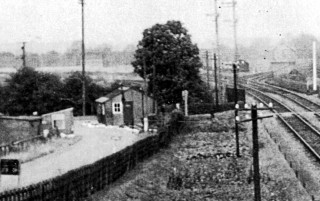 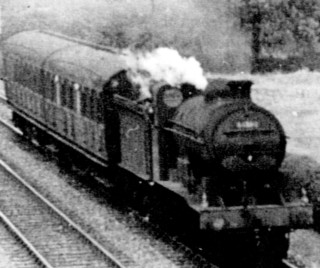 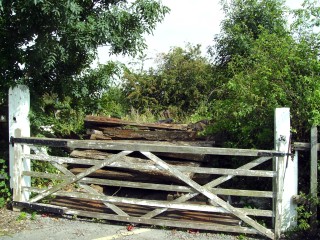 Gate to the goods yard today.

These notes set out the historical development of Railway Services in Bottesford, and it is hoped that they will encourage residents to communicate their memories of our Railway Heritage to add to them.

WHAT DO YOU KNOW?

CAN YOU PLEASE GIVE US MORE INFORMATION. YOUR COMMENTS ARE INVITED.

In 1838 it was first proposed to construct a railway line from Ambergate in Derbyshire to Nottingham, Grantham and on to the port of Boston. In the event the Nottingham to Grantham section was built, and passed into the ownership of the Great Northern Railway [GNR] which saw the route as a means to connect its east coast mainline with Nottingham for goods and passenger services. This line passed through “Bottesford for Belvoir”, an important destination on the route.

The Service – Then and Now – in terms of frequency, timing and convenience.

In 1854, the timetable for the Nottingham to Grantham line was published in the Grantham Journal. It showed the extent of the railway service to and from Bottesford at this early date. There were six trains a day in both directions on weekdays, with trains to Grantham running from 8.29 am until 10.09 pm, and to Nottingham from 9.18 am until 8.24 pm. The journey time to Grantham was usually 21 minutes, but an express could complete the journey in 12 minutes. To Nottingham trains usually took 42 minutes, but the express service would arrive after a 28 minute journey.

Today, Bottesford has eleven trains a day in both directions with shorter journey times than in 1854. The average time is 13 minutes to Grantham and 31 minutes to Nottingham, but this is still not as fast as the express service of 153 years ago!

Click this link to see a set of old photographs show the Flying Scotsman passing through Bottesford.

In the 1890’s, special weekend excursion trains brought day trippers from Nottingham to visit Belvoir Castle by horse drawn transport from Bottesford Station, and to take refreshment in the village.

This was the grandiose title of the North/South railway line through Bottesford which connected to Melton, Leicester, Market Harborough and Northampton. The GNR alone owned the section on to Newark. Bottesford had north, south and west junctions connecting the joint line to the established east/west route ~ see the sketch map and click here for a history of Bottesford South Station.

The exploitation of ironstone workings on the Leicestershire Wolds and connection to the coal traffic from Nottingham were more important than passenger service as an economic reason for the construction of this railway. Ironstone was carried north to the West Riding and coal south to London; fleeces for the Yorkshire woollen industry went north and yarn returned to the hosiery factories of Leicester. The likely revenue from these opportunities overcame the early objections of the ‘fox hunting’ lobby in the House of Lords in 1872. The GNR joined with the LNWR in promoting the line to counter plans by rival railway companies. The LNWR thus gained passenger service access to Nottingham and a share of the coal traffic using a loop line from Stathern to Saxondale via Barnstone. Many short quarry railways were connected to the main line, such as the line from Denton and Harlaxton which joined the east/west line at Muston. Locomotives on this line had to build up speed to haul trains over the bridge across the A52 – sometimes they stalled and had to run back for a second or even a third attempt. Some ironstone was carried to the Stanton Ironworks at Ilkeston. Thus the area south of Bottesford had several quarry railways whose track beds now form part of our heritage in use as footpaths, cycle tracks and bridle ways. The Rutland Railway Museum has some 0-4-0 and 0-6-0 “puffers” on show and further information and explanation of these quarry lines.

By 1880 Bottesford had four signal boxes and two stations with important junctions to the east/west line. The timetable of 1887 shows only 4 trains a day, both north and south, stopping at Bottesford, but it was possible to “stop” four more if required! Travelling south, the 7.49 am from Bottesford reached Melton at 8.19 am, and Leicester at 9.01 am. If you “stopped” the 9.37 am at Bottesford you reached Melton by 10.04 am, Market Harborough by 10.42 am, Northampton by 11.08 am and using a through carriage arrive at London by 1 pm. Trains from the south to Bottesford all went to Grantham; only trains stopping at Redmile went straight on to Newark, with a journey time of 31 minutes.

The LNWR provided locomotives for the Nottingham / Melton / Northampton service, and over the years Mr Webb’s designs of the 1870’s worked out their declining years on the line. In the 1920’s it was possible to see “coal tanks”, “cauliflowers” and “jumbos” at work and even the famous Precedent class

“Hardwicke” appeared. The GNR used such interesting locomotives as Stirling and Ivatt “Singles” and later, Ivatt “Atlantics”. A selection of carriages was employed from the six wheeler “bumpers” to smoother bogie stock, with some odd mixtures of liveries to be seen.

In early days on the joint line there was some coal traffic from Doncaster to Newark and thence south to Northampton. A daily Newark/Northampton goods service was operated by the GNR and they also operated a Grantham/Leicester service, both via Bottesford.

During the Second World War, freight trains used the line to the petrol storage facilities in the Redmile area. This traffic was a matter of great secrecy, but the district still received considerable attention from German bombers. There was a large American arms dump at Great Dalby, south of Melton, as well as one at Bottesford West, also supplied by this line.

Passenger traffic was always sparse on the joint line, since many of the stations were far from the villages which they served. The more flexible bus services were strong competitors in the 1940’s and 50’s. By 1950 only two trains a day travelled from Leicester to Grantham, and this service was withdrawn in 1962. Today, villagers relate how, when they were boys, they visited the signal boxes in the evenings for a chat and a cup of cocoa with the signalman. Even in the 1970’s night time oil tanker trains from the Humber Estuary came south via Newark and round to the Bottesford west signal box, where they gave up their “token” to the signalman. Today there is still oil freight traffic to be seen on the east/west line at Bottesford.

Throughout its life however the line did provide a useful route for Excursion Trains running at weekends from Leicester to the coast at Skegness, Mablethorpe and Sutton on Sea. At one time excursions ran via Newark and Doncaster to Bridlington or Scarborough. Trains comprising fourteen full bogie coaches made the journey to the Lincolnshire coast hauled by a selection of elderly locomotives. Even as late as 1954 20,000 passengers travelled on this service in 72 excursion trains during the season. A typical journey departed from Leicester at 8.30 am and 2 hours and 40 minutes later arrived at Skegness – returning by 9.16 pm. Some of these excursions were scheduled to stop at Bottesford – 9.39 am to arrive in Skegness at 11.10 am. Seasonal holiday trains ceased running in 1962 when the north/south line from Melton to Bottesford was closed.

Peter Mackness has commented that the steam train shown in the photograph at Orston Lane crossing would most probably be one of the Grantham – Leicester services, in this case bound for Leicester. During the 1940s and 50s trains on this service usually consisted of two coaches and were almost always hauled by a J6 0-6-0 tender engine from the Grantham shed as shown in the picture.

In the 1930’s the LNWR arranged various day time excursions for football matches and race meetings (The St Leger at Doncaster) starting at Rugby and stopping at many stations on the way, and shopping trips with shops organised to stay open late in the evening.

Working conditions were hard for employees on the joint line and there were some differences of rates of pay and bonus between the GNR and the LNWR. At the turn of the century plate layers would work a 12 hour day for 18 shillings a week, and experienced signalmen could earn 24 shillings per week. A station master on the GNR had a house rent free with electricity and gas paid for as well, but the LNWR pay scales were later adopted and station masters were then charged a rent for their accommodation.