You are here: Home>Topics>Transport>The A52 and Bottesford

The A52 and Bottesford 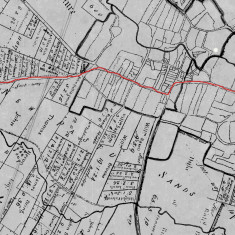 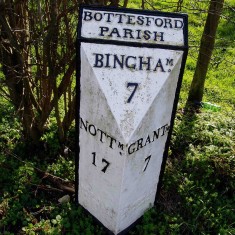 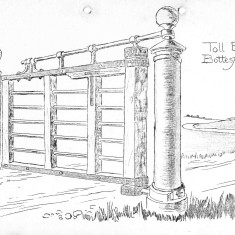 Toll Bar Bottesford - Philip Sutton recalls that for many years the metal parts of the gate were stored at Belvoir High School before removal for 'safe keeping'. Its current location is no longer known. Efforts have been made to trace its current location via the Leicestershire Museum Service. It was thought to be in a store at Barrowby. Unfortunately we have not been able to obtain any answer to enquiries attempting to verify that information 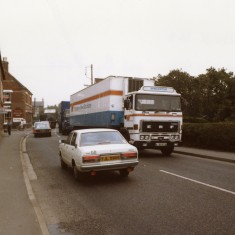 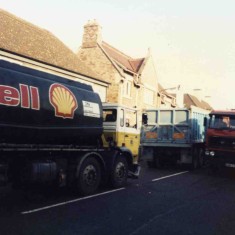 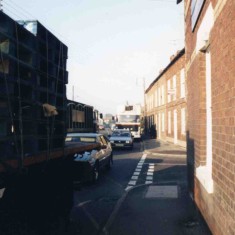 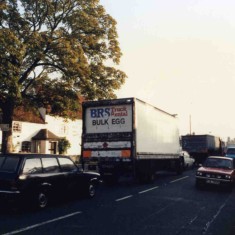 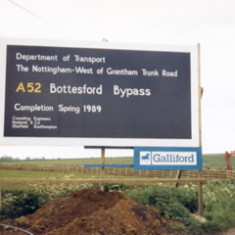 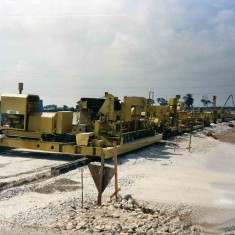 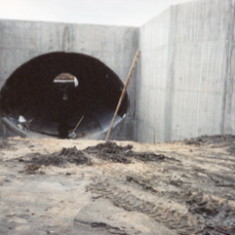 Culvert to take the River Devon under the Bottesford by-pass - Spring 1989. Unfortunately it was not big enough to take the rain waters in July 2001 and the road flooded 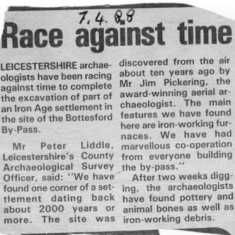 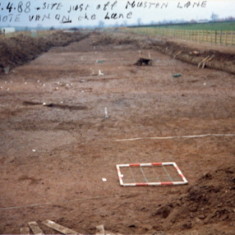 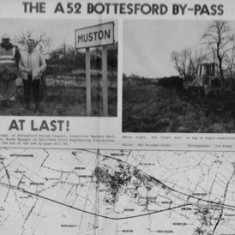 The A52 Bottesford bypass - At last. Unfortunately there was one maojr and two less severe road traffic accidents within 24 hours of its opening. 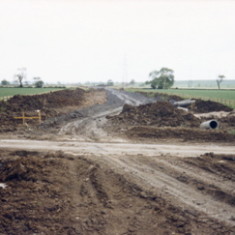 Bottesford A52 by-pass opened on the 6th February 1989, 14 weeks ahead of schedule. Unfortunately there were three road traffic accidents within 24 hours of its opening - one major and two minor

In the 18th and 19th centuries the road from east to west gradually became the most significant direction of transport in the Parish. The road connecting Grantham, Bingham and Nottingham was ‘turnpiked’ and the money raised was used for repairing damage caused by carriages and heavy carts loaded with coal and other goods. Michael Honeybone, in the Book of Bottesford, suggests that there were two tollgates on the road, one close to the junction of Orston Lane and Nottingham Road and the other by the Cross and Stocks. However, the development and use of the Grantham Canal in the 1790s and the railway line from Nottingham in the 1850s led to a marked reduction of wagon traffic carrying heavy goods. This resulted in the Nottingham to Grantham road being “de-turnpiked” on November 1st 1876. Two cast iron mile markers are still in place at the side of Grantham Road.

The road remained relatively quiet with low volumes of traffic until the early 1900s. The Bottesford School Log Book records that in July 1912 the school managers were considering what might be done “to lessen the danger caused by motor cars and other traffic coming around the school corner”. It was thought that a wider footpath might help. In September 1912, a school inspector suggested that a notice board outside the school could give a warning to motorists!

The problems associated with heavy traffic did not disappear. In April 1927, staff at the school were finding it increasingly difficult to teach because of a “great increase in motor traffic”. It was decided to install a partition in the main room to separate Classes 1 and 2. It was thought  that “this should help considerably in easing the strain of talking during oral lessons”.

In 1948, it was also noted that there were problems in crossing the main road at lunch times. The school dining hall was located in Queen Street in what is now the Baptist Chapel.

The possibility of a by-pass had been discussed about since the 1930s and in 1967 a letter from a Bottesford resident published in the Grantham Journal vividly describes the A52 trunk road:

“Bottesford is a terrifying and hair-raising Silverstone circuit with traffic travelling at a ridiculous speed from Robert’s shop (now ‘The Olde Rutland Café’) to the West End with huge lorries travelling at well above the speed limit and cars actually over-taking them, breaking the speed limit with impunity.”

This correspondent also mentioned that the school corner had been modified by setting back a brick wall but traffic regularly mounted the pavement. The writer  wondered how long it would be “before a child was killed”. The writer also felt that the introduction of double white lines, illuminated 30 m.p.h. signs and other safety measures were urgently needed because “a by-pass is a rosy dream of a far distant future.”

By the late 1970s the increase in traffic through the village was becoming more evident. The transport policy of the time focused on road haulage and after the rail strike of 1982, the axle weight of lorries had increased. The lorries passing through were far too big and accidents were becoming more frequent. Before the completion of the by-pass in 1988 nearly 6000 vehicles a day passed through the village. Over one third of these were goods vehicles.

In 1983 the Department of Transport  held a public exhibition of plans for the Bottesford By-pass. A public inquiry took place in April 1986 and the inquiry report was completed in July 1986. However, decisions about the re-opening of the disused railway line delayed its publication.  By April 1987, a public meeting to voice concerns about the delay was being planned. Villagers were talking about extreme measures to get the by-pass off the ground. Suggestions included human road-blocks, inconvenient parking and slow moving vehicles.

Delays did not continue. Construction started in December 1987 and the by-pass finally opened in February 1989.