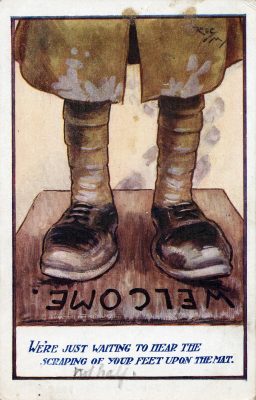 A First World War postcard with a cartoon showing the longed for return of the Tommy to his family home.
From Janet Dammes' family archive.

Postcards, photographs and memorabilia from before, during and after the First World War, contributed by Mrs Janet Dammes. They include pictures of members of the Box family who served in the army, including William Henry Box who was killed during the fighting. Also pictures of Henry’s sister Evelyn Box, who was Mrs Dammes’ grandmother. There are pictures of Edwardian Skegness, and one of Elston Manor, Near Newark, where Evelyn Box worked at one time. There is a series of First World War postcards, and one of the Menin Gate taken in the early 1920s. Finally, there are pictures of a tiny souvenir metal box (probably a match box) from France, which contains a set of minute prints of photographs of monarchs and political leaders from the war years.