Postcards of Skegness Clock Tower and the Parade, Edwardian 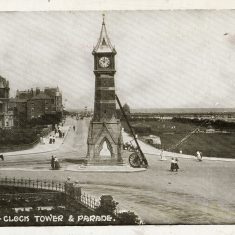 A postcard of the clock-tower at Skegness around 1913. The card was posted to Evelyn Box by her mother on 18th December 1913, a time when 'Eve' was working at the rectory at Hawksworth, Notts.
From Janet Dammes' family archive. 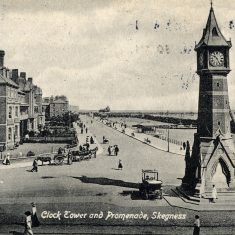 Two postcards with very similar views of the clock tower, a well known landmark at the centre of Skegness shoreline, with the Parade and its house extending into the distance.