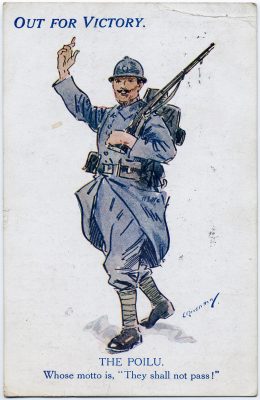 Postcard of a French infantryman ( a "poilu") in the First World War, with the famous heroic motto of the French resolve in the face of the German advance on Verdun.
From Janet Dammes' family archive.

This postcard displays a cartoon by L. Raven-Hill, of a French infantryman about the time of the Battle of Verdun. Leonard Raven-Hill was an English illustrator and cartoonist (1867-1942).