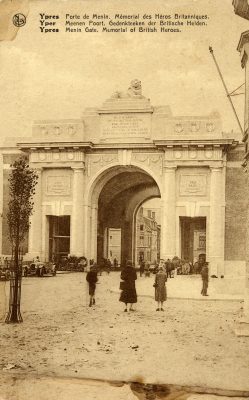 A post-war picture of the Menin Gate in Ypres, Flanders.
From Janet Dammes' family archive.

The scene at the Menin Gate Memorial of British Heroes, as the cation reads, soon after its unveiling in 1927. The card was sent to Evelyn Marston, nee Box. The postmark appears to show that it was sent in 1926, but the ‘6’ is indistinct and may be an ‘8’.