The Gales of Muston

Out of the Vale of Belvoir 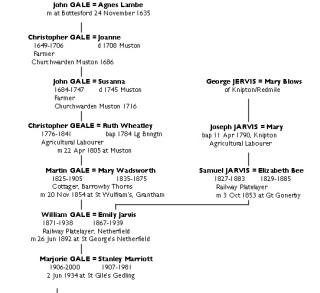 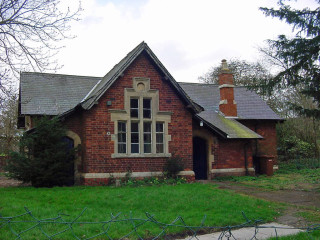 The original school building at Muston, now used by the community. The gateway to literacy for the Gales 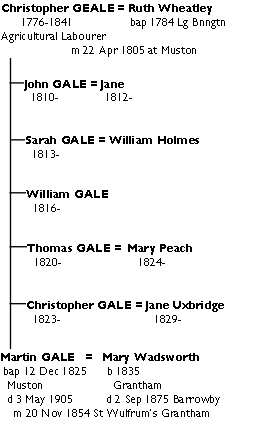 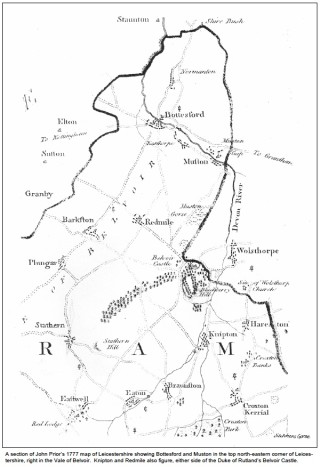 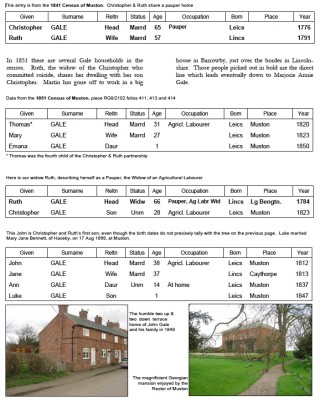 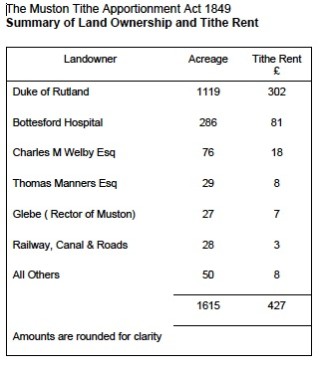 The Gale with Jarvis lines shown here reveal a life circumstance based on winning a living from  tilling the soil. The early members of the Gale family had access to their own land in that they are described as Farmers , and of sufficient stature to hold down a year’s term as Churchwarden  at Muston Parish Church. Our branch comes down through Christopher Geale , 1776-1841, who eked out his life as a labourer on the land, with support from the parish as a pauper towards the end.

Christopher’s life came to a sad conclusion in 1841, with his death certificate recording the cause as being lunatic, hung himself . He was actually probably just depressed. With no work, pauper status, and failing energy, life may well have seemed very black. With such suicides, the family usually tried to arrange for a lunatic diagnosis , thus enabling the body to be buried in the consecrated ground of the village churchyard.

The Gales appear to have started in the big parish of Bottesford, the principal settlement in the Vale, then moved on to the nearby village of Muston.  The Jarvis branch eked out their lives right under the shadow of Belvoir Castle, at Knipton and Redmile.

In his edition of Prior’s 1777 Map of Leicestershire, J D Welding writes:

“Belvoir castle dominated the area not only physically but also economically. The Duke of Rutland could also look upon two and twenty manors of his own paternal inheritance . His income from property is given as £20,000 per year, and he was patron of twenty churches. No framework knitting was permitted in the Vale of Belvoir, so an influx of poor workers was prevented.  The first outside intrusion into the Vale came with the Grantham Canal, which was opened in 1793.  The relationship of the villagers to their Lord is illustrated by the fact that every Thursday morning at the castle there was a distribution of fifty-six penny loaves to the poor of nine parishes; Woolsthorpe received five, Knipton nine, Plungar three, Barlston six, Redmile six, Bottesford eighteen, Muston six, Braunston five, and Croxton eight.

Tied to the land

The lot in life for Christopher Geale, of that generation before rudimentary elementary education came along.  Not for him the opportunity to get away from the hard  slog of the landless labourer.  Living in a community almost wholly owned by the Dukes of Rutland, who prevented other types of work coming into the Vale, the only way to earn a crust was to be hired by a richer tenant, or a gangmaster from another village.

Christopher’s well-off Rector of Muston (1783-1789), the famous poet George Crabbe, summed  it up well in one of his verses:

“Go then, and see them rising with the sun

Through a long course of daily toil to run,

This hopeless grind must have done something to these simple men. Ronald Blythe, in his celebrated book of rural life, Akenfield, makes this observation through the eyes of a modern young farmworker:

“The women never lost their independence during the bad days as the men did.  The men were beaten because the farms took every ounce of their physical strength, and as they had no great mental strength because of lack of education, they were left with nothing. Their physical strength was their pride and as soon as it was gone they became timid.”

Perhaps Christopher was such a beaten man.  Aged 65, his strength gone, sustained by parish handouts, and seriously depressed.  Perhaps that accounts for his sad and untimely death, out of despair.

Martin Gale would not have had a very auspicious start in this family. When he would have been 15 he is not recorded in the 1841 census as living with Christopher and Ruth.  In 1851 he is recorded as settled in the big house next to the church in Barrowby, in service to the Mullhouse family of Harness Makers.  After his marriage in 1854 he returned to the land, but this time as a Cottager with 8 acres, on Barrowby Thorns Farm.

Gale in the Census

The Tithe Settlement in 1849

A feature of the rural economy was the system of tithes.  By one means or another, users of the land had to yield up a portion of the value added by their efforts to the owners of the great and small tithes.  It was a very complicated business, but one intended outcome was to ensure the provision of pastoral care by a Clergyman.

Muston’s clergyman was a Rector, which usually indicates that he was due the great tithes .  Judging by the size and opulence of his house, shown on the previous page, he was doing well off the backs of the local farming community.   In many places, by local private settlements or Acts of Parliament, this system of delivering a share of the produce to the tithe-owner was commuted to a fixed tithe-rent charge.   This method of financing the Churches’ ministry thus became a simple overhead on the use of land, which diminished over time as produce prices and efficiency rose.  Although the tithe-owners then had a simpler way of being paid, and in the form of cash instead of produce, because the level was fixed, its value steadily crept down, with inflation.  An alternative device used was to tidy this matter up in the Enclosure Act for the place. For example, in Rothley, Leicestershire, the Vicar in 1782 was given land and a farm in lieu of tithes so that he could organise his own support either by farming, or from rental income.

In many areas the voluntary commutation process never happened.  Parliament eventually forced the issue and and in 1849 Muston had its own statutory Tithe Apportionment Act.  A barrister, John Job Rawlinson, was sworn in as a Tithe Commissioner  for Muston, and he set about organising a survey of land size, use, ownership and occupancy.  He had a comprehensive schedule produced with accompanying detailed map, and against each plot he assigned a future annual rent charge.  The charge was based on the statutory 7-year average formula designed to approximate to the current level of the tithe value. Some of these arrangements were redeemed , bought out by some sort of capital settlement.

In the schedule there are two Gale references.  Our Ruth has a little garden at plot 131.  It can be seen at the top of the map overleaf.  Her garden was owned by the Duke of Rutland, and she is listed as having to pay five pence to the tithe-owner, each year.  Her eldest son John Gale is listed with five others occupying the six tenements and gardens at plot 164 owned by Thomas Winter.  3sh 3d tithe-rent is payable here.  These six tenements still stand in 2005, pictured on the previous page, complete with their outdoor privies at the bottom of the gardens.  Below is a summary of the land ownership, and part of the Commissioner’s Concluding Statement.

Earlier in the Commissioner’s Statement is a summary of land use.  Of the total titheable land of 1,638 acres, 991 acres are Arable, 585 acres Meadow Pasture, 6 acres are used by the Grantham Canal, and 56 acres are Roads, Wastes & Fox Coverts.

Extract for the Commissioners’ Statement

“..And whereas I find that the Rector of the said Parish for the time being entitled to all the titles thereof.

Now know ye that I the said John Job Rawlinson do hereby award that the annual sum of Four hundred and twenty six pounds fourteen shillings by way of Rent Charge subject to the provisions of the said Act shall from the first day of January next following the confirmation of the Appor-tionment of the said Rent Charge be paid to the Rector of the said parish for the time being instead of all the tithes arising from all the lands of the said parish except the Glebe.”

“….In Testimony whereof I have hereunto set my hand this third day of October in the year of our Lord One Thousand Eight Hundred and Forty Eight.”

Earlier in the Commissioner’s Statement is a summary of land use.  Of the total titheable land of 1,638 acres, 991 acres are Arable, 585 acres Meadow Pasture, 6 acres are used by the Grantham Canal, and 56 acres are Roads, Wastes & Fox Coverts.

This short history of the Gale family is taken from a fuller account published by Pauline and Terry Sheppard. They have kindly allowed us to republish their research work. The complete document is available for download by clicking on the following link to ‘The William and Emily Story’, a privately circulated volume produced to document the results of searching out one branch of the people of Pauline Sheppard’s past. Please be aware this is large file.