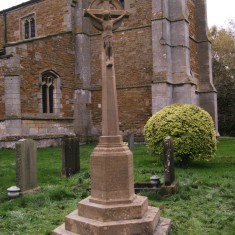 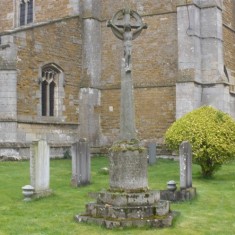 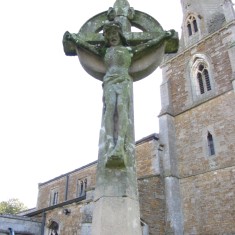 Half way through the restoration 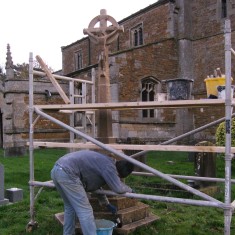 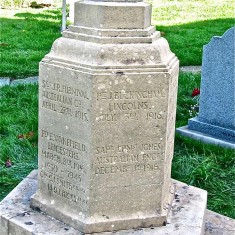 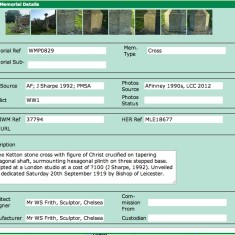 The Muston War Memorial in the St John The Baptists church yard has recently been restored. Formerly listed as at risk this important monument sculptured by William Silver Frith is now structurally secure and the inscriptions are fully legible.

Liz Blood from the Leicestershire County Council War Memorials Project assisted the Bottesford Parish Council in submitting a grant application in aid of the restoration. Capital Stone from Bunney undertook the work in time for the 2013 Remembrance Sunday.

‘A fine Ketton stone cross with figure of Christ crucified on tapering hexagonal shaft, surmounting hexagonal plinth on three stepped base. Sculpted at a London studio at a cost of £100 (J Sharpe, 1992). Unveiled and dedicated Saturday 20th September 1919 by Bishop of Leicester.’

Country of birth and death: England

Born in Leicester, Leicestershire. The son of Henry Frith (c.1820-1863, born in Westminster, London died in Gloucester), sculptor and stone and wood carver. William studied at Lambeth School of Art from the late 1860s and then concurrently at the Royal Academy Schools from 1872. When John Sparkes established the South London Technical School of Art in 1879, Frith succeeded Dalou as tutor of modelling after a couple of months. He held the position from 1880 until his death in 1924 and became one of the most influential teachers of sculpture in the last decades of the nineteenth century and beginning of the twentieth century. Frith’s numerous students included: Harry Bates, George Frampton, Frederick William Pomeroy, Sir William Goscombe John and Henry Poole. From 1895 Frith reduced his hours and was assisted by a former student, Thomas Tyrrell (c.1857-1929). Frith’s eldest son, Edgar Silver Frith (1890-1974) also became a sculptor and took over the teaching at SLTAS after the death of Tyrrell in 1929.

There might have been local connections that led this well known sculptor being commissioned to produce the Muston War Memorial Cross.