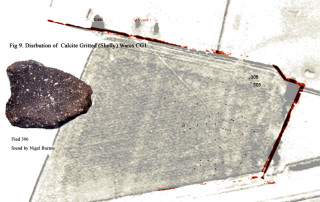 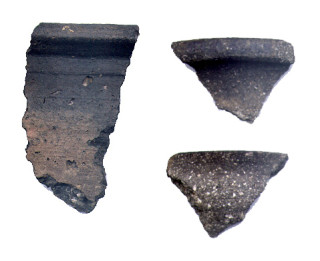 Often known as `Shelly Ware’, CG1A fossil shell tempered fabrics get their name from the fact that fossil shells were mined by the potters, finely pounded and mixed with the clay of the pot in order to strengthen the fabric of the ware. In this area most of the fossil shell, or calcite grit, came from sites in Charnwood Forest. This ware was being manufactured in the late Iron Age and production continued uninterrupted by the Roman invasion of 43AD into the second century. CG1B ware came from Harrold in Bedfordshire and is also known as South Midlands shell-tempered. Production of CG 1 B also began in the first century but it continued throughout the Roman period experiencing a major expansion in the Fourth century. It is likely that therefore the CG 1B shard 305 from Easthorpe dates from this period.

Fifteen of these shards seem to correspond in position with what I have termed the `Railway track’ crop mark, visible on the left of Figure 5.