You are here: Home>Topics>Roman Archaeology in Easthorpe>Roman Discoveries during Fieldwork at Easthorpe, Bottesford

New evidence of Roman life in the Bottesford area. 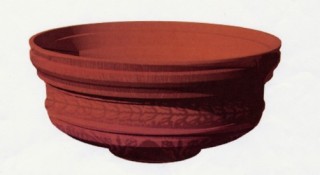 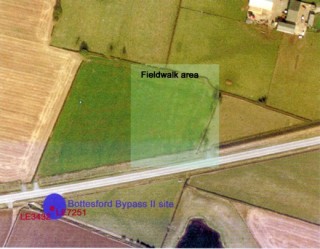 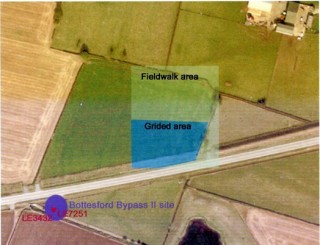 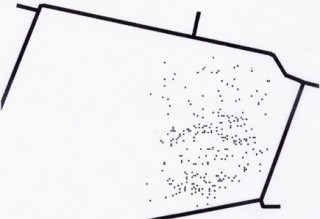 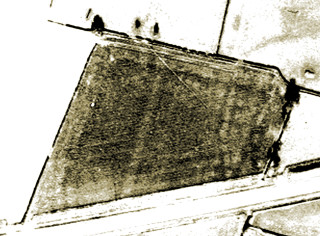 Fig 5 Aerial Photograph of the field enhanced with Photoshop 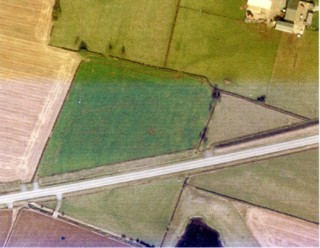 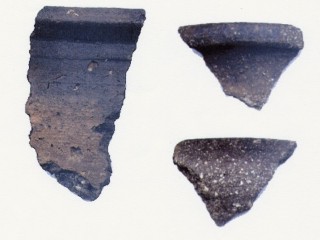 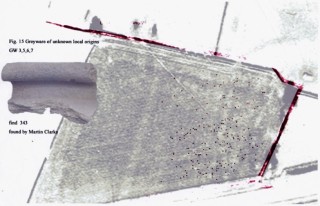 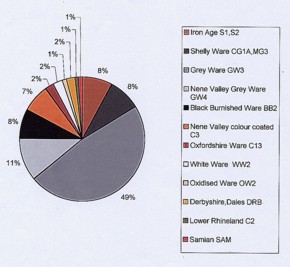 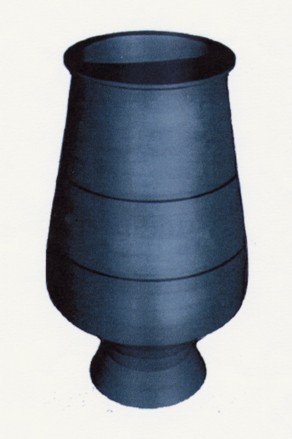 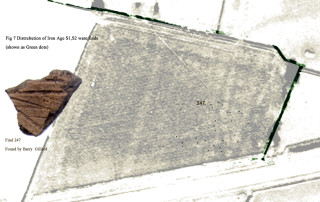 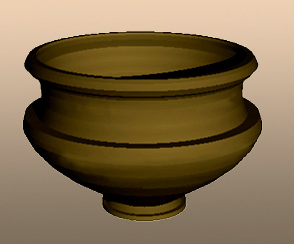 With the approval of the Parish Council, I became Parish Archaeological Warden for Bottesford, in July 2001, after having lived in the village for twelve years. The Leicestershire County Council Museums, Arts and Record Service (LCCMARS), set out the objectives of the parish warden scheme in Leicestershire and Rutland in the following terms:­-

To establish Archaeological Wardens in every parish in the two counties, who will act to develop our understanding of the past in their parishes, promote sympathetic interest in archaeology, and improve communication between the general public, LCCMARS and Rutland County Museum.

After consultations with Peter Liddle and Richard Pollard of LCCMARS about the best way of fulfilling these objectives, I decided to concentrate upon the area of the Bottesford Bypass for my first field survey project. This decision was made because the line of the bypass had been excavated before construction in 1988 and sites had been discovered which the County Archaeologists thought might benefit from further study. These sites were Bottesford Bypass I at Muston, SMR no’s LE 7067, LE6188, LE7960, LE9090, which contained Mesolithic flints, Iron Age, Roman and Anglo­-Saxon pottery and ditches, and Bottesford Bypass II at Easthorpe, SMR no’s LE3432 and LE7251, which were a Mesothlic blade and a Roman occupation site represented by a foundation trench, pottery, 3 brooches and 47 coins.

My initial approach to the landowner, Mr John Goodson, for permission to walk on the fields near the bypass proved to be particularly productive. Not only was Mr Goodson kind enough to allow me access to his land, he was also able to point me toward an area of one his fields, which he believed contained Roman pottery as well as showing me four Roman coins and two flint tools which he had discovered.

Together with my friend Martin Clarke we made an initial reconnaissance fieldwalk on the area identified, which was the northern section of a recently ploughed field that had been bisected by construction of the bypass (the site Bottesford Bypass II being in the southern section of the field). Our survey showed that Mr Goodson was correct and the field was indeed rich in Roman material. However, we found that the spread of finds was distinctly patchy with some areas full of shards whist others were bare.

The next step was to visit the Leicestershire County Archaeology Department at Glenfield, where Peter Liddle and Richard Pollard showed me the assemblage of shards from the Bottesford II Bypass excavation, and Richard identified some of the forms for me.

On August 26 the local archaeology club FLAG (Framland, Local Archaeology Group a newly formed group based upon WEA archaeology classes in Plungar) carried out a fieldwalk in the area and recovered an assemblage of 483 shards of Roman and Iron Age pottery, 2 Roman coins, 1 Saxon Shard, 15 Medieval shards, 4 worked flints, 2 Roman counters, Bone including a Boar’s tusk and a collection of possible building materials.

It is the examination of the Roman and Iron Age pottery and material which forms the basis of this preliminary report.

The field we were investigating (Fig.1) had recently been ploughed and harrowed. Because of the patchy nature of the finds which had been noticed during the reconnaissance, it was decided that the methodology to be employed during the fieldwalk would be to layout a 10 meter grid with canes (rather than the standard Leicestershire Community Archaeology traverse and stint system), for two people to search within each grid line and for any finds within a particular square foot to be bagged and left in situ until marked up with their National Grid Reference as determined by GPS equipment which was provided by Matthew Bradwell and Barry Gillard. GPS (Global Positioning System), a relatively new technology at this time, uses satellites to accurately fix locations on the National Grid system.

Eleven people took part in the fieldwalk which proved to be unexpectedly successful. Indeed our success was the cause of some problems in that the density of finds meant that we could not cover the whole field in the day that Mr Goodson could make it available (because of his need to plant his crop). In the event we gridded the bottom right hand corner of the field in the way shown on Figure 2 and decided in the last hour available to walk freely over the top right hand corner, bagging and GPS marking finds.

In retrospect this was perhaps an unfortunate decision as it might have affected interpetation of any pattern discovered, in that we looked in some areas harder than in others. However, it was made in the enthusiasm of the moment and it has not, as I believe I can show, had any drastic effects.

The next stage following the fieldwalk was to sort and wash the finds. Because of large number of ceramic finds I decided to concentrate on the pottery. I entered the GPS numbers into the computer in Microsoft Word and Matthew Bradwell was able to fit them into a map of the field using a computer programme which translates GPS information into 2D form making each find a dot on the map (Fig.3).

Accompanied by Adam Smith, I showed the finds together with this map to Richard Pollard for initial identification of pottery types, and there followed a discussion on whether the finds followed a simply random pattern (the result of the movement of the shards during 1600 years of ploughing), or if the pattern of finds might have any archaeological meaning.

In order to test the hypothesis that the finds pattern did in fact mean something, I went through the finds and classified them into pottery fabrics using a system provided by Nick Cooper of Leicester University. Roman Pottery was manufactured in many different places in Britain and the Empire and in many different styles and forms during the 400 years of Roman occupation. The classification of fabrics therefore provides archaeologists with a valuable diagnostic tool to understand Roman sites.

The system used to classify the pottery finds was based on this summary:­

A summary of the Leicestershire Roman Pottery Fabric Type Series

To allow this report to be used independently, a summary of the fabric

codes used, their common names, and concordance with the National Roman Fabric Reference Collection (Tomber and Dore 1998; Pollard 1999) when appropriate, is provided below.

CG1B   Fabric as A but becoming widespread in the later Roman period from Harrold, Beds. (Brown 1994) (HAR SH).

The above system was however amended slightly to include Iron Age ware, S1, S2, Samian ware (SAM) and Derbyshire and Dalesware (DRB), after consulting Nick Cooper, to more fully reflect the nature of the Bottesford finds.

Once the find bags had been numbered they were classified into twelve of the above main fabrics. Matthew was then able to produce a series of maps which showed the positions of each set of finds within the field. I hoped that a concentration of one type of ware from a particular chronological period in one area would prove the non­random nature of the finds. In the event these distribution maps were interesting but not conclusive.

I then had the idea of comparing the distribution maps with an aerial photograph of the field, using the computer programme Adobe Photoshop to overlay the maps onto the image of the field. I obtained a scan of an aerial photo of Easthorpe from Leicestershire County Council and began the comparison. These results were promising but the image was very small scale.

To solve this problem Richard Knox of LCCMARS helped by producing a larger scale scanned image Fig 4. The following section shows the results of comparisons between the distribution maps and this photo (Photoshop enhanced to show the crop marks) Fig 5. I believe that they show that there is indeed a good correspondence between the finds locations and crop marks visible on the photo and that the finds pattern is therefore not random but is indeed archaeologically significant.

Fig.6 is a pie chart which shows the breakdown of fabrics in the finds which I hope will make the understanding of the distribution maps clearer. I have also included computer reconstructions of some of the pottery with the objective of making the information more accessible to the general reader.