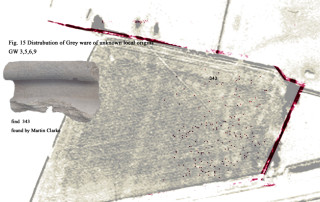 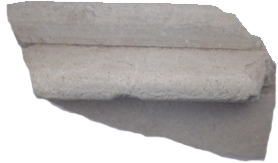 As with most Roman sites, Greyware shards form the largest proportion of the Easthorpe assemblage. These wares started to be mass produced c.AD70 to replace the Calcite-gritted Shelly wares which were softer. Greyware became the dominant fabric of common domestic pottery. It is difficult to pick out distinctive fabrics from the mass of wares which were produced, but it is known that the Lincolnshire kiln-sites of Dragonby, Lea, and Norh Hykeham produced it as did kilns in Leicester. Greyware was produced throughout the Roman period but the proportion of Greyware in relation to other fabrics seems to have declined in the Fourth century.

In this assemblage the proportion of common domestic Greyware to other fabrics is quite high which tends to support the theory that the site was low status. There is an alignment of finds in the centre left of the field which does not seem to be associated with cropmarks (this line is also present in fig 9 the Calcite-gritted Shelly wares distribution). However, this alignment could be the result of medieval ploughing.