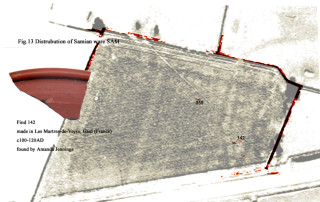 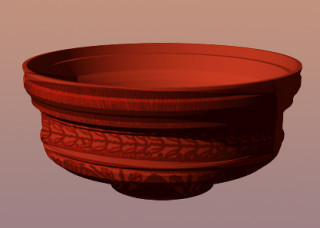 The identification report by Dr Richard Pollard on find 358 describes it as a “shard of South Gaulish samian ware from Dragendorff 29. This was made from the reign of Tiberius to c.AD 85. In this region the shard is likely to date to c.50-85AD” .

Samian ware was the luxury ware of the early Roman Empire. The ware was called after the Greek island of Samos and the Latin word samiare for polish. Samian was imported after the conquest in large amounts particularly from potteries at La Graufesesenque (the modem Aveyron) in Southern Gaul (France). Because of its high quality, Samian has been more comprehensively studied than any other form of Roman ware making it possible to date individual finds quite accurately.

The presence of this shard shows that the community at Easthorpe was in contact with the Romans from the very early days of the conquest, perhaps with the Roman fort of Margidunum which was built on the Fosse Way at Bingham, 7 miles west of Easthorpe, ca.AD 55-60 .

Find 142 shown on Fig.13 is part of a cup which dates from AD100-120 and which was made at Les Martres-de-Veyre in Central Gaul whose potters captured the Samian market after AD 100. The 1% overall percentage of Samian finds in the assemblage from Easthorpe is low in comparison with other Roman sites, and it may suggest the this site was a farmstead rather than a more high status villa or small township, but recent discoveries of Iron working slags suggest it may have had an industrial function. However, set against this theory is the fact that although they were a very low proportion of the finds, the fine wares from Easthorpe were of very high quality.