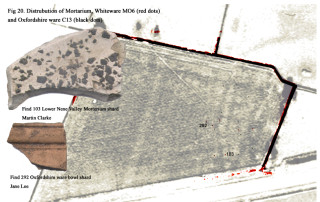 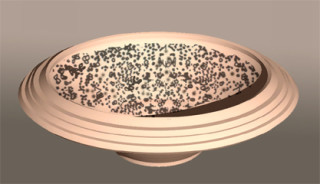 Fig 21. Computer reconstruction of find 103, a Mortaria from the LowerNeneValley, c.2nd-4th centuries, found by Martin Clarke.

The above illustration shows one of the most characteristic Roman kitchenware ceramic products, the mortaria, a large vessel which was lined with grit (or in this case iron stone) that was used to grind spices and herbs for food preparation 11 . Very few mortarium shards were recovered from the Easthorpe fieldwalk (indeed the four shards found may have all belonged to the vessel shown above) and no mortarium shards were found at all during the Bottesford Bypass II dig. The relative scarcity of these shards is further evidence of a low status site.

Find 292 on Fig 20 shows a shard from a bowl made in Oxfordshire fabric C13. This was a ware that was extensively distributed in the south during the third century. However its distribution expanded into the Midlands and intensified during the fourth century, after capturing much of the market from LowerNeneValley colour-coated C3 12 . The Oxfordshire shards from Easthorpe are likely therefore to date from the Fourth century and their association with the `railway track’ crop marks suggest that this feature may have been utilised toward the end of the Roman period.