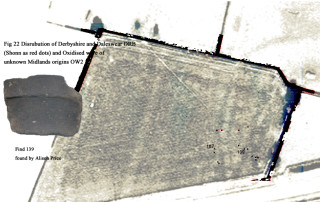 The workshops which began making the vessels known as Derbyshire Ware began working around AD 120. They increased their scope later in the second century and by the third century won a small market in central England and with the northern garrisons. This ware is abundant in Derbyshire, but shards from Easthorpe together with some found at Goadby Marwood are on the very eastern edge of its distribution range. Also on the edge of its distribution, but this time on the southern edge, were finds such no.139 which is an example of a fabric called Dalesware, a type of pottery more commonly found in North Lincolnshire, Humberside and South Yorkshire. This ware emerged in the late second century and was mass produced between AD250­-340.

OW2 as the name implies are sandy coloured shards from unknown sources. Examples of a similar 3rd-4th century fabric from Much Hadham in Hertfordshire have been also found at Goadby Marwood.