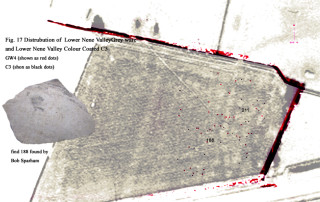 Pottery factories working on a very large scale opened in the NeneValley around AD 150 centred on the town of Durobrivae , now Walter Newton, near Peterborough. Greyware 4 which was lighter in colour and thickness than other Greywares was the first product. A range of coarse-ware jars and bowls were produced of which 53 shards were found at Easthorpe.

However, in addition to coarse-ware, a range of colour – coated tablewares (which are now classified as C3) was also produced, probably by immigrant potters from the Lower Rhineland. This tableware was in a wide range of forms including jugs, flagons and bottles, imitation Samian forms and cups and beakers 10. 35 shards of C3 colour-coated ware were found at Easthorpe, 7% of the assemblage. This proportion is low in comparison to other sites, but it follows what may be described as the Easthorpe pattern of being nonetheless of high quality.