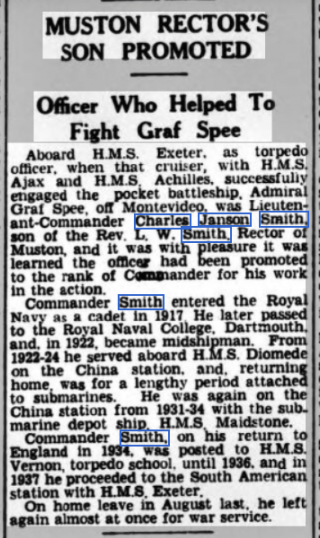 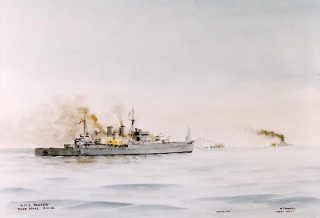 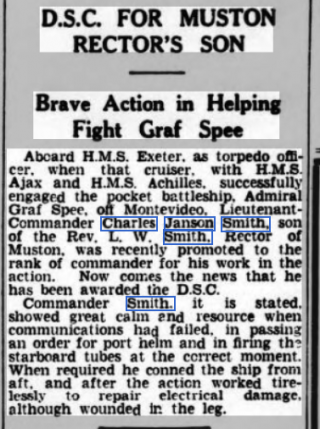 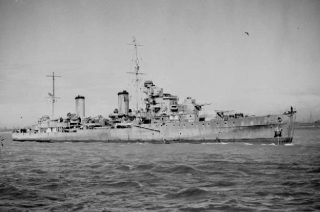 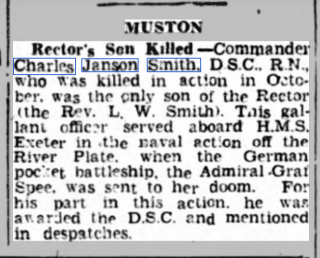 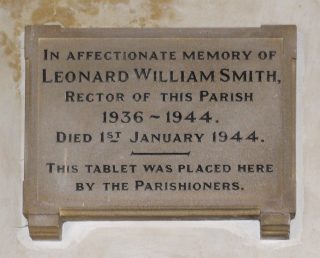 Commander Smith died when his ship, the light-cruiser HMS Aurora was bombed in the Eastern Mediterranean on the 30th October, 1943.

Charles Janson Smith is commemorated on the war memorial in the churchyard at St John the Baptist parish church, Muston.

He enrolled in the navy on the 15th September, 1917, and worked his way through the ranks during a career of some twenty six years. His service record card covering the years 1922-1931 indicate that he was hard working and well thought of as he gained experience: Midshipman in 1922, Acting Sub-Lieutenant May 1924, Sub-Lieutenant September 1924, Lieutenant in December 1925. The record sheet also gives his home address in 1927 as the Vicarage, Wellington, Maidstone, Kent. He was recorded as an Absent Voter in 1931 at The Vicarage, Willington, Maidstone, and as Lieutenant, Royal Navy, HMS Vernon. The Vicarage was probably where his parents lived, Leonard being a clergyman in Maidstone at this time.

In December, 1939, he was aboard HMS Exeter in the ‘Battle of the River Plate’, for which he was promoted to Commander and awarded the Distinguished Service Cross. In this, the German Pocket Battleship was attacked by three Royal Navy cruisers, HMS’s Exeter, Ajax and Achilles. Exeter was serverely damaged and forced to retire, but their quarry had to take refuge in the harbour at Montevideo, Uruguay, and was scuttled.

Commander Smith was killed four years later while aboard HMS Aurora in the Eastern Mediterranean on the 30th October, 1943, aged 39. HMS Aurora was a Light-Cruiser launched in 1936. It is recorded that on this date the Aurora was attacked by German aircraft and was hit by a 500 kg bomb aft of the funnel, causing considerable damage. 47 of those aboard were killed, and a further 3 wounded (naval.history.net). After a distinguished career through the Second World War, HMS Aurora was sold to the Republic of China in 1948 and remained in service until she was scrapped during the Cultural Revolution. There is a memorial to HMS Aurora located at Whale Island, Portsmouth

Charles Janson Smith was born on the 26th March,1904, in Battle, Sussex. His mother’s maiden name was Holt.

His father Leonard W. Smith, born in 1872 at Clapton, Middlesex, became Rector of Muston in 1936 and stayed until his death on the 2nd January 1944. In the national register of 1939, he is recorded as a widower, with chauffuer, housekeeper and domestic servant, at Muston Rectory. He was son of Reverend John R. Smith, who came originally from Birmingham, born in 1842. His mother had died before 1891, by which date the family consisting of father, two daughters (Margaret, aged 17, and Emily, aged 12)  and two sons (Leonard, aged 19, studying at Oxford and Norman, aged 7), were living in Hastings. In 1901, after his time at Oxford, Leonard Smith was practicing as a solicitor in Battle, Sussex, living on his own. He was married in the following year, 1902, to Annie Marie Holt, who was born 1879 in Battle.

Unfortunately, further details of Leonard and Annie’s life have been located, though as already noted, it is probable that they had lived at Willington Vicarage, Maidstone, in the early 1930s, where Leonard Smith was probably a clergyman.