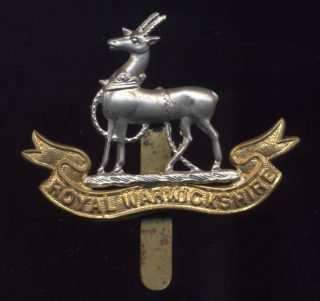 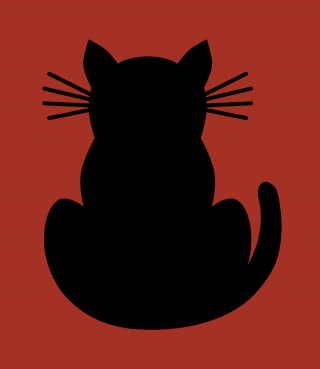 The Black Cat insignia of the 56th (London) Division in the Second World War, based on the legend of Dick Whittington.
Wikipedia 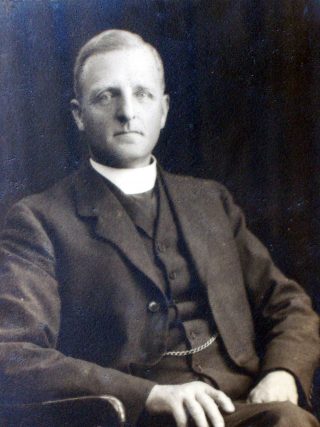 Richard Edward Walford’s name is one of those on Bottesford War Memorial. He is also comemorated by an inscription added to his parents’ memorial in the chancel of St Mary the Virgin parish church in Bottesford: son Richard Royal Warks Regiment serving with 2nd/6th Queens Regt at Calvi Veccia, buried at Naples, died 20th October 1943.

Richard Walford was born in 1917 when his family lived at Cotmanhay, near Ilkeston, Derbyshire, where his father was the parish priest. The second of three sons, he followed his brother, Humphrey, in chosing a military career. He joined the Royal Warwickshire Regiment, service no. 74608, but was attached at some point to the 2/6th Battalion of the Queen’s Royal (West Surrey) Regiment with which he was serving when he lost his life in 1943. We do not know the date he first enlisted, but it is unlikely to have been before 1935, when he turned eighteen, implying that in his army career of eight years at most he rose to the rank of major. The inscription on parents’ memorial plaque names the location of his death as Calvi Vecchia (mis-spelt ‘Veccia’ on the inscription), a village within the community of Calvi Risorta, in Campania, north of Naples.

Records provided by the Queen’s Royal West Surrey regiment website inform us that in 1938 the six Queen’s West Surrey Territorial battalions were formed into two brigades; 131 (Queen’s) Brigade consisted of 1/5th, 1/6th and 1/7th Queen’s; and 169 (Queen’s) Brigade made up of 2/5th, 2/6th and 2/7th Queen’s (Richard Walford was thus attached to 169 Brigade). All six Territorial battalions fought in France in 1940. Two years later, the two brigades joined the Eighth Army in the Western Desert. 131 Brigade became the Lorried Infantry brigade of 7 Armoured Division (the “Desert Rats”) after El Alamein: 169 Brigade joined 56 London Division (the “Black Cats”) and took part in the capture of Tunis in May 1943. Both brigades fought in the allied landing at Salerno in September 1943; one relieving the other. They then took part in some of the bloodiest fighting in Italy. When the Battle Honours were awarded for the Second World War, seventeen were awarded to the Queen’s. “Salerno”, “Monte Camino”, “Anzio”, “Gemmano Ridge” emblazoned on the Queen’s Colour, whilst “Monte Stella”, “Scafati Bridge”, “Volturno Crossing”, “Garigliano Crossing”, “Damiano”, “Gothic Line”, “Senio Pocket”, “Senio Floodbank”, “Cusa Fabri Ridge”, “Menate”, “Filo”, “Argento Gap” and “Italy 1943-45” were awarded as Battle Honours.

It seems probable that Richard Walford had been with 169 Brigade in France and then, as part of the 56th Division, through the campaign in North Africa, the landing at Salerno and the Italian campaign up to the taking of Naples. After crossing the Volturno in October 1943, the division entered the town of Calvi Vecchia.

G.I. Joe  – An account published by Wikipedia tells a poignant story: “During the early stages of the Italian Campaign of World War II, war pigeon “G.I. Joe” saved the lives of the inhabitants of the village and of the British troops occupying it. The village was scheduled to be bombarded by the Allied forces on 18 October 1943, but the message that the British had captured the village, delivered by G.I. Joe, arrived just in time to avoid the bombing. Over a thousand people, soldiers and civilians, were saved.” Air support had been previously requested against German positions at Calvi Vecchia on 18 October 1943. However, the 169th Brigade won back the village ahead of schedule, but were unable to transmit a message via radio to call off the planned American air raid. Pigeon “G.I. Joe” was dispatched as a last resort and arrived in the air base just in time to avoid the Allied air force from bombing their own men. It had flown the 20-mile distance in 20 minutes, arriving just as the planes were preparing to take off. In 1946, G.I. Joe was presented the Dickin Medal for gallantry (the equivalent of the Victoria Cross for animals) by Major-General Keightley at the Tower of London for “the most outstanding flight made by a United States Army homing pigeon in World War II”, the 29th recipient of the medal. In 2019, G.I. Joe was also posthumously awarded the posthumously awarded the Animals in War & Peace Medal of Bravery.

Nevertheless, despite this close escape, Major Walford was killed only two days later. We have no details of what happened, though the position close to the German line must have been perilous.

His father was Frank Walford, Rector of Bottesford, who was born in 1875 at Fyfield, near Abingdon, Berkshire, son of Thomas W. Walford 33, an organist and music master born in 1848 at Oxford, and Amelia Walford, born in 1845, also in Oxfordshire. In 1891, Frank Walford was one of four pupils boarding with Edward Ebenezer Crake, Rector of Jevington, and wife Elizabeth, on High St, Jevington, Eastbourne. In 1901 he was a Student at the Theological College at Lichfield. By 1911, Frank Walford was a Clerk in Holy Orders, living at The Vicarage, Cotmanhay, Ilkeston, with his wife Dorothy Beatrice Jeffreys Walford (nee Nicholls). They had married in April, 1910, at Trowell. Kelly’s Directory records that F. Walford of Trinity, Dublin, first took up residence in the vicarage, Cotmanhay, in 1907. Dorothy was a daughter of the Reverend R.J.E. Nicholls, who had been rector of Knipton and Saxelbye before he retired in 1932, and died in 1935 while staying with his daughter and son-in-law at Bottesford Rectory.

Two of their sons, Humphrey (b.1912) and Richard (b.1917), were both born at Cotmanhay, but electors registers indicate that by 1921 the family was at The Rectory Bottesford.The third son, Nicholas Thomas, born in 1912 at Cotmanhay, followed his father into the ministry, becoming a clergyman. Records kept at Bottesford church indicate that Frank Walford had become Rector in 1918, following the resignation in 1917 of Reverend William Vincent-Jackson whose son, Montagu John Vincent-Jackson, was killed in action in the 1st World War. Canon Frank Walford remained Rector of Bottesford for twenty five years, until his death in 1943. The caption to his photograph in Bottesford church reads: Canon Frank Walford (1918 – 1943), a tall gaunt man, who died on Easter Day in 1943. Two of his three sons went into the Army. One, Major Richard Walford, was killed: his name is on the War Memorial in the Church. The third son followed his father in to the ministry. He helped his father with the Easter Day morning communion, and in the afternoon his father died. In his memory, the sheltered housing development between Queen Street and Albert Street, built in the 1980s, was called Walford Close.

Canon Walford died on Easter Sunday in 1943 and was buried at Bottesford, aged, 67. Dorothy Walford died less than a year later, and was buried beside her husband on the 12th February, 1944. His parents, Thomas William (1847-1927) and Amelia (1844-1928) are also buried together in Bottesford churchyard.

On the 6th April 1935 the Grantham Journal reported that a quarter peel of Grandsire-Triples, “1260 changes in 52 minutes”, was rung at Bottesford as a birthday tribute to the Rector’s eldest son, who had been serving in India for three years with the Artillery and was arriving home from Tilbury on leave. There is also a record of him travelling back to Bombay, sailing from London on the 4th October.