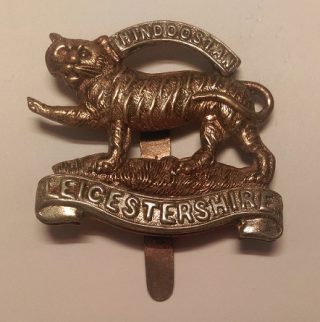 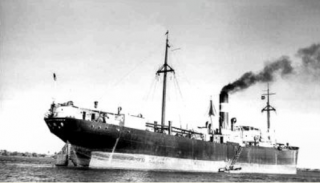 A picture of the Hohuku Maru. 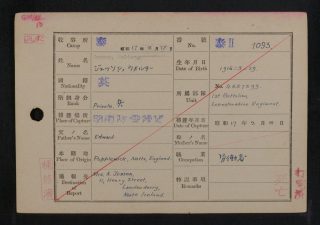 Private Jesson was drowned when aboard a PoW transport sunk by Allied air attack off the Philipines in 1944, having already survived two years in captivity in Thailand.

Walter Jesson was born in Papplewick, a village midway between Nottingham and Mansfield, on the 29 March 1916. His parents were Edward Jesson, a farm worker and grazier, and Mary Elizabeth, nee Bembridge. Edward and Mary had married  in Grantham district in 1903, and had at least children – William H in 1904, Edith Emily (1905), Esther (1908), Arthur Edward (1909), Frederick John (1911) and finally Walter. Edward moved from farm to farm, being recorded in 1901 as a batchelor horseman boarding at Ogden’s farm at Belton, near Grantham, then in 1911 at Silk Willoughby, near Sleaford, where he and his wife had four children at home: their sons Frederick and Walter were born later. They moved to Bottesford (date uncertain), and in 1939 Edward Jesson was a ‘grazier and dairy farmer’ who, with Mary and Frederick, lived on Barkestone Lane. Mary Elizabeth Jesson died in Bottesford on the 14th February, 1940, aged 61, during the winter of that year, and was buried in Bottesford churchyard. Edward died in Bottesford on the 20th November, 1956, and was buried alongside his wife. Their tombstones carries the inscription “also Pte Walter Jesson d.POW in Japanese hands, WW2”. Another of their children, Esther Jesson, was buried close by on the 4th January 1977, aged 68.

Walter joined the 1st Battalion of the Royal Leicestershire Regiment, the Tigers, on the 29 March 1934 and would soon have been posted to India where the battalion served for most of that decade. He served as a Private with service number 4857399. Images of the Tigers on duty and at play in India came to light in a photograph album found in 2017 and now available to view at this link on Flickr. Walter had not been identified on the photographs but must be in some of the parade scenes.
Walter Jesson married Annie Hamilton, a Northern Irish girl, though a register record has not been found in the NI or English records, suggesting that they may have married in India or on another posting, though it is also possible that it took place whilst he was on home leave.
The history of the 1st Battalion, Leicestershire Regiment, is set out in The Royal Leicestershire Regiment website:

from which this summary has been taken: 1st Battalion remained in India until February 1941 when it moved to Penang. In May it sailed for the mainland of Malaya and was stationed at Sungei Patani. When Japan declared war on 7 December 1941, the Battalion was in position at Jitra. On the night of the 10/11 December contact was made with the enemy and from then on the Battalion was continually in action until the final surrender of Singapore in February 1942. During this time the Battalion fought hard and well against a little known enemy. Groups of men were continually being cut off, but in most cases fought their way back to the main body. Due to heavy casualties in both Battalions, on 20 December 1st Battalion amalgamated with the 2nd Battalion The East Surrey Regiment to form the famous British Battalion. Actions which will always be remembered were fought at Jitra, Kampar, Bata-Pa-Hat and Gurun Road. When the British Commonwealth Forces in Singapore surrendered to the Japanese in February 1942, men of The British Battalion became prisoners of war until 1945.

Private Walter Jesson was captured on the 15th February, 1942, when the Japanese invaded Singapore, and was sent to Thailand to work on the Burma-Thailand railway. Information regarding his captivity has been found from Japanese records and Red Cross lists. The first news back to UK would have been army messages that he was missing and then, thanks to liaison arranged by the Red Cross, updates to say he was a PoW. It was a massive task to try to mediate across language barriers, confused and mis-recorded information, and the sheer weight of numbers involved. Walter’s data was one of the records that became confused, with his serial number mis-transcribed on some lists.
Nevertheless, we know that on the 17th August, 1942, he was at Camp 4 in Thailand, according to his Japanese record card. His home contact for information and his mailing card was Mrs A Jesson, 11 Henry Street, Londonderry, North Ireland.
In 1944, he was one of some two hundred prisoners transferred on board the cargo ship Hohuku Maru  which was to sail to the Phillipines, from where he would have been moved on to internment in Japan. Originally built in 1918 and named the Hofuku Maru, she had been re-registered in 1938 and in September 1944 was one of a small convoy of eleven ships sailing off the main island of the Philipines. On the 21st September 1944 they were attacked by American aircraft, and all eleven ships were sunk.

Detail of the ship and its tragic sinking are provided by the ‘wrecksite’ website (https://www.wrecksite.eu/wreck.aspx?59634), which lists all the men on board, including Private Jesson. The ‘wrecksite’ post also includes the following brief account by Tony Allen (2008): Hofuku Maru SS was a Japanese transport carrying 1,289 prisoners-of-war en route from Singapore to Japan was attacked and sunk by US torpedo carrying bombers. Loaded with British and Dutch POW´s, it stopped at Manila to unload the sick and dying. It sailed again in convoy Mata-27 and was attacked for the second time about eighty miles north of Corregidor when only three days out. It took only a few minutes for the ship to go down drowning around 1,047 men who were trapped in the holds. Less than 250 survived.

Walter Jesson is remembered on Column 65 of the Singapore War Memorial at Kranji in Singapore. The inscription includes ‘Son of Edward and Polly Jesson; husband of Annie Jesson, of Londonderry, Northern Ireland’.


It appears that Annie Jesson was pregnant when Walter left her to go back to war, and that she had their son David whilst her husband was away. We do not know if Walter was even aware that he had a son.

More information about the sinking of the Hohuku Maru can be found on the Lakenheath Remembers website set up to comemorate the death of Stanley Mackender (Private, Norfolk Regiment), another of the PoWs on board.