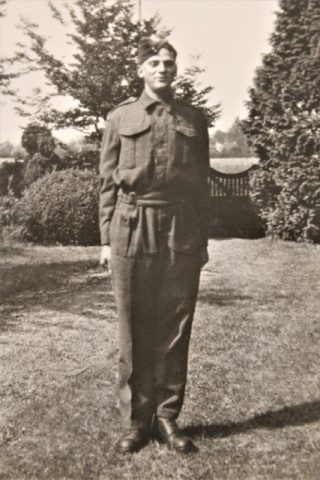 Ian Lennard Mould in uniform at the family home in Easthorpe, before he left with his regiment for the D-day landings.
From the Mould family archive. 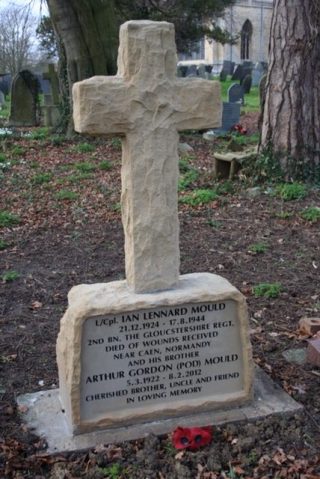 The grave of L-Cpl Ian Lennard Mould and his brother Arthur Gordon Mould in Bottesford Church Yard. This is a Commonwealth War Grave.
From the Mould family archive.

We are grateful to Ian Mould, nephew of Ian Lennard Mould, for providing most of the information as well as the photographs displayed in this page.

Ian Mould was born in Peaslake, near Guildford, on the 21st December 1924, the third of four children of Reginald and Katherine Mould, whose family home was Three Gables, manor Road, Muston, from the 1930s until after 2000. His father Reginald Cecil Mould had served as a Captain in the Leicestershires in the First World War, and his brother also named Reginald served as a senior officer in the Leicestershires in the Second World War.

Ian Lennard Mould tragically lost his life aged just 19, on the 17th August, 1944, after being injured near Caen in Normandy, following the D-day Landings. He was a Lance-Corporal in the 2nd Battalion, Gloucestershire Regiment.

Ian signed up to fight in WW2 (precise date unknown) and joined the 2nd Battalion Gloucestershire Regiment, being made into a Lance-Corporal, service number 14419262. He took part in the D-day landings on 6th June 1944.  Having survived the landings, he was seriously wounded while fighting near Caen, France, on the 11th August 1944 and was immediately shipped back to the UK to a hospital in Southampton on 15th August 1944.  The next day (16th August 1944), he was moved to Basingstoke Hospital.  He died there on 17th August 1944.

Ian’s funeral took place at Bottesford Church on 21st August, 1944, and he was buried in the Cemetery there. His resting place, in Bottesford churchyard, is a Commonwealth War Grave.

We can add that L-Cpl Mould’s elder brother Reginald Alan Barrett Mould also served in the army in the Second World War. Joining as Private 6826955 on the 2nd September 1939, he was appointed 2nd Lieutenant in the Leicestershire Regiment on the 9th March 1940, gained the rank of Captain on the 8th October, 1941, and later that of Major. He was baptised on the 20th March, 1919, died on the 6th August 1994, aged 75, and was buried at Bottesford with his wife, Pamela Irene Kipling, who died “at Fyvie” in Scotland on the 3rd August 1981, aged 58.

Died of injuries received during fighting near Caen on the 11th August, 1944.
Served in
Gloucestershire Regiment (1)