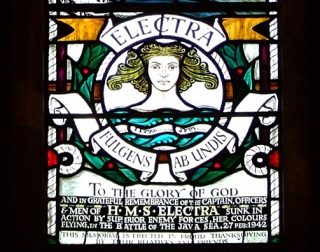 Part of the memorial window at St Georges Chapel, Chatham: "The window recalls the sinking of HMS Electra during the Battle of the Java Sea in 1942. It commemorates 119 crew lost when she sank with all colours flying."
warmemorials online website

Frederick Bert Turner served in the Royal Navy in the Second World War as Stoker Petty Officer C/K 65698. He died when his ship HMS Electra was sunk on the 27th February, 1942, in the Battle of the Java Sea, with the loss of 119 men. He was 37 years old, and left his wife Elizabeth and family. He is commemorated on Panel 61.1, Chatham War Memorial: the inscription adds “son of Alice May Turner; husband of Elizabeth Turner, of Rosyth, Fife”. A stained glass memorial window commemorating the Electra was created in St George’s Chapel, Chatham, in 1947.


Frederick Bert Turner and his twin brother Edward Aubrey Turner were born on the 14 January 1904, with the births registered in Grantham. Their parents were Thomas Turner, a policeman, and Alice Maude Turner whose maiden name was Saunders.

Thomas Turner, his father, was born in 1878 in Grantham and in 1881 was at 16 Blue Gate, the home of his widowed grandfather Edward Turner, a cabinet maker, and his family. In 1897, aged 19, he attested and joined the Coldstream Guards as Private 11878. He served in South Africa from 21/10/1899 to 20/7/1902; was awarded the Kings Medal with clasps, and the South African War Medal with clasps. He was finally discharge from the Reserves on November 1909, having become a civilian policeman. His service record confirms that his father (Frederick Bert’s paternal grandfather) was Thomas Turner of 16 Blue Gate. It also confirms that he married Alice Maude Saunders, spinster, at Grantham Registry Office on the 4th November, 1903.

Bert and Aubrey were taken in  by their maternal grandparents, Frederick and Ellen Saunders, presumably because their father was posted around the country on police duties and felt unable to provide a stable home. In the 1911 census, Frederick and Ellen’s address was 232 Harrowby Road, Grantham. Frederick Saunders had served in the Royal Marines and retired to New Somerby (initially at 53 Cecil Street, New Somerby) where he served as the verger at a local church. At that time the twins’ parents were living in Hanley, North Staffordshire. Thomas must have been posted there a couple of years after the boys were born as their two younger siblings, Thomas Horace and Percy Douglas, had been born in Hanley in 1907 and 1909. Thomas and Alice had further children in Hanley, Alfred Leslie in 1912 and a daughter Dora in 1914, but it is unclear how often Bert and Aubrey would have spent time with their brothers and sister.

In 1925, the electoral roll lists show Bert as an absentee voter at Chapel Street, Bottesford, this being presumably his permanent shore address while serving in the Royal Navy. In fact, he was recorded on the rolls each year from 1925 to 1931 as the sole voter in one of the terraced houses making up the close known as Retford’s Cottages (demolished in the 1960s) which opened off Chapel Street (behind Dyer’s Cottage, No.7 Chapel St). By 1931, his aunt Rosetta (Rose) and her husband Harry Tinkler lived in another of the cottages.

The Grantham Journal published an obituary commemorating Aubrey and Bert’s grandmother, Ellen Saunders, in 1924. It refers to their grandfather as Sergeant F. Saunders (late Royal Marines). It stated that the family came to live in Bottesford some 12 years previously, prior to which they lived at Harrowby Road, Grantham. This indicates that they moved to Bottesford c.1912.

Grandfather Frederick Saunders died in 1939, aged 84, and was buried on the 20th September at Bottesford. His obituary (Grantham Journal, 23rd September, 1939) stated that he had resided at The Nook, Bottesford. However, Mr Ian Norris of Bottesford remembered (c.2014) that the family came to Bottesford when they moved from Harrowby Road, adding that they lived in a cottage in Standley’s Yard, a terrace (since demolished) at the eastern end of High Street.

We can conclude that Bert was brought up in Bottesford by his grandparents, and then stayed on until he joined the Navy in 1925, when aged 21. Before that he worked as a bricklayer around Grantham.

Frederick Saunders was a Private in the Royal Marines. He enlisted at Taunton 6th June 1873, and remained in the service for seventeen years until 1894. While in the Marines, he married Ellen Shorney in St Pauls Chapel, Chatham, on the 16th March 1882. She was twenty years old, daughter of Charles Shorney, a carpenter. Their daughters Alice Maude (Bert Turner’s mother) and Rose were born in Chatham.

Thomas Turner had served as a Private with the Coldstream Guards during the Boer Wars in South Africa. He was born 1878 in Grantham, and brought up in the home of his widowed grandfather Edward Turner 50 a cabinet maker at 16, Blue Gate. In 1897, he attested and joined the Guards as Private 11878. He was in South Africa from October 1899 to July 1902, awarded the Kings Medal with clasps and the South African War Medal with clasps, with mention of Belmont, Modder River, Paardeberg, Dreifontein, Johannesburg and Diamond Hill. He transferred to the Army Reserve on returning to England in 1902, and finally discharged in 1909.

The service record of Frederick Saunders (junior) has proved problematic, in that it has not as yet been possible to determine which of the many men with this name who fought in the First World War is him, but we know from village records that he did serve in that dreadful war.

In 1925, Bert Turner opted to join the Royal Navy as a stoker. He signed on for 12 years service on 26 February 1925 and started training at the HMS Pembroke shore establishment at Chatham, commencing as a Stoker 2nd Class. After time at Greenwich and HMS Egmont (Fort St Angelo) in Malta he was made Stoker 1st Class on 22 December 1925. Pembroke II and Egmont II were administrative centres that would have been where Frederick’s pay was administered. Whilst attached to them he would have served aboard various ships sailing from Chatham and Malta, as part of the Home and Mediterranean fleets. His first ship was HMS Wryneck.

The ships may not all be listed on his service records that are still available in archives, but from 1929 he is recorded on HMS Wakeful, HMS Wolfhound, HMS Walpole, HMS Ramilles, HMS Repulse, HMS Renown, HMS Kent and HMS Intrepid. Whilst on the Repulse in 1932 he was made Acting Stoker Petty Officer and that was made his full rank when he served on the Renown in April 1933. His service record shows Character always rated Very Good and Attitude always Satisfactory or Superior. In 1935, as his 12 year service period neared completion, he volunteered to stay on in the Navy indefinitely.

Frederick Bert Turner married Elizabeth Caithness Watson, 24, of 23 South St, Cowdenbeath, on the 18th April 1930 at Guthrie Church, Cowdenbeath, Fife. Presumably they had met whilst his vessel at that time, HMS Walpole, was in port at Rosyth Naval Dockyard. Elizabeth was a weaver in a silk factory, the daughter of a widower music teacher named William Watson. In 1931 they had their first child, Thomas, and in 1932 they had a daughter Isabella Watson Turner, but she died early in 1933. They went on to have two more children, William Watson Turner who lived until 2007 and Betty Alice Turner who died in 1968. They both married and lived in the Dunfermline area. 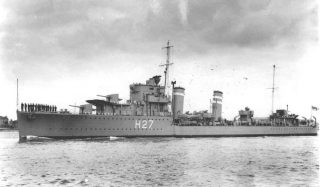 As the political maneuvering in anticipation of a war with Germany took place in the spring of 1939, Frederick was assigned to the Drake 4 accounting centre and joined the crew of HMS Electra. The following April his payroll was managed from the HMS Tyne shore base, but he remained serving on HMS Electra.

HMS Electra was an E-Class destroyer built by Hawthorn Leslie Shipyard, Hebburn, Tyneside and launched in 1934. She was a classic workhorse destroyer in the navy with several notable events in her battle history. She rescued survivors from the SS Athenia, the first British vessel sunk in WW2 by a German U-Boat in September 1939. In 1940 Electra was assigned to convoy duties and supported raids on German forces around Norway. HMS Electra served in the Battle of the Denmark Strait, hunting the Bismark, and after the sinking of HMS Hood having the sad honour of rescuing the only three survivors from that great loss. She served in the Mediterranean and was then posted to the Asia fleet, picking up survivors from the sinking of the Prince of Wales and Repulse by the Japanese torpedo bombers. Soon afterwards, the Battle of the Java Sea was an attempt by the RN and Dutch Navies to prevent Japan from landing on Java. They were outgunned, the Dutch Rear-Admiral Karel Doorman was killed. It was a disastrous defeat for the Allied Navy at the hand of the Imperial Japanese Navy. Electra was sunk by the light-cruiser Jintsu whilst trying to cover the escape of the damaged cruiser HMS Exeter.  Of the Electra’s compliment, 119 crew were lost in the sinking and 54 picked up by a submarine and transferred to Surabaya. However several of those were captured when the ship carrying them home to the UK was attacked by a German raider and many of the survivors ended up as prisoners of the Japanese. 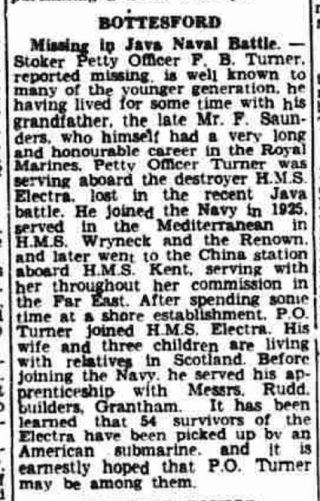 Frederick Bert Turner died on 27 February 1942 when HMS Electra was sunk. He is commemorated on panel 61.1 of the Chatham War Memorial, inscription “son of Alice May Turner; husband of Elizabeth Turner, of Rosyth, Fife”.

On 29th March 1947, a stained glass window at St George’s Chapel at the RN Barracks at Chatham was dedicated to the crew of HMS Electra.

Frederick’s widow Elizabeth lived on in Rosyth after the War, recorded in the Fife electoral roll for 1960 at 47 Kings Crescent, with her daughter Betty (who married later that year) and son William and his wife Jean. Elizabeth died in 1986.

In 1959 the most senior surviving officer from the Electra, Lieutenant-Commander T. J. Cain – who fired her torpedoes during her last desperate battle – wrote a book telling the tale of a tough and dutiful ship.

Lt Cdr Mason recorded the history of HMS Electra from 1939 to her loss in 1942. The following extract describes events from February 1942 leading up to the fatal 27th:

3rd          Towed HM Destroyer ISIS to Java. Has been under repair at Singapore. Returned to Singapore on completion of tow.

27th        Deployed in unsuccessful search with ABDA ships for invasion ships. During return passage enemy ships reported and deployed to intercept. In action with Japanese cruiser JINTSU and destroyers. Engaged Japanese destroyer ASAGUMA and obtained hits. Hit by 5in return fire whilst making torpedo attack and caught fire. Ship disabled and sank rapidly with the loss of 108 of her ship’s company. 54 survivors ware rescued by US submarine USS S38 and taken to Java. (Note: 7 of those rescued later died leaving only 42 from 178 on board. Further details of war service are in available in T. J. Cain’s book HMS ELECTRA (Mailer 1959). See also THE FORGOTTEN FLEET by J Winton and WAR WITH JAPAN (HMSO).

Further extensive details can be found on:

His name is recorded on the War Memorial in St Mary's parish church, Bottesford, as F Bertram Turner, though his birth middle name was registered as Bert. His mother's middle name is recorded as May on his memorial at Chatham, though she was actually Alice Maud.
Served in
HMS Electra (1)
Royal Navy (6)