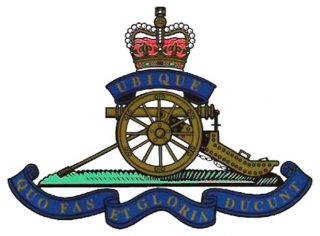 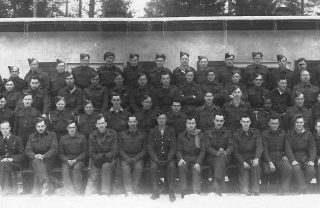 British and Allied surgical patients at Stalag 344, February 1944. This is an un-named group of inmates, and it is not likely that Gunner Philpotts is one of them.
Wikipedia: contributed anonymously by "CharlesC", probably Sergaent Charles Coward.

Victory in Europe Day, May 8th, 1945, marked the formal acceptance by the Allies of Germany’s unconditional surrender, the end of World War II in Europe. Allied Prisoners of War held in Europe were liberated and brought home to a hero’s welcome, some with little delay. Only ten days after VE Day, on the 18th May the British Legion in Bottesford had been able to welcome back its Chairman, Captain Wright (Grantham Journal).

Two months later, on the 20th July 1945, the Journal described a function on the Rectory lawn in Bottesford at which Canon A.T.G. Blackmore gave an address, A Real Welcome Home From The Church at Bottesford to Four Prisoners of War. The four were: Private Ernest Greasley (Border Regiment) taken captive at Arnhem; Gunner Fred Greasley, captured at Tobruk; Gunner Ernest H. Philpotts, taken prisoner in Crete; Captain A.C. Wright, captured in France just after Dunkirk.

These men were soldiers who had been captured in the thick of battle. They had survived the fighting and also their incarceration in POW camps for prolonged lengths of time. This post is devoted to the memory of one of the four, Gunner Philpotts, captured in May or early June 1941 and then held until the end of the war.

Ernest Huckerby Philpotts was born in the 3rd quarter of 1919 at Holbeck, Yorkshire.

His father, James Huckerby Philpotts, was born in 1880 at Hose in the Vale of Belvoir, son of Benjamin and Fanny. In the 1891 census, we find James and younger brother Tom living with their widowed father Benjamin Philpotts, a 43 year old railway labourer originally from Herefordshire. The address was Hose, Melton Mowbray. However, James left home to take up railway employment. In 1911 he was boarding, 30 years old, at work as a “shunter” (driving a shunting engine), at the home of train guard Henry Saint (born in Agra, India) and his family in New Wortley, Armley & Bramley, West Riding. In 1915, James Philpotts married Florence Ethel Caswell at Middlesborough, North Yorkshire. She was born in 1894 at Hockerill, Herefordshire. In 1921, the electors register records that James and Florence lived at 32 Rydall Street, Holbeck, presumably the address where Ernest was born.

In the 1939 Register, Ernest Philpotts was listed as an unmarried painter and decorator living with his parents James H. (a railway crossing keeper, some 59 years old) and Florence Philpotts, at the Normanton Crossing, Bottesford.

James H Philpotts died in 1952 aged 72, buried on the 28th October at Bottesford. Florence Ethel also died in Bottesford where she was buried on the 24th February 1969 alongside her husband.

After returning to civilian life, in 1950, Ernest Philpotts married Lorna Ainsworth at St Andrews, Swanswick, Derbyshire. They probably never settled back in Bottesford. He died on the 10th March 1999 in Liverpool, aged 80.

Ernest H. Philpotts attested in 1939 and joined the Royal Regiment of Artillery with service number 962990.

Gunner Philpotts was captured during the Battle of Crete, which lasted from the 20th May to the 1st June 1941, the first mainly airborne invasion in military history (Wikipedia). The Allies were forced to retreat, suffering over 3,500 casualties and 12,254 captured.

Gunner Ernest Philpotts is on the Prisoners-of-War 1715-1945 list hosted by Find My Past (and other websites?). FMP explains that, ‘This collection of records from The National Archives includes papers from the Foreign Office, Colonial Office, War Office, Admiralty and Air Force. This is not a comprehensive list of every prisoner of war. There are additional transcript only records available in this collection from Naval and Military Press and transcripts created by Brian Sims’.

This undated record indicates that Gunner Philpotts was held as a prisoner-of-war number 24001 at German POW Camp 344. After being captured, he had been transported to Germany and was being held in Stalag 344, formerly known as Stalag VIII-B, near the small town of Lamsdorf (now Lambinowice), located in Silesia in what is now part of the Czech Republic. The Grantham Journal reported, on August 8th 1941, that he had written to his parents, stating that he was a POW and wounded, adding that he was recovering from his wounds and had no complaint of his treatment.

The Journal added that he had an older brother (Benjamin Philpotts, born in 1917), also serving in H.M. Forces. Benjamin Philpotts lived to be 82, dying in 1999 in Nottingham. Currently, we have no information regarding his military service.

An article on the Wikipedia website summarises the history of Stalag 344:

Stalag VIII-B was opened in 1939 to house Polish prisoners, but approximately 100,000 prisoners from at least 16 countries passed through this camp.

Hospital facilities were among the best in all Stalags, with self-contained wards, each with space for about 100 patients. There were operating theaters, X-ray and laboratory facilities, as well as kitchens, a morgue, and accommodations for the medical staff. It  was headed by a German Oberst Arzt (“Colonel Doctor”), but the staff was made up entirely of prisoners including general physicians and surgeons, even a neurosurgeon, psychiatrist, anesthesiologist and radiologist.

There were more than 700 subsidiary Arbeitskommandos working parties set up to house lower ranks(below sergeant) working in the coal mines, quarries, factories and on railways. This was permitted under the Third Geneva Convention provided they were accorded proper treatment and not allowed to work in manufacturing war materials, a restriction frequently ignored by the Germans. The International Red Cross distributed packages and provided at least minimal medical care in the event of the prisoner’s sickness or injury. The number of prisoners in an Arbeitskommando was usually between 100 and 300.

In January 1945, as the Soviet armies advanced into Germany, prisoners were marched westward in the so-called Death March. Some died from the bitter cold and exhaustion. The lucky ones got far enough to the west to be liberated by the American army. Others were liberated by the Soviets, who held them as virtual hostages for several more months. Many were finally repatriated towards the end of 1945 through the port of Odessa. The Soviet Army reached the camp itself on 17 March, 1945.

Ernest Philpotts was a POW from soon after his capture in mid-1941 probably until liberation in early-1945, almost four years. During this time, his wounds were treated and it seems likely that he worked in one or more of the Arbeitskommandos. After surviving this incarceration, he probably had to endure the forced march, but was rescued by the Americans and found his way back to Britain, still a young man aged 25.