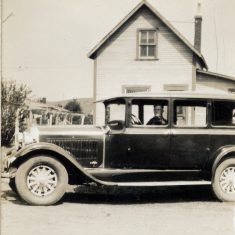 The family car and house near Chicago, with perhaps Victor Robert Marston at the wheel.
Janet Dammes 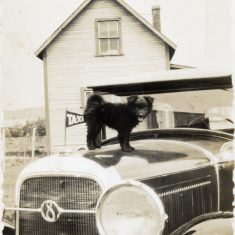 The family car and house, plus the pet dog standing on the bonnet.
Janet Dammes 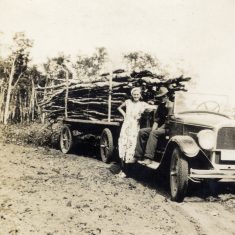 Hauling timber, a couple with their car and trailer piled high with lathes of timber. They may be Agnes and Victor Marston, self-sufficient in their Illinois home.
Janet Dammes 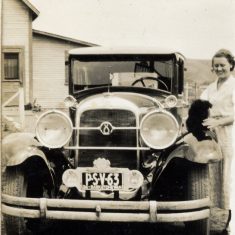 The Marston family car, and standing next to it a young woman who may be Daphne, their niece from Bottesford.
Janet Dammes

These four pictures capture people at a location near Chicago, USA. The family are proud of their impressive motor car and clapper-board house. Though hard to confirm, this may well be the home of Evelyn Marston (nee Box)’s younger brother, Victor Robert Box, who emigrated to Canada in 1920, assuming that he lived in the United States at some time later on. If this is correct, then the man seated in the car is the first picture would be Victor Robert Marston, the woman seen in the third would be his wife, Agnes Hellebrand, and the woman in the fourth might be another of the family whose identity is uncertain, though she looks like the woman in the next picture, taken near Bottesford, who may be Daphne Marston (did she visit her overseas uncle and his family at some point?).