The Marstons, out and about. 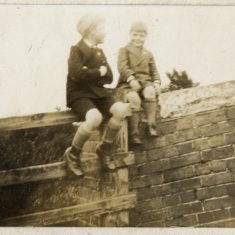 Vic and Frank, at the bridge on Devon Lane.
Janet Dammes 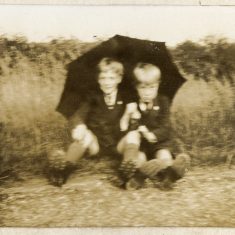 Vic and Frank, at the roadside possibly in the fields on Belvoir road.
Janet Dammes 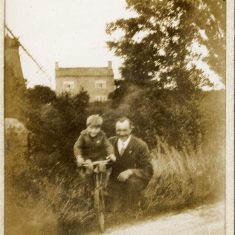 In this picture, a man and boy pose by the side of Belvoir Road just north of the mill by the Grantham Canal. In the background are the mill wheel and house. The boy may be the younger son, Frank Marston.
Janet Dammes 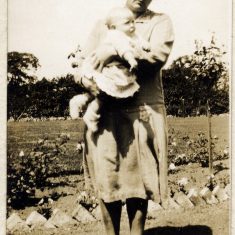 Eve Marston and baby, probably her youngest, Daphne, on a path by a vegatable bed, though the exact location is uncertain.
Janet Dammes

Two of these pictures show Eve and Arthur’s boys, Vic and Frank, out on their own around the village. The third, with the former canalside mill in the background, seems to show a young Frank with a gentleman who may be an uncle. The fourth shows Eve Marston with an infant, possibly Daphne Marston.