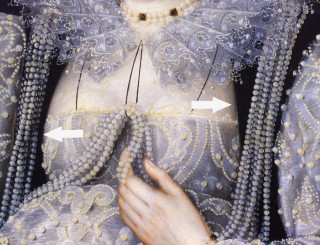 Fig 7.Detail of the Unknown Lady in larger reproduction her waistcoat has a greenish hue.

In order to support my hypothesis that Elizabeth Sidney/Manners was the subject of Gheeraerts’ Portrait of an Unknown Lady, I am going to propose two assumptions, firstly that Herford and Simpson were correct and that she was the subject of the Welbeck portrait and secondly that the Thomas Screven Earl of Rutland’s steward, had been as assiduous in recording items of Elizabeth’s expenditure in 1596-7 as the Masque of Hymenaei entries show him to have been in 1605-6. Unfortunately the generality of the Masque accounts make it difficult to specifically link items such as masking ware, cutwork, a coronet embrodred silke hose, a ruff and a pair of shoes to costume details shown in the Welbeck portrait. However I believe that we are more fortunate with the Unknown Lady and that some details from the accounts can be linked to the costume of the Lady. In his accounts of 1596, December-1597, December, Thomas Screven included a short section of four items which he entitled Money disbursed for my Lady Elizabeth, from December, 1596 to December, 1597.. these entries read :-

Item for one yard of drake’s colour velvet to make up her La(dyship’s) gowne, xxxiijs.

Item for v pieces of gold set with rubies and small diamonds to put to her La(dyship’s) necklace of pearle, viijli. vjs. viijd.

Item for ix yards of white philezelle (i.e. fileselle, a stuff made principally of the silk so called) for a somer gowne at xvijs.-vijli.xiijs.

In the same set of 1596-7 accounts portraits of both Roger and Elizabeth are mentioned in the following entries:-

Item paied for two pictures of my Lord to Mr Peak, the one for my Lady, the other for Mrs Mary Ratecliff ,vjli p417

When considering these accounts particularly the Money disbursed for my Lady Elizabeth section, we should I feel note that it was very untypical for Elizabeth’s rather than Roger’s wardrobe expenditures to be recorded by Screven which probably means the top three Items were for an important and special occasion. However one yard of Drake’s colour velvet would not have been enough fabric to have to make up her La(dyship’s) gowne, alone which suggests that it was part of a larger outfit, such as the small waistcoat worn by the Unknown Lady shown above in Fig 7.